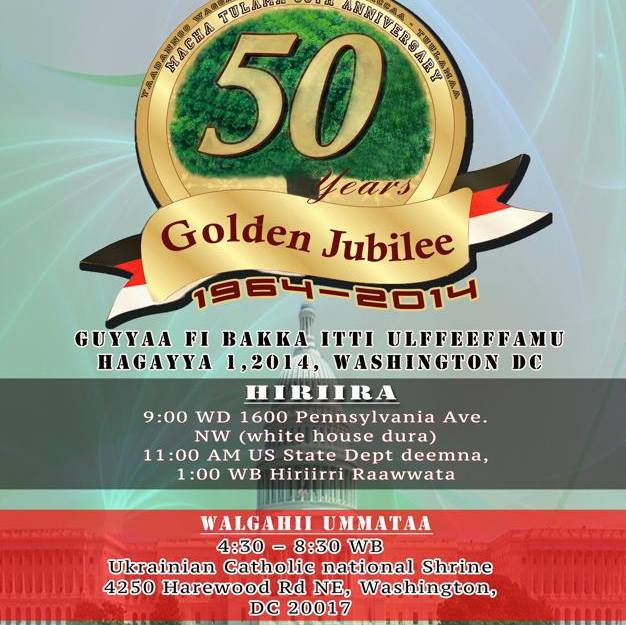 The 50th Anniversary of the Macha-Tulama Association

Background: The formation of the Macha-Tulama Association (MTA) in early 1960s was a watershed moment in Oromo history. In fact, the Oromo, Ethiopia’s single largest ethnic group, have yet to form another civic organization that can rival the MTA whose historical significance has captured the imagination of two generations. The MTA was formed during the final decade of Haile Selassie’s imperial rule as a welfare association to build rural roads and conduct literacy campaign focusing on Oromia, the Oromo homeland.

The organization’s broader aim was to raise Oromo national consciousness. Raise, it did by mobilizing the dispossessed Oromo mass. Within few years, the MTA brought together Oromo leaders from around the country attracting the imperial regime’s wrath.

In 1966, in what was largely considered an inside plot, a bomb blast rocked a cinema in Central Addis Ababa. Authorities wasted no time to crackdown on the group, arresting more than 100 prominent leaders including Mamo Mazamir, who was sentenced to death by hanging following a sham trial. Other MTA leaders such as Hailemariam Gamada, Alamu Qixxeesa, Mokonnen Wasanu, Lamessa Boru, Seifu Tasama and  Dadhi Fayisa received lengthy prison sentences. The regime then banned the organization but this did not deter the development of Oromo nationalism. Activists went underground and continued organizing the Oromo around issues of social and economic justice.

It was an unfortunate episode as this was the first and only civic institution for the Oromo. The MTA rebounded in 1970s and was instrumental in generating momentum for the formation in 1974 of the first pan-Oromo political organization, the Oromo Liberation Front. Since its humble beginning, the MTA has been banned by three successive Ethiopian regimes, most recently by the EPRDF in 2004. During the organization’s many years of ups and downs, its leaders have paid dearly to uphold Oromos civic rights to organize. Notable among those sacrifices is the hanging of Gen. Tadesse Birru, one of the organization’s pioneering leaders.