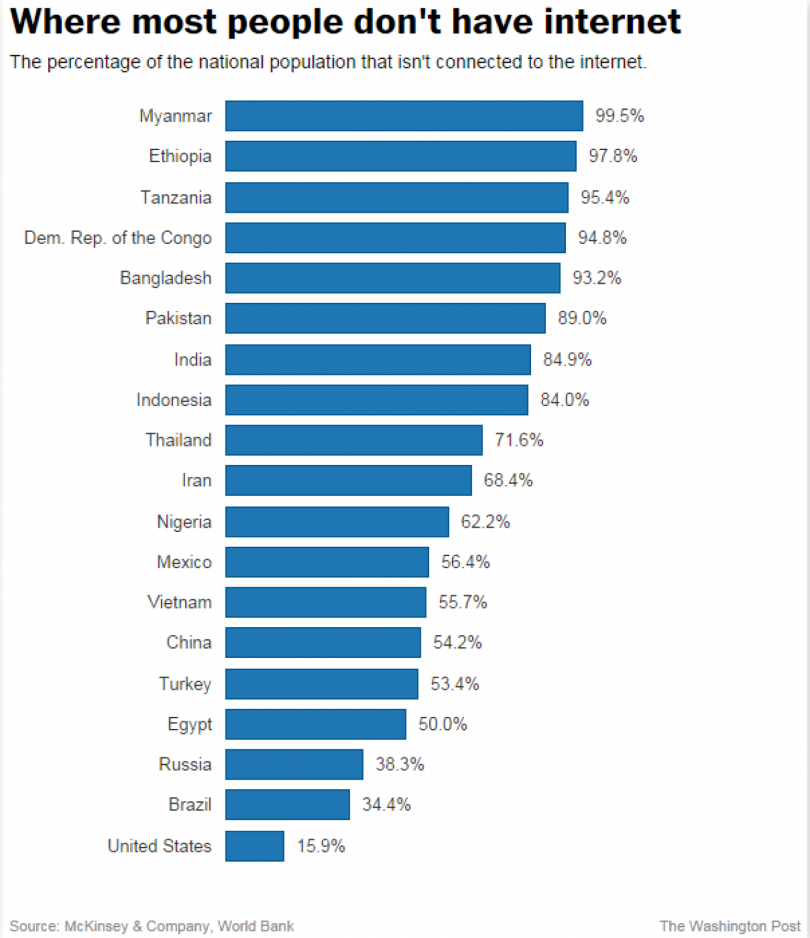 The distinction earned the Horn of Africa nation a second place in the world, only after Myanmar, as one of the few places where nearly all of its population lacks access to the Internet.

“Ethiopia placed 80 out of 81 countries by the Internet’s contribution to development and human rights,” the report said. “The limited adoption rate of both fixed and mobile broadband, if left unaddressed, may hold the country back.”

The report recommends building “infrastructure that could provide more reliable connections as well as address low incomes and affordability and improve the online user experience.”

None of this is new to the millions of Ethiopian who depend on a shoddy broadband and telephone service provided by the state-run Ethio Telecom. The report also has other startling, if not surprising, revelations. For instance, 66 percent of Ethiopia’s 92 million non-Internet users are youth under the age of 25. For a country hailed, including by the leader of the free world, as Africa’s fastest-growing non-oil economy, the McKinsey report paints a bleak picture.

To be fair, Ethiopia is still 82 percent rural and landlocked, meaning it has to direct access to submarine cable capacity. Its reliance on Djibouti, Sudan and Kenya for international bandwidth through terrestrial cables makes bandwidth capacity an ongoing issue, according to the report.

Ethiopia suffers from the full range of barriers for slow Internet adoption that the researchers identified. However, while important, much of Ethiopia’s broadband woes have little to do with geography, language diversion, low level of literacy rate, lack of urbanization and poverty — factors identified by the report as deterrents to Internet adoption. The state maintains a strict monopoly on the telecom sector. Dubbed a “cash cow” for the state, Ethio Telecom is the only Internet Service Provider in the country. “While the Ethiopian government has made developing a national ICT strategy a priority, the telecommunications industry remains closed to foreign investment,” the report observed.

Although Ethiopia acquired telecom service much earlier than many African countries, the lack of competition and innovation has held back the sector’s development. This is further compounded by secondary factors such as extreme poverty and illiteracy. Over the last decade, despite inflated growth statistics, ethnic Tigrean elites and their cronies have amassed all the riches at the expense of the majority. While the rich have gotten richer; the poor has become even poorer. Ethiopia ranks at the bottom two on Oxford University’s annual poverty index, which measures countries level of destitution. Nearly one-third of Ethiopia’s population lacks access to basic amenities.

The McKinsey report notes the expansion of mobile network coverage and increased mobile Internet adoption from 2008 to 2013. However, it said, “3G coverage is concentrated in Addis Ababa and is very inconsistent, while international carriers that could provide 3G service are almost nonexistent in Ethiopia.”

As the McKinsey report shows, Ethiopia’s urban population is only about 15 million. But even urban access to the Internet and mobile is the lowest in the region — Addis Ababa boasting 47 percent Internet and 55 percent Internet-capable mobile phones. Only about 10 percent of Addis Ababans have smartphones. This shows not only lack of investment to expand access to rural population but also how urbanization will not improve Ethiopia’s technological prospects.

The lack of investment in developing Internet and mobile infrastructure is evident from the fact that between 2008 and 2013, the average retail price for mobile devices fell a mere 5 percent. Only about 20 percent of government offices are online. Social media, particularly Facebook, is popular among Ethiopia’s Internet consumers. Some 53 percent of mobile broadband users identified social networking as their top online activity, while e-mail was a distant second at 31 percent, according to the report. Despite this, service remains intermittent. The Chinese built infrastructure across the country, including transmission lines, access points and data centers have so far proven unreliable.