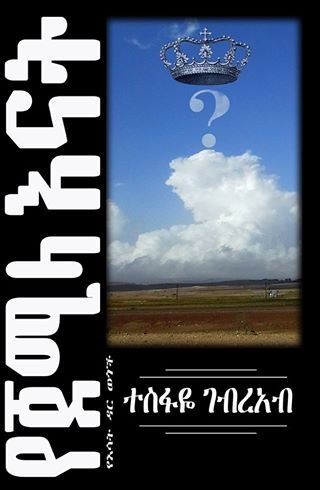 (OPride) — There are few authors more controversial than Tesfaye Gebreab among contemporary Amharic writers. He has authored nine books, including two in which he contributed chapters. His work on Oromo people, Ethiopia’s largest ethnic group, has been met with equal part praise and condemnation.

Tesfaye, who is touring the United States, is back with a new book: Ye Jamila Inat. It is already available online via MeshCart and will be officially released this week. Book signing events are scheduled in Washington D.C. and Minnesota.

The book has been widely promoted on social media. His fans and detractors are waiting to see what Tesfaye has written about this time. Among the Oromo he is hailed as a hero. His decision last month to become Oromo and change his name as per Mogaassa custom has endeared him even more to his many Oromo fans.

Tesfaye’s detractors, particularly ethnic Amharas, have accused him of sowing discord among, otherwise united, Ethiopian people. Tesfaye is keenly aware of this charge. “If Ethiopia’s unity can be shaken by one ordinary writer’s work, it’s fair to conclude that there was never a unity in the first place,” writes Tesfaye in the preface of the new book.

Tesfaye has found a niche, focusing on untold stories and uncovering hitherto falsified historical accounts. In this regard, Ye Jamila Inat, delves deep into the secretly guarded archives of Ethiopia’s imperial palace. Tesfaye acknowledges that his previous work as a journalist for a state-run magazine, before his eventual fallout with the ruling party, gave him unique access to historical records dating as far back as Menelik’s era. These documents include marriage licenses; court cases; appeals; decisions by emperors Menelik and Haile Selassie; reports by Menelik’s war minister Fitawrari Habte Giorgis Dinagde; news clippings about Ethiopia from abroad, etc.

From its title, Ye Jamila Inat gives the impression that the book is about Muslim socio-political problems in Ethiopia. When Tesfaye handed me an advance copy of the book last week, I was curious to know who Jamila’s mother is. “Are you out to make Muslims and Christians fight, as you have done with Oromo and Amhara,” I jokingly inquired. Tesfaye laughed and replied, “You will have to read and be surprised.”

The new work is a collection of 35 short stories: works of fiction based on true stories, articles and anecdotal diaries. Most of the stories in the 220-page book that Tesfaye calls “Ye Isat Dar Wegoch,” roughly translated as fireside chats, are not necessarily new. But it’s some of the minute details that I found most surprising. For example, the chapter on Jamila’s mother is a tale about Haileselassie’s family roots. It’s a common knowledge that Haileselassie had an Oromo ancestry. But few details are known about his mother’s side of the family. Tesfaye notes that the late king mentions his mother’s name only twice in his book, My life and Ethiopia’s Progress. “He mentioned his mother’s name (without mentioning her father’s name) only to say she had me, and she passed away,” Tesfaye wrote.

In the book Tesfaye recounts her Muslim background and also tells us her given name was Jemila. He details how the name was changed to Yeshimebet and efforts by Ethiopianist writers who’ve repeatedly tried to conceal this fact by assigning her a different last name and identity. Tesfaye adds that Haileselassie, who had Oromo, Muslim and Gurage background, hid or disowned his family roots to protect his throne and to be accepted into the Orthodox Amhara-dominated system. He ends the chapter about Jamila’s mother with a poignant observation: Ethiopia’s racist feudal system had the ability to frighten its leaders as with the ordinary people.

Tesfaye is a political writer and keen observer of Oromo-Ethiopian politics. Using the official archival records, he takes bold positions, including in one chapter where he proposes a Horn of Africa union (similar to Lencho Lata’s proposal for forging Horn of Africa as a common homeland for various ethno-national groups in the subregion).

The book also spills the dirty secrets of other past Ethiopian leaders: from relationship to awful deeds they committed against the masses to stay on power. For example, who knew one of Menelik’s daughter was orphaned at age 8 when her mother died? How about an attempt by Sertse Dingil’s wife to make an unborn child blind to prevent him from taking the throne based on a prevailing prophecy, which as Tesfaye notes has greatly contributed to making Ethiopian history a contested, singular narrative.

There are also a few chapters dealing with the relationship between church and state. In one instance, Tesfaye writes about how the official state religion, the Orthodox Church, passed a decree urging people to fast Wednesdays and Fridays and how that was later changed to Saturdays by another decree from the Catholic Church. It underscores the trials and psychological trauma the people of Ethiopia endured in the name of religion. And the violent history of forced conversion and expansion of religion, both Islam and Christianity, to Ethiopia. It made me question not only the faith of those leaders but also why God allowed them to do those things.

It is these kinds of perennial questions and the war between the two churches that forced Abba Zerayakob to take refuge in the forest, according to Tesfaye. While there, Zerayakob prayed and questioned God, searching for answers. He wanted to understand which God is the real God, who he was praying to, who gave him wisdom, why he was there, etc.

Zerayakob hated humans because of their inability to question. He was angry about the fact that people believed they knew a lot and did not want to explore more. After years of contemplation, Zerayakob came to a conclusion that others believed their religion was the right one, much the same way he thought about his own. He believed in God’s existence and the fact that he created the universe but eventually concluded it’s not possible to give this God a name. He subsequently gave up christianity and a religious life.

Overall, Tesfaye has ably and artistically weaved so many historical events into such a short book. Ye Jamila Inat is a snapshot of historical accounts, culture and indigenous knowledge, life in exile, ethnic tension and politics in Ethiopia. Those who read and liked his previous works would greatly enjoy reading this book. As Tesfaye notes in the preface, Ye Jamila Inat will be yet another disappointment for his detractors and those who insist on maintaining a falsified and distorted account of Ethiopia’s past.

It goes without saying that there’s always more than one perspective to every story. Tesfaye is one among those who are curious about the other side of the Ethiopian history. It is also clear that history books are open ended and inconclusive even in countries that developed a culture of documenting and writing well ahead of Ethiopia. In this respect, Ye Jamila Inat will be a great addition to many contemporary works about Ethiopia by historians, writers, film producers, artists and so on. To be sure, Tesfaye is not a historian and doesn’t claim to be one, but most of his books are based on a true story.

As such, instead of trying to suppress a voice different from that which we have been led to believe, it will be better to interrogate both sides of the Ethiopian story so as to use it to understand the past. That is the only way we can shape our future and not repeat the ugly mistakes of yesteryears.

—
*The writer, Tigist Geme, is a citizen journalist and activist based in Washington, D.C.