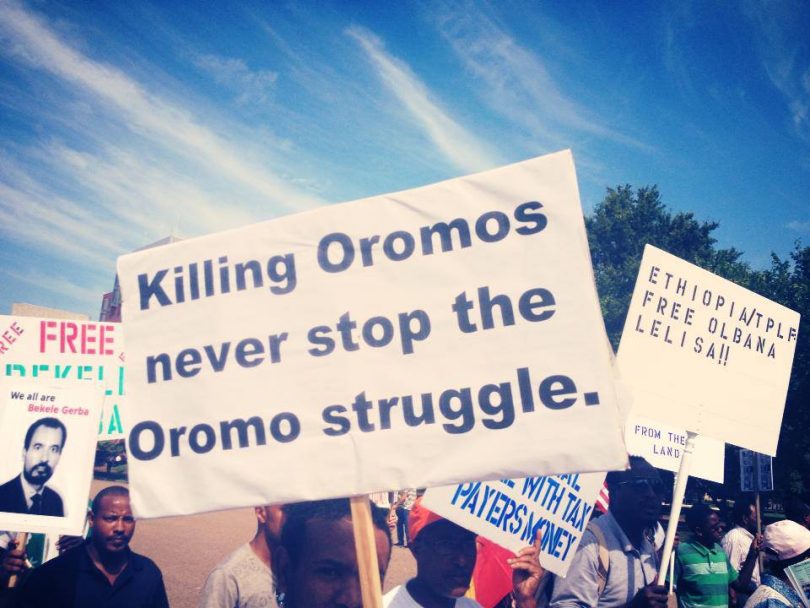 (OPride) —At least 5,000 Oromos have been illegally detained since 2011 based solely on the suspicion that they don’t support the Ethiopian government, Amnesty International said. Many of the victims are held without charge for months or even years and subjected to repeated torture, it said.

Oromos from all walks of life, including peaceful protesters, students, members of opposition political parties, farmers, teachers, medical professionals, civil servants, singers, businesspeople and countless others, were targeted by the arrests, according to Amnesty. While some of the victims were suspected of having links to the outlawed Oromo Liberation Front (OLF), many others were simply accused of ‘inciting’ opposition to the government, the report added.

Amnesty’s report, titled “Because I am Oromo,”  which is based on more than 200 testimonies gathered in Ethiopia, Kenya and Uganda, documents Ethiopia’s discriminate and disproportionate targeting of the Oromo people through “arbitrary arrests, prolonged detention without charge, enforced disappearance, repeated torture and unlawful state killings.”

“Any signs of perceived dissent in the [Oromia] region are sought out and suppressed, frequently pre-emptively and often brutally,” the London-based advocacy group noted in the report. “Family members of suspects have also been targeted by association – based only on the suspicion they shared or ‘inherited’ their relative’s views – or are arrested in place of their wanted relative.”

The Oromo make up more than 40 percent of Ethiopia’s 92 million population. The authorities’ “incessant attempts to crush Oromo dissent” underscores the growing fear of assertive Oromo nationalism. But Oromo activists say Amnesty’s report grossly underestimates the number of Oromos who were actually detained over the last four years. Activists say 90 percent of Ethiopia’s prison population is Oromo (estimated at more than 25,000 political prisoners). This fact has been corroborated by former Ethiopian government officials including Seye Abraha, former defense minister-turned opposition leader, who in 2008 famously noted, Ethiopian prisons speak Afaan Oromo, the Oromo language. Former Ethiopian president Negasso Gidada also noted that there were about 20,000 Oromo political prisoners during his tenure.

Earlier this year, a partial list of 528 individuals sentenced to death and life imprisonment through 2013 underscored the indiscriminate targeting of Oromo people. Of some 528 individuals who were sentenced to death or life imprisonment by the Ethiopian courts, 459 were Oromo nationals, the report said. The disproportionate targeting of Oromo for surveillance and repression has also been reported by Human Rights Watch. “The government uses the specter of an ongoing OLF ‘armed struggle’ to justify widespread repression of Oromo individuals,” the HRW said in a detailed report, released in April. “Thousands of Oromo from all walks of life have been targeted for arbitrary detention, torture and other abuses even when there has been no evidence linking them to the OLF.”

In April and May 2014, Oromo students at all regional universities in Oromia took to the streets to protest the unconstitutional expansion of Addis Ababa’s jurisdiction into surrounding Oromia towns. Dozens of peaceful protesters were killed by live bullets fired at crowds while hundreds were arbitrarily arrested and are still being held at various military barracks around the country. The government has consistently denied reports by international human rights organizations, including Amnesty International, whose staff was expelled in 2011. Two prominent Oromo opposition leaders Bekele Gerba and Olbana Lelisa were detained for meeting with Amnesty’s staff and are serving long-term sentences.

Gerba, who has fully served out his reduced time, was widely expected to be released earlier this year. However, according to family sources, prison officials gave conflicting reasons for his continued imprisonment, including that his time at the Maekelawi prison doesn’t count or his file was misplaced. Both Gerba and Lelisa remain in prison with restricted and limited medical care despite reports that both are severely ill. At least two Oromo activists have died in prison over the last three years from the torture they have endured.