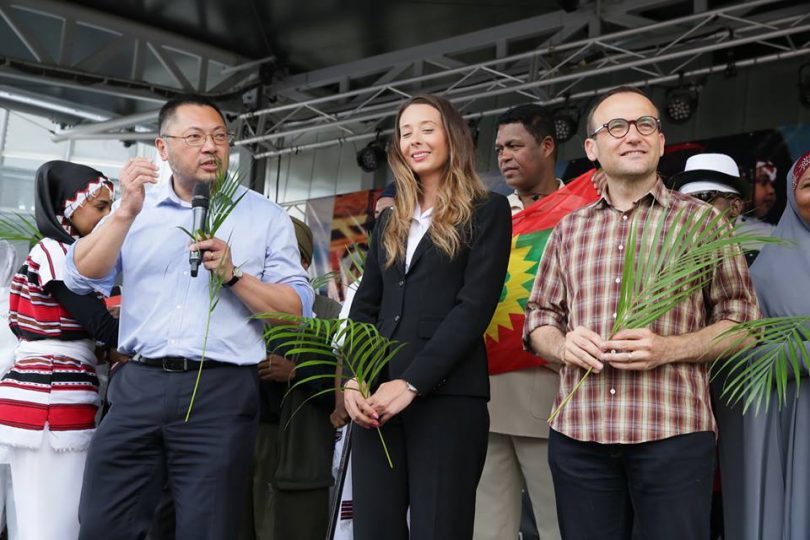 Started in 2008, the Oromia@fedsquare is a community festival organized by the Australian Oromo Community Association in Victoria meant to “celebrate and commemorate the beauty of the Oromo culture.” For the thriving Oromo-Ausralian community, the  event is an opportunity to share their history and rich cultural heritage with the city’s multicultural communities. For members of the Oromo community, it’s also a way of reconnecting with and honoring their customs and traditions.

“Starting Sunday afternoon, people visiting or passing by the Federation Square in Melbourne feel as though they’ve landed in another country in a different continent – Oromia, in the Horn of Africa,” the organizers said in a press release last week. The fedsquare, one of the busiest venues in Melbourne, hosts more than 2,000 jam-packed events and celebrations every year. The attendance of members of parliament Adam Bandt of Melbourne and representatives from Anthony Byrne office, who represents Holt, and Victorian Multicultural Commission Commissioner Chin Tan is an important recognition of Oromos contribution to the country’s multiculturalism. As with other new immigrant communities, Oromos have added color and so much significance to the Australian society in general. Most of its leaders have been recognized and awarded both locally and internationally for their active participation and outstanding contributions.

The event brings together families and friends from across Melbourne. Oromos from interstate and neigbouring countries such as New Zealand ocassionally join in the celebration. This year was not different. Visitors came from Brisbane, Sidney and even as far as Europe. Parents brought childred adorned in colorful cultural attires. This is the community’s way of educating other Australians about their identity while also passing on history and cultural heritage to the younger generation. The event features Oromo dance, spoken word, art exhibition, fashion show, a live-concert and elders blessings.

Amid chaotic diasporic life and recent political setbacks among the diaspora,  Oromia@fedsquare is one event that has not lost its colors and form over the last seven years. In fact, it has become a model for Oromo diaspora events. It brings together Oromos from all walks of life and political persuasions. It’s one place where the community joins hands and sing songs of unity, harmony and longing.

To be sure, unlike most Oromo diaspora events, the Oromia@fedsquare was not simply about lamenting the multifaceted injustices that the Oromo continue to endure in Ethiopia. It’s a magnificent occasion where Oromos embrace and demonstrate their pride. It is a day where Oromia’s multidimensional diversity is celebrated in all its forms: from clothing, artifacts, food  to history with pride and joy. It is a momentous expression of Oromumma, the Oromo identity.

It is also where the youth reaffirms their commitment to preserving Oromo heritage by taking the lead in organizing and showcasing various cultural programs. Most of the activities at this festival were conducted by the community’s active and vigilant youth members. The elders, also draped in Oromo cultural attire, held green grass and a prominent stick (coqorsa and bokkuu. With the Oromo flag flying high around the square, women ululate holding their Siinqee, the symbol of power and womanhood among the Oromo,  and sing in praise of their fallen heroes while the youth and children cheer on. All the while, the fresh aroma of Oromia’s coffee would fill the air. For brief moments, the fed square resembled Oromia, the Oromo homeland — full of joy and freedom.

But this year Oromia@fedsquare has even gotten bigger and better. Children adorned with saddeetta sang shagoyee, whilst those as young as five educated the spectators about the five Oromo odaas. The children also took the centrestage when the band played adding more color and beauty to the event.

This year also ushered in new faces as far as from Germany, young musician and rapper Leencho Abdushakur was invited to entertain the crowd with a mix of poetry, spoken word and singing. We also had other prominent personalities, including Oromo comedian Sadam Haska aka Sadamiyyo from Oromovines.  This year, federation square was not only about singing and dancing, it was about recognition and awards. 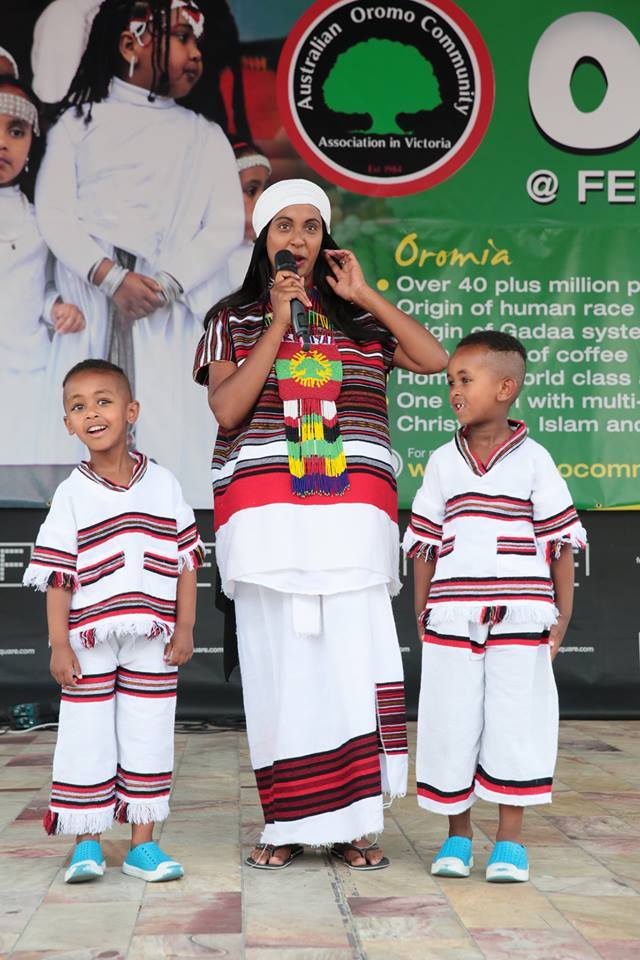 Early Sunday morning, excitement filled the sorrunding area as hosts, Soreti Kadir  and Toltu Tufa walked onto the stage beautified by their Qoloo (red and black striped Arsii dress). Commuters  from the trams, chariots, trains and vehicles stopped to a glimpse of what was happening before their lights turned green.

The event was formally opened with the singing of the unofficial Oromo “anthem”:  Alaaba Oromo. This was followed by a fashion show and dance performces which led many to shed tears of happiness and pride.

Melbourne-based rappers featuring Milkeysa Ahmed and Dammeysa Ahmed aka Dee Banga moved the crowd with their creative and peotic rap and hip hop in Afaan Oromo and English. Through their poetry and rap, the youngsters lamented about Oromo heritage and political struggle. Their song was also about belonging and longing, roughly put as a yearning of someone trying to fit-in or finding one’s place both in Oromia and Australia.

Abdi Johar, a young star from one of the most reknowned cities of Oromia, Dire, sang ‘’Assabelahoo- one of the most famed  songs of the legendary Ali Birra. The ground beneath felt as if it’s literally moving. His voice and the meaningfulness of the song moved the heart and minds of Oromos, young and old. In the euphoria of the moment, the song brought memories of homesickness and a collective sense of statelessness. Of course the band entertainment would be incomplete without the performance of the one and only Kumala Adunya, kicking off his best work with ‘asheeta’ and taking us through the melodies and sounds of Oromia

At the conclusion of formal events, the crowd began to rock and roll Oromo style. As a symbol freedom and peace, white doves were released into the clear sky by the elders and  VIP guestsas crowd the screamed ‘’free Oromia’’ at their highest pitch.

Even after the formal conclusion of the event, the eunthisiastic crowd hang about fidgeting, posing for photos and anticipating about 2015, still in celbratory mood. It is no exaggeration to say Oromia @fedsquare was a celebration of Oromummaa in all of its diversity.