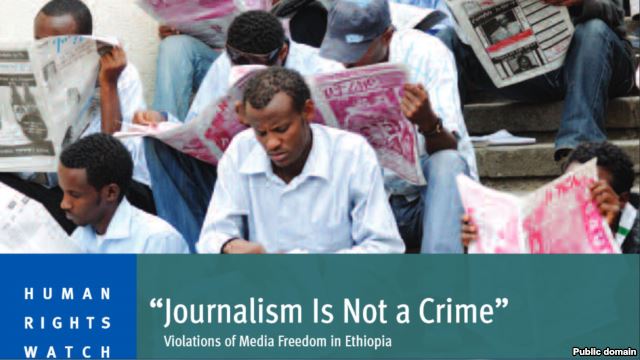 (OPride) — Ethiopia’s systematic repression and harassment of independent journalists has created a bleak media landscape ahead of the May 2015 elections, the Human Rights Watch (HRW) said in a report released on Wednesday.

“Muzzling independent voices through trumped-up criminal charges and harassment is making Ethiopia one of the world’s biggest jailers of journalists,” said Leslie Lefkow, deputy Africa director at the HRW. “Ethiopia’s media should be playing a crucial role in the May elections, but instead many journalists fear that their next article could get them thrown in jail.”

2014 was a particularly difficult year for Ethiopia’s media. At least 22 journalists, bloggers and publishers were criminally charged for doing their jobs while more than 30 journalists were forced into exile, according to the New York-based rights organization. At least 60 others were exiled since 2010.

“Ethiopia’s government has systematically assaulted the country’s independent voices, treating the media as a threat rather than a valued source of information and analysis,” Lefkow added. Authorities used threats and harassment of journalists and their family members, as well as routine jamming of websites and the delaying of publications by state-run Berhanena Selam Publishing enterprise to curtail independent reporting. Ethiopia’s ruling party and individuals close to the government already control much of the country’s print, television and radio outlets.

The 76-page report, “‘Journalism is Not a Crime’: Violations of Media Freedom in Ethiopia,” was conducted from May 2013 to December 2014 based on more than 70 interviews with journalists in Ethiopia and neighboring African countries. The detailed report is an important and timely addition to the growing body of literature on the lack of press freedom in Ethiopia.

While  the plight of a few high-profile Ethiopian journalists such as Eskinder Nega, Reeyot Alemu and the Zone 9 bloggers received global coverage, the HRW report notes that dozens of journalists in Oromia and other regional states remain silenced or face ongoing abuse at the hands of local cadres.

The report also details challenges foreign journalists covering Ethiopia face. Whereas those based inside the country have to consistently exercise self-censorship to avoid irking authorities, diaspora-based reporters have difficulty finding sources on the ground. “Increasingly journalists’ sources are being targeted and individuals are more and more afraid to speak to the media,” the report said.

Others reported being harassed for speaking with diaspora-based outlets, including the Voice of America. For example, a government employee from Oromia was arrested after speaking with VOA’s Afan Oromo service. “They told me I was a terrorist and put me in jail for 21 days,” he told the HRW. “I was beaten each night for the first week and they would burn me on my arms with their cigarettes. They chained me to a table and would beat me and hit me with sticks while they accused me of exposing government secrets to the foreign media. Since I have been released they have not allowed me go back to work.”

The lengthy report also provided key insights into the difficulty of reporting on last year’s #OromoProtests. Journalists interviewed by the HRW said they were turned away by security forces at numerous roadblocks set up near the protests. Journalists for state-run TV Oromiyaa  recalled being accompanied by security officials and having to report false confessions from students. For example, a journalist covering student protests at Adama University in June 2013, told the HRW:

I recorded what they said about how government was trying to portray them as terrorists, but they were just students trying to learn. The people I was with [security officials] took them away to another room; two and a half hours later they came back and they were crying and were shaken up. Their story had changed completely and they told me how they had planned to blow up government institutions and public places. They clearly were just students who had been threatened. I left the campus right there so angry with my government, and after that I had many problems with security officials at my workplace. I was compelled to report to security every day after that.

Another journalist working for a private magazine described her experience covering the protests in another part of Oromia:

I was interviewing people and asking them about their opinions. While this was happening, I was grabbed and forced into a car. They were security officers—they harassed and threatened me, “Don’t take part in this, it is against the government.” They took my mobile phones and my voice recorder. They then locked me in their car for the duration of the protests that day. When they came back they forced me to sign a paper that said I would not interfere in government issues. They then drove me out into the forest and dropped me off there…. I felt like a criminal. Journalism is not a crime, but in Ethiopia you are treated like a criminal just for being a journalist.