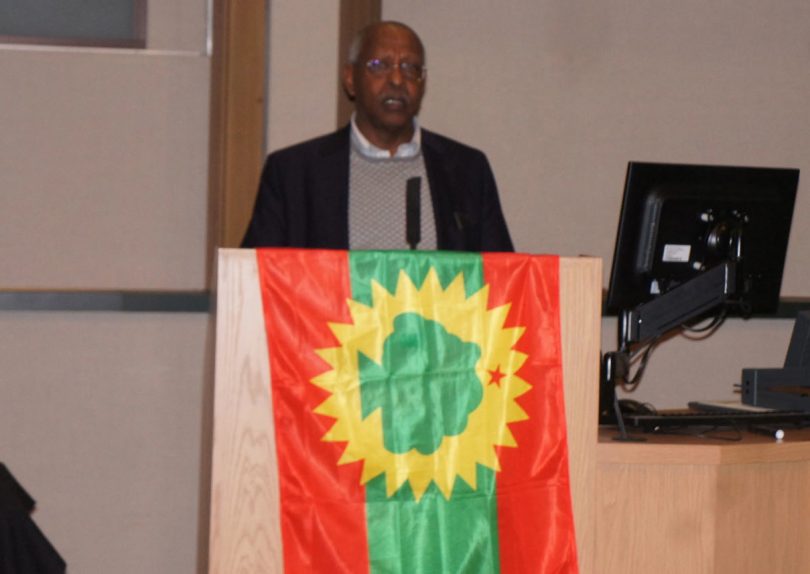 If one were to size up Albasa Dagaga’s recent op-ed, “The Oromo Quest for Independence: The Elusive Leenco Factor,” written in response to Laaloo Guduru’s and Raammoo Cuqulisaa’s pieces, one cannot escape summing it up as a Babel Tower of self-defeating, self-contradictions.

First and foremost, Albasa worked himself into rage and indignation. He does so by making it appear as if acting righteously in response to the perceived “disdain and contempt” against “Oromo nationalists” from ODF quarters. Second, sensing this too may fail, he tries, in compensation, to don the classic garb of all charlatans, shedding a river of crocodile tears. By making it appear as if he was acting in defense of maligned heroes and as morality’s soldier. Third, finding the sheer weight of the building blocks to his Babel Tower of self-defeating self-contradictions still too burdensome to shoulder on his own, Albasa came up with a trick favored by individuals suffering from delusion: dressing his response as the pained reaction of an aggrieved collective self by making it appear as if he is speaking in the name of “our people” and at other times in the name of “Oromo nationalists.”

If this was an attempt to overcome the image of a boxed-up loner that his writings paints him out to be and pose as a genuine Oromo nationalist with the best interests of the Oromo people at heart, this is a brilliant gimmick. But the problem is, as I will show latter, that this can hardly be the case. Fourth, when all his attempts to rescue his Babel Tower of self-defeating self-contradictions from collapsing upon itself miscarried, he quoted extensively from two conservative writers, Edmund Burke and Marcus Tullius Cicero. This was done with a grand ambition: to lend a badly needed veneer of respectability to an otherwise despicable diatribe and a below-the-belt personal attack. Even here though, the poor guy came up short by not bothering to check if and whether the analogies he wanted his readers to draw were apt.

Now to the contradictions. Albasa belabors to convince us that compared to his “spotty good deeds,” Leenco has caused irreparable damage to the Oromo struggle. To diminish and whitewash Leenco’s contributions, Albasa makes two crucial arguments.  First, that the Oromo struggle made “little achievements,” which betrays his unfamiliarity with past and present Oromo social realities. Second, unlike his colleagues who gallantly fought “the enemy head-on inside the uncomfortable Oromian jungles, infested with mosquitoes and wild beasts,” Leenco fruitlessly spent 20 years “residing in his secured penthouse/tower in the Sudan.” In these, Albasa stumbles in three respects. One, in failing to tell us why these same colleagues, who should know better, commit sacrilege by allowing Leenco to be “crowned the leader of the OLF.” Two, Albasa faults Leenco for “leading his ‘subjects’ via a remote control.” The fact of the matter is that no senior Oromo leader has for close to twenty years since 1997 ventured to “the uncomfortable Oromian jungles, infested with mosquitoes and wild beasts.”

Albasa fails to tell us why he is charitable to those who continue to wield the remote control from afar while charging those alleged to have committed the same crime 20 years earlier with high treason. Third, Albasa credits Leenco with wisdom for “avoiding the hardship and trauma” during the anti-Dergue struggle waged by OLF.  While lamenting his opponents for failing to “understand the true meaning of gallantry, sacrifices, heroism, and valor,” Albasa seems to be confused about the true meaning of wisdom. Unless of course Albasa’s is talking to us in Orwellian speak where to do wrong is wisdom and to do right is ignorance. To my dismay, Albasa failed to make any distinction between those who are actually facing the enemy head-on and those who are only “insisting” to do so from a safe distance.

The mother of all contradictions, Albasa belabors to convince us that Leenco is an insignificant personality in the Oromo struggle. While accusing Laaloo and Raammoo for aggrandizing Leenco’s role, a charge which the record does not support, Albasa ends up endowing him with mystical abilities. Between 1994 and 2012, Leenco held no helm of any Oromo organization. Albasa fails to tell us why the attempt of a single person to “unilaterally trying to change the Political Program of the OLF” should be a matter of concern to anyone, let alone any organization. Moreover, Albasa fails to explain how such an insignificant personality managed to “hold the Oromo struggle hostage” and prevent Albasa & Co from building the “brute force” with which to “free Oromia from the yoke of TPLF.” Unless Albasa’s “gallantry, sacrifices, heroism, and valor” is only on paper, no single person, let alone an old man holed up near the North Pole for over two decades, cannot do this unless endowed with some supernatural powers and uncanny qualities.

Unless Albasa is unconsciously suffering from the very “disdain and contempt” for his people that he accuses others of, it is beyond credulity to fathom how anyone, let alone Albasa who portrays himself as a learned and well-read person, would believe that such an insignificant person can single-handedly start and sustain a “civil war” lasting “for the past 40 years.” The fact is neither Laaloo nor Raammoo associated Leenco with any supernatural powers but rather Albasa, in which case he should be the one accused of exaggerating Leenco’s role. For them, Leenco is an Oromo nationalist, one of many martyred or alive who have given their lives for their people’s cause for freedom and justice.

Now to the false analogies.  Quoting Burke, Albasa puts himself in good company, among the very few “good men” who are “indebted” to their people never to allow “the triumph of evil.” Self-charity is understandable. What is bothersome is Albasa’s callousness to call all those who disagree with his self-contradictory and self-defeating arguments traitors. This line of argument approximates that of Pol Pot and the authors and ideologues of totalitarian ideologues than that of the Jeffersonian vs. Hamiltonian debates that ushered “a new nation, conceived in liberty, and dedicated to the proposition that all men are created equal.” What Albasa’s type of reasoning, for he is not alone, portends is not the Free State of Oromia “unmolested by Abyssinian rulers” that he preaches about but rather the many failed states that came to ruin as a result of tyrannous orthodoxies that equate dissent with treason.

This is where the self-defeating aspect of Albasa’s piece comes in.  For Albasa, “Oromo nationalists” is an exclusive club. Membership is arbitrary. While some join through self-selection, others are forever barred labelled as remnants of “EPRP, MEISON, Derg, and former OLF,” “Ethio-Oromos,” or hired “local mercenaries” and “loyal surrogates.” In Albasa’s Hobbesian world, enemies are everywhere. Such a paranoiac world is anathema to Oromo nature and what the nation needs most at this point: closing ranks where possible and respecting each other’s differences where unanimity is difficult. Why? Because his closed worldview does not allow him to see what anyone can see: the division in the Oromo camp is not between Oromo nationalists and traitors but rather between genuine Oromo nationalist

Last but not least, Albasa makes one last desperate act to gain a veneer of respectability and show off his credentials as a learned man, a mask to camouflage his unveiled personal attacks, through a quote from Cicero. Even here, Albasa could not get it right. What Cicero was alluding to was not the known enemy that “carries his banner openly” with openly declared views and intentions but one who “works secretly.” Both ODF and Leenco have been carrying their banners openly.  ODF’s objectives are no secret. Leenco’s view is also a matter of public knowledge, at least since his book, “The Ethiopian State at the Crossroads.” Where is the secret? Perhaps in Albasa’s figment of imagination? Go figure.

* The writer can be reached at esiinxaro@gmail.com.