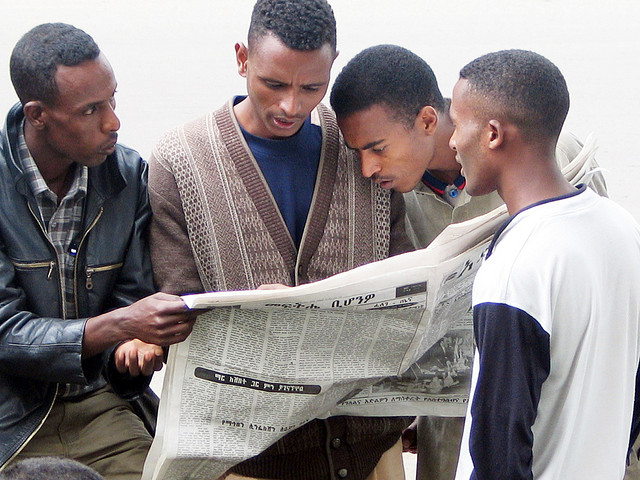 (OPride) — About a dozen elections have been held in Ethiopia over the last century, most of them during the reign of the incumbent regime.

But the country has never seen significant progress as a result. If there was any change during this time, it came courtesy of popular revolts that shook and even deposed Ethiopia’s tyrannical rulers.

The storyline is the same each time: The mass pushes for change; a new government comes with new promises and then builds its muscle to silence the people. Following the 2005 election, the late Prime Minister, Meles Zenawi outright told the opposition to organize an armed rebellion, as he did, in order to take political power. The failure of Ethiopia’s experiment with electoral democracy needs detailed analysis. In this piece, I will focus on restrictions on free press and freedom of expression.

In countries where ethno-national identity has been a mobilizing factor for controlling and sustaining political power, the role of independent institutions is of paramount importance. Independent and democratic institutions enhance government accountability and defuse the potential for ethnic conflict. Impartial institutions serve as a medium for resolving conflicts related to ethnic and political diversity. Such institutions could help break the hegemony of the few or the supremacy of one party or group through dialogue and public engagement.

Critical discussions foster rational and independent thinking, and further the country’s political and economic development. Knowledge increases only to the extent that it is subjected to criticism. Ongoing, open public discourse can help detect errors and formulate new public policies and political strategies. In a democratic system, this is the default role of independent media. Ethiopia appears to be going on an opposite track: Branding all critical voices as terrorists or criminals will only lead the country to its doom.

Truly independent institutions take people’s aspirations beyond kinship and ethnic sentiments to forge choice based alliance with others for a greater, commonly shared cause. In the absence of a forum that neutrally arbitrates between citizens, and citizens and the government, people are ultimately reduced to the status of subjects. By contrast, institutions that treat all stakeholders impartially on their national concerns boost the citizens’ sense of belonging to the political community they live in. Forcing or coercing people, directly or indirectly, to participate in any political process including elections has far reaching negative consequences.

Independent institutions facilitate the stage for diverse interest groups to forge a common ground. It is only through robust exchange of ideas that groups with divergent interests can acquire a shared purpose. Public dialogue and negotiations on how and by whom political power should be exercised leads to the emergence of a level playing field which makes peaceful co-existence feasible. Unlike Ethiopia’s ostentatious experiment with democracy, taking meaningful steps to build such institutions should precede periodic elections. Otherwise, counting the number of national elections held in a given time does not change the natural consequences of wrong policies.

Elections make the government accountable to the judgment of its people by producing a legislature that is representative of the electorate’s policy preferences. Different sections of the public have different political, social and economic needs. The purpose of election is to connect these policy preferences to the elected government’s agenda. However, this depends on the quality of the system and how representative and inclusive the legislature is.

The model of analysis that treats elections as mechanisms of accountability explains that the sanction of the electorate is to extend or not to extend the incumbent government’s tenure. In this case, voters make their choices based on their evaluation and perception of the government’s performance. If they are satisfied with its performance, they will vote for the party or parties in power; if they are dissatisfied, they will throw it out and elect new leaders. This model looks far less demanding of the voters because all they need to know is which party is in power and which one is the opposition. Being satisfied or dissatisfied with the government and its policies, or the outcomes thereof is all it takes.

However, it’s not as simple as it sounds since identifying what the government has truly done during its last term depends on many factors including subjective projections of whether another party could have done the same job better. Therefore, the sine qua non of accountability is clarity about the alternative policy proposals. It is important for voters to carefully vet who can govern better once the incumbent is gone. Thus, not only the incumbent but the possible alternatives in any given election and their policies must be easily identifiable. This leads us to an important democratic institution: Free press.

Free media serves as the primary vehicle for informing the public about the range of policy alternatives. Without free and robust media, the public has no other way of knowing and evaluating the performance of the incumbent administration, as well as the opposition’s proposals for a new government. The calculation is not limited to simply knowing about the available alternatives in a given election but knowing whether voters’ sanction can effectively vote out the incumbent without risking something worse.

In fact, dictators use this human impulse to predict the future and our fear of the unknown to sway voters toward their party. TPLF has effectively inculcated this tactic in voters’ mind, positioning itself as an indispensable linchpin that holds the country together. Voters’ calculation of voting out the incumbent depends on free media that informs and gives the public a chance to openly debate about the future. TPLF’s Ethiopia is conducting periodic election in the absence of this indispensable democratic institution with sole expressed intention of retaining the ruling party’s continued dominance at any cost.

The Ethiopian government employs every means possible to keep alternative ideas out of reach for most of the electorate. Independent journalists and bloggers are either labeled as terrorists or purposely disorganized and incapacitated. The 2009 anti-terrorism proclamation encroaches on free media to hinder them from airing alternative viewpoints or cover issues deemed sensitive to the regime. What constitutes terrorism is deliberately left vague to encompass any or all publications or speech critical of the ruling party. As a result, almost all critical journalists have either been forced into exile or are facing draconian terrorism charges, or serving lengthy sentences. Others have to continually self-censor in the hope that they are spared a similar fate.

Ethiopia’s war on free media and the ruling party’s desire to silence critical voices doesn’t stop at its borders. Given brutal repression of free press at home and EPRDF’s monopoly over the public media outlets, independent media outlets are forced to reach their audience via internet or expensive satellite broadcasting. But the TPLF government is doing everything to block, jam or interfere with these initiatives using European and Chinese-made surveillance technologies. In other words, TPLF is engaged in a cyber-warfare with its diaspora-based critics. Most Ethiopia focused websites and blogs are blocked in Ethiopia. TV and radio signals are routinely jammed.

The TPLF government wants to impose its monopoly on truth by suppressing alternative viewpoints that it deems irreconcilable with its long-term objectives. Otherwise, no governance raison d’être dictates getting rid of alternative voices in a diverse nation such as Ethiopia. If independent voices are fully suppressed, as it is the case in Ethiopia, there is no logical reason left for wasting public resources on fruitless periodic elections.

In a system where there is no institutional arrangement for arriving at political decisions through a competitive struggle for people’s vote, conducting periodic elections does not bring any meaningful political progress. Absent such institutions as free press and a truly independent electoral body, let alone building a democratic system, it will be very difficult to even keep the state intact.

In 2010 the EPRDF shamelessly claimed winning 99.6 percent of seats in parliament. However, democracy and sustainable development do not derive from the supremacy of handpicked legislator. Ethiopia needs free media that can challenge the current privileged source of information forcing the wind to blow only in one direction.

It’s farcical to talk about democratic election while at the same time obstructing the country’s diverse political views from reaching the public for critical evaluation. In the absence of free media and independent institutions that can hold the government accountable for its actions and abstentions, conducting periodic elections does not serve any purpose except the unnecessary damage to properties and loss of lives that often follow this useless political exercise.

If EPRDF wants to save the country from the unexpected, it should give the people of Ethiopia the chance to hear and evaluate alternative policies by opening up the media environment and making itself ready to face demands for accountability before conducting elections.

*The writer, Israel Fayisa, is a former Supreme Court judge in Oromia, Ethiopia. He can be reached at israelitansa@yahoo.com.