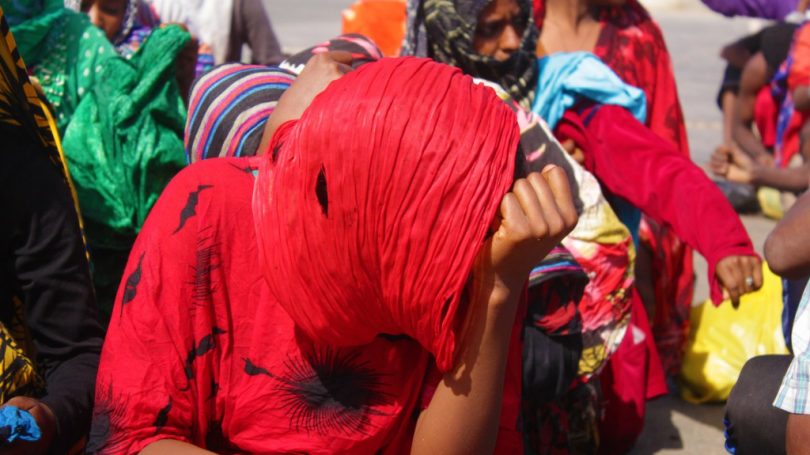 (OPride) — Yemen is reeling from a devastating Saudi-led airstrikes and a protracted political crisis with no end in sight. Even as foreign countries scramble to evacuate their citizens to safety, hundreds of Somali and Ethiopian migrants are still attempting to cross the Gulf of Aden, braving the harsh and unforgiving journey in search of a better life.

A smuggler stands at the seaside. He counts a group of migrants sitting at the bench by the water. “36 Oromos and 67 Somalis,” he says.

“They are 103,” one of his friends shouted, before escorting the migrants to a small boat waiting in the water.

They lined up the hopeful travelers and instructed them to begin boarding. The smugglers helped the migrants one by one and threw them inside the boat as the terrified migrants stumbled and some were close to drown. Within a few minutes, all of the 103 migrants, including 12 children— five of them under the age of five— were onboard.

This is Marero, a small village east of Bossaso, in northern Somalia. Marero is home to a network of human traffickers that extends far beyond Somalia’s borders.

This particular network of smugglers starts in Ethiopia, more than 2, 000 kilometers from Bossaso, where hundreds of migrants begin the trek to Gulf countries each week. The Ethiopians cross into Somalia at the town of Burama in Somaliland— on foot.

Somali migrants have used Marero and its surrounding villages for years to escape the violence in Somalia, but the number of immigrants rose drastically in the last 10 years.

In 2012 alone, more than 107,000 people, 25 percent women and minors, many of themunaccompanied, have crossed the Red Sea into Yemen, according tohumanitarian agencies in the region. Twenty seven percent of these migrants usedthe Puntlandcoasts as a transit point.

Fuad Ibrahim, 18, is from the Oromia region in Ethiopia. He left his home just before dawn a month ago, leaving his parents and six of his siblings behind.

“They didn’t know that I was leaving for Saudi,” he said of his family. “I and my friend planned to leave. We didn’t tell anybody our plan, we kept it secret.”

“We boarded to a lorry from Buroa. We paid all our money to them [smugglers], because they told us that we will go to Yemen,” he continued. “Then when we reached Lasanod where they told us to go down and walk on foot for hours before they meet us at a village near Lasanod.”

The migrants were told the long trek on foot was necessary to avoid detection by local authorities. Unlike the troubled southern Somalia, the semi-autonomous Somaliland and Puntland states enjoy relative stability and have a fledgling security apparatus.

Toyda Sufi Abdirahman took a journey similar to Ibrahim’s from Calanqo in Eastern Oromia, Ethiopia. She left in the early hours of a morning whilst her family were still asleep and unaware of her intentions. A Somali smuggler helped Toyda and 27 other Ethiopian migrants, who wanted to go to Yemen, across the border.

“We gave him 5,000 Birr ($250) each,” she said. “But when we reached Tog Wajale—a small town near Somalia-Ethiopia border—he told us to go on foot and meet him the other side of border, but he left with our money and never saw him again.”

The journey across to Yemen takes up to eight hours. The arrival of speedboats and a very well organized network of smugglers have turned Puntland into an epicenter for human traffickers. “It is only 36 hours to return to here,” Abdiqani Ahmed said, boasting about how his men can now smuggle migrants to Yemen three times a week.

Ahmed runs a migrant transit center from makeshift houses built with orange tents, tucked away about 1.5 miles from the village of Marero. Every morning he receives new arrivals.

Migrants from Ethiopia often travel in large groups, but due to tightened security at the border and crackdown on traffickers in Ethiopia, smugglers now move people in smaller groups. But they gather everyone together in Bossaso where Ahmed meets with other smugglers once a week.

“Migrants came from Ethiopia, southern Somalia and few of them came from nearby areas,” the 50–year–old smuggler told meme during a recent interview, as he removed Khat, a narcotic leaf chewed all across East Africa, from a black plastic bag. He stuffed the green leaves into his mouth throughout the conversation.

On a typical trip across the Gulf, the smugglers make upto $10,000—that’s $100 per person for 100 people. Speedboats are the second most expensive means of transportation in Somalia after flights. For example, a trip from Bossaso to Mogadishu costs $70 by bus. But it costs $100 by speedboats. A plane ticket can cost as much as $140. While there are no reliable statistics, the speedboat industry generates millions of dollars every year.

Migrants often confront harsh treatment on their way to Yemen. Rape, kidnapping, looting and arrest are rampant. A reality that Fuad and thousands of others from Ethiopia did not prepare for. Their dreams were cut short when the Puntland police arrested them in Garowe, the regional capital.

“The plan was to go on foot whenever we are close to a city, but police came before we got off the lorry near Garowe,”he told me.

He was taken into custody but later rreleased, after paying 3,000 birr ($150) to police. TCMNews couldn’t independently verify this claim.

“I got separated from my friend,” Fuad said.

“We last saw each other when we were arrested in Garowe, he was taken to a different jail. I don’t know if he is still in jail, returned to Ethiopia or even travelled to Yemen.” Fuad has since made it to Yemen safely, according to his friends.

Ethiopian soldiers stopped Toyda and five of her friends, all women, at the border with Somalia. She claimed that the soldiers took the women to a house and asked them to strip down their clothesand raped all of them.

“They took my phone and all the money that I had,” she recalled sweeping away her tears. Her voice broke occasionally as she counted her ordeal before she got to Bossaso where she is now searching a job to raise enough money for her eventual trip to Yemen.

Ibrahim Ahmed is a local farmer from the Oromo community in Bossaso. He first came to Bossaso 15 years agoto take the same journey that Fuad, Toyda and others are desperate to embark on. But he changed his mind and decided to try out his luck in Puntland.

“Migrants influx to Puntland dates back to 1990s,” he told me in fluent Somali. But new rules prohibiting human trafficking from in Puntland is adding to the growing list of concerns for migrants already in transit.

Local authorities say the influx of refugees, mostly from Ethiopia, creates a huge burden on their resources. The burden includes lack of basic facilities for the refugees as they “often gather into a very crowded spaces in the town, making endemics almost inevitable,”according to Barri, a police commissioner in Bosasso.

“Refugees gather at places where they feel at most secure, be it food security, their personal safety and so on,” Barri said. “Therefore they live in very crowded areas around the city center. They can go to main markets on foot where they can look to make ends meet, however, this makes them very vulnerable to endemics.”

“Criminals and thugs use these neighbourhoods as hideouts,” the commissioner added.

”In addition to security concerns, the migrants create burden on other sectors that must share resources with them.”

Fuad and the 103 migrants have reportedly made it into Yemen safely but were unable to go to Saudi Arabia because of the ongoing fighting in Yemen. They join the 250,000 immigrants from the Horn of Africa, who are already stranded in the war-torn nation. The new arrivals are unlikely to claim asylum or be registered by the UNHCR because the conflict.

Editor’s note: The Camel Magazine published a version of this story last month. We are republishing it here with minor edits with permission from the writer. For more information please visit TCMNews: http://thecamelmagazine.com/somalia-migrants-journey-to-better-life

—
*The writer, Said Mohamud Isse, is the editor in chief at the TCMNews, and founder of THECAMU, a multimedia company based in Somalia. He studied mass communication at Jomo Kenyatta University of Agriculture and Technology in Nairobi, Kenya.