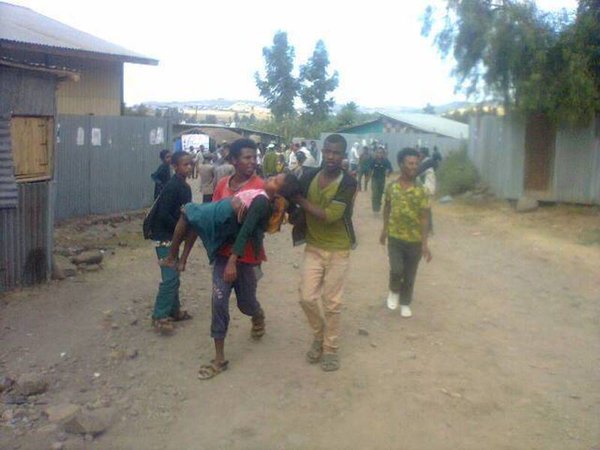 The Oromia police on Wednesday said the situation was “under control,” acknowledging the death of one student protester in Guliso district in Western Oromia. At least three Haramaya University students remain in critical conditions after police and the Agazi special forces roughed up peaceful protesters on Tuesday. (An unnamed Haramaya University student told the Voice of America Afaan Oromo service that two protesters were killed.)

Oromo student protests have become a fixture in Ethiopia’s modern political life. A year ago, Ethiopian security forces shot and killed dozens of students and jailed thousands after protests broke out over the unconstitutional expansion of Ethiopia’s sprawling capital, Addis Ababa, into Oromo areas.

The protests returned again last week. The students are demanding a halt to the planned implementation of the controversial Addis Ababa and the Surrounding Oromia Special Zone Integrated Development Plan, or the master plan. But they also have a number of local grievances related to non-participatory approaches to development. For example, in Ginci town, Western Shawa zone, where the latest round of protests began last month, the students oppose the transfer of school compound to a regional cabinet, the sale of Ginci stadium to investors and the clearing of nearby Chilamo forest to make way for further development projects.

It’s an all-too-familiar story. The central government in Addis Ababa proposes a development scheme that does not involve local stakeholders. College and high school students take to the streets in protest. Security forces respond using disproportionate force. A handful of students are killed and many more wounded and incarcerated in preventive arrests. The diaspora holds solidarity rallies at Western capitals and the story gains marginal references in the media.

After a few months, as the story begins to fade from the limelight, despite the stiff opposition to it and loss of life, the government moves ahead with its proposed plan or project. Then it happens again as we have seen over the past week.

It is a worrisome trend indeed. The Oromo question has become the Achilles heels of Ethiopian politics. And the heavy-handed crackdown on student protesters has heightened Oromo’s already fraught relations with Ethiopia’s ruling party, EPRDF, now in power for close to 25 years.

But, for all its potency and potential, the protests have also lacked coherence, leadership and clear direction to bring about lasting solution. The government knows this. And it has responded using brute force time and again to quell these largely disparate uprisings. True, the lack of leadership is no fault of the students. It’s insurmountable to be an activist in Ethiopia today. Dissent is highly criminalized. The Oromo dissent, both real and imagined, even more so. There are few avenues for air societal grievances. The media and civil society are virtually dismantled. The Oromo opposition faces ever greater scrutiny.

It is time for Oromo political organizations, in and outside the country, to come together, put aside petty political differences and devise a sustainable strategy to end the recurrent killings and incarceration of Oromo students. We have seen the unity mantra many times before, particularly from diaspora-based Oromo organizations. But the recurrent killings of Oromo students and the continued suffering and displacement of Oromo farmers calls for a fundamental change. Meetings and diaspora solidarity rallies can only do so much; it is time for the Oromo to return to the drawing board and forge a unified front to challenge the Ethiopian regime by all means necessary. Diaspora activists and the Oromo media can amplify the voices of the protesters but must do so without fanning the situation with empty rhetoric or without appearing to cheerlead the protests given that the protesters have absolutely no protection or redress, judicial or otherwise. (e.g., Diaspora-based activists should refrain from any suggestion that the latest protests are a continuation of the much politicized Fincila Diddaa Gabrummaa or that it’s a work of  the so-called Qeerroo).

Student protesters have long been the vanguard of Oromo rights in Ethiopia. But the greater Oromo public must now stand in solidarity with these students. Every so often, the government writes off genuine grievances as demands of young students misled by diaspora-based anti-development forces. The public’s greater involvement would break this narrative and any suggestion that the students opposition to the Addis Ababa master plan and other development projects is a work of few anti-peace provocateurs that can simply be silenced by use of force. This is why the students should take time and coordinate their resistance by establishing communication channels across multiple college campuses and high schools. There are clear and marked improvements over similar protests in the years past, but greater coordination is largely absent.

Where is the OFC?

Today’s protesters are armed with social media and better positioned to coordinate their efforts. In theory, the local Oromo opposition, which espouses a nonviolent resistance, can play a critical role in linking and organizing the student movements. However, the Oromo opposition faces severe restrictions to even hold public rallies. Still, that can no longer be an excuse. A movement organized around civil disobedience should not wait for permission from a repressive state. All it needs is broad-based public support for its goals and effective communication skills and tools.

The main Oromo opposition, the Oromo Federalist Congress (OFC) on Wednesday has threatened to organize a nationwide strike. It should act on those threats by calling and leading a national day of rage. It’s a fool’s errand to expect the Ethiopian regime to respond differently than it did in the years past. Sacrifices, including the loss of life, must be part of that calculus as the OFC leader, Bekele Gerba, indicated earlier this year. Oromo students are already paying heavy prices. A little more coordination and a broad-based public participation in the protests could radically alter the status quo.

This year’s protests come at a crucial point. Ethiopia is struggling to minimize the effect of an El Nino-induced drought that is undermining the government’s “miraculous” economic development narrative. The protests pose yet another challenge to the outward image of the EPRDF government. That’s all the more reason why authorities may, in fact, use even more disproportionate force to quell the protests.