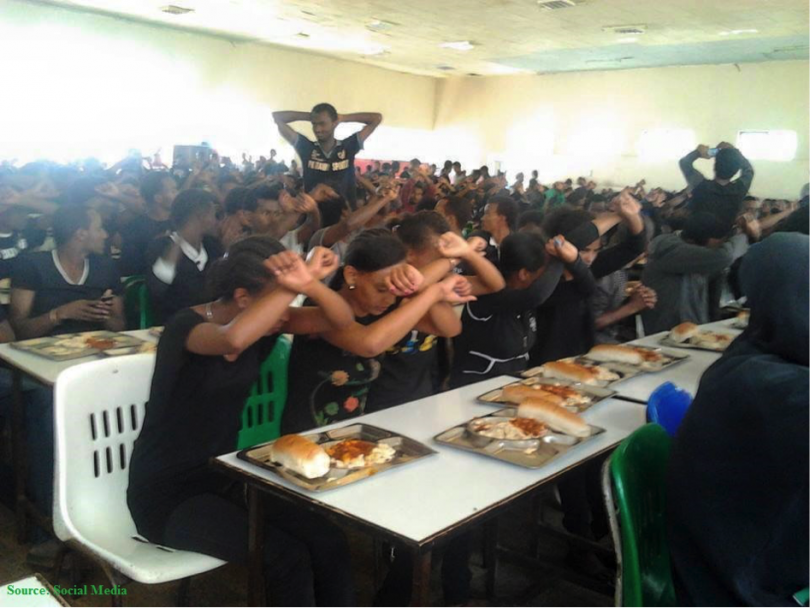 Today, in the 21st century, when mankind marches to form a permanent colony on Mars, Ethiopia is still looking for the breadline. It is shameful but true. Successive Ethiopian regimes have failed the people.

The United Nations and international aid agencies put the number of people needing emergency food aid at 15 million and growing. The regime in Addis Ababa did not waste time to blame El Niño, a global weather condition that causes a rise in sea surface temperature in the equatorial Pacific Ocean. That’s a dubious claim.

El Niño occurs every two to seven years while Ethiopia’s drought has persisted every year. There is no doubt that the global climate change had contributed to this vicious cycle, but the failure to devise a sustainable strategy for dealing with the recurring famine is a human error. The truth of the matter is this: Ethiopia is not among the top list of the countries that El Niño may hit hard. If the regime in Addis Ababa continues to evict smallholder farmers, which amount to more than 85 percent of Ethiopia’s total population, the problem will most likely persist longer.

The worst historical drought, which caused the 1973/4 famines in Ethiopia, occurred in the aftermath of El Niño years. It happened in a La Niña year that was preceded by the strong El Niño (a rise in +2 oC) in the 1972/3. That famine cost the lives of around 300,000 people and saw the end of emperor Haile Selassie’s regime. A decade later, the 1984 famine killed more than 400,000 people, also in a post-El Niño year, and became the main catalyst for the fall of Mengistu Hailemariam’s communist regime.

According to a BBC investigative report, then-rebel leader Meles Zenawi and his ruling Tigrayan People’s Liberation Front (TPLF) siphoned millions of aid dollars from the famine victims to buy weapons, which helped them to grab power in 1987. The 1999/2000 famine, which occurred in the aftermath of 1997/8 El Niño year, was the worst recorded incidence of famine since the 1980s with more than 8 million people needing emergency food aid, but excess death was averted because of unprecedented donor’s response. 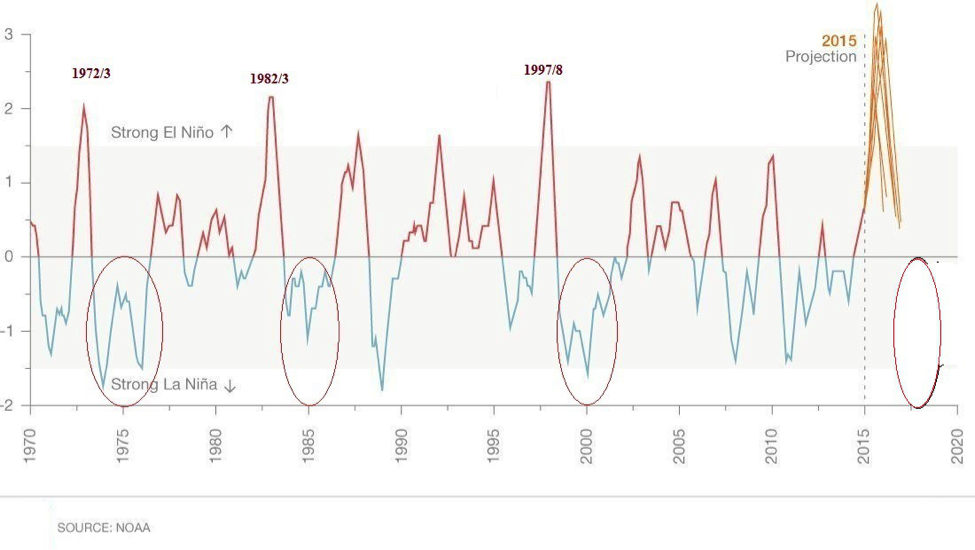 Yet again Ethiopia is hit by the worst drought in more than 30 years (i.e. since 1984). UN agencies are estimating that one-fifth of the population will need emergency food aid by the beginning of 2016.  Perhaps the worst is yet to come since 2015 is a strong El Niña year and donors are already stretched out as a result with the refugee crisis in the Middle East and North Africa. But it remains to be seen whether the current Oromo students protest and the ongoing famine will result in regime change as it happened in 1974 and 1984.

Under TPLF’s quarter century rule, life went upside down for a majority of Ethiopians. For farmers, in particular, things went from bad to worse as their livelihood accelerated in a downward trajectory. The government land policy, which displaced millions of farmers from their land either in the name of forced villagization or confiscation of their land for investment has created millions of aid-dependent families. Most of the displaced were not given enough compensation or technical skill to navigate the corrupt bureaucracy or adapt to the new way of life and environment. As a result, once productive citizens are now forced to beg in the streets with humiliation.

The proposed ‘Addis Ababa Integrated Master Plan’ is one such policy, which will create mass eviction of millions of smallholder farmers with no consideration to their fate. Authorities maintain the students are protesting against the development of their own state capital and the nation’s capital in apparent attempt to divert attention and criminalize dissenting voices. The student’s demand is loud and clear: ‘We are not against Addis Ababa’s development, but rather against the illegal and unconstitutional eviction of Oromo farmers from their land in the form of a land grab that the Master Plan will cause. These are all legitimate demands that need to be addressed by the government.

Ethiopians are not fortunate to have leaders who care for the people. As with their predecessors, the current rulers have no intention to improve the livelihood of small farm holders but rather to exploit it to their benefit. Increasing agricultural productivity or instituting basic climate change adaptation strategies should not be so difficult. After all, climate change is not particular to Ethiopia and production of maize to feed the people is not that complicated. The current agricultural model is outdated. It is the same method as agrarian communities used at the dawn of civilization. The lack of implementation of fundamental concepts of farming such as crop rotation for better nutrient management or irrigation and heavy reliance on rain-fed agriculture, coupled with the lack of information on climate change, has created a vicious cycle of drought and famine.

Ironically, Ethiopia is ranked among the top tier countries in the world for fresh surface water resources with more than 12 major rivers and 14 major lakes, totaling a combined annual discharge exceeding 120 billion cubic meters. Consider the following: more than 80 percent of the fresh water resources in Egypt originate from a single Ethiopian river. Egypt receives less annual precipitation than Ethiopia. That the Egyptians can produce enough food to feed their population while Ethiopians starve to death is simply incomprehensible.

The government’s failure to tackle the high level of adult illiteracy, especially in rural areas and remote communities, is another major contributor to the current crisis. Illiteracy hinders one’s potential to access information and respond to changes in an environment. The negligence is not surprising: educated people have been the number one threat to successive regimes in Addis Ababa. Despite some improvements over the last two decades, Ethiopia remains among the bottom ten in the world for adult illiteracy rate.

Ethiopian regimes keep the people illiterate to lord over them forever. As Frederick Douglass, a Black American man who taught himself how to read and write and finally escaped bondage, said, ‘knowledge makes a man unfit to be a slave.’ The minority-led regime in Addis Ababa understands what a learned man can do. The government’s heightened focus on higher education expansion is happening amid a complete disregard for quality, especially considering the lack of academic freedom in the institutions, the open presence of spies and constant curfews after every event. In most places, students have no access to adequate sanitation let alone basic teaching materials and laboratory facilities. The higher institutions are simply serving as cadre recruitment base and youth internment camp.

Unless an inclusive government, which will engage people in the reconstruction of the country, is instituted in Addis Ababa, the current problem will most likely persist. The regime in Addis Ababa should abstain from killing innocent students for exercising their constitutional rights. It should also cease bombarding the public with an unsubstantiated propaganda of more than a decade of double-digit economic growth when 5th of the population is getting by on emergency food aid allocations.

*The writer, Kurabachew Duba, is a postdoctoral researcher at Duke University and former lecturer at Bahir Dar University in Ethiopia. He can be reached at kusidu@gmail.com.