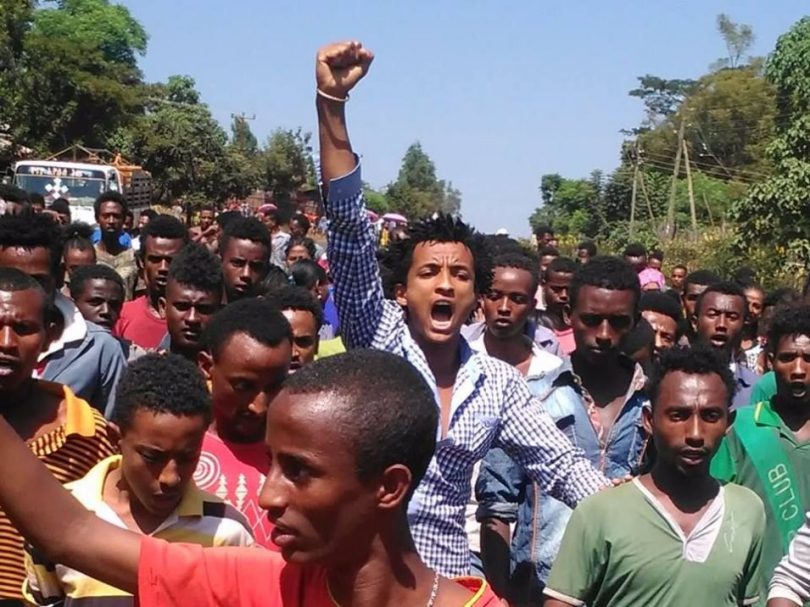 (OPride) — Ethiopia’s Oromia state remains tense after weeks of student-led protests, which left more than 100 people dead and hundreds wounded. The Addis Ababa Master Plan served as an impetus for the protests, but this is not a single-issue movement.

The dispute over the Master Plan cannot explain the root cause of the protests or capture the essence of the public defiance being witnessed across Oromia.

True, the master plan is one of the Ethiopian government’s many ill-intended projects meant to evict Oromo farmers from their land against their will. However, the upsurge is a cumulative effect of public resentment and discontent against the ruling party’s human rights abuses and its quarter a century of iron-fisted rule.

The government in Addis Ababa has never shown the slightest respect toward any nations and nationalities of Ethiopia in its entire reign. Regardless of how dreadful and destructive, its policies are or the public’s opposition to it, the regime has always been adamant about implementing its agenda. At no time in its nearly 25-year-long reign did Ethiopia’s ruling party ever cancel a single plan because of public uproar.

The Ethiopian People’s Revolutionary Democratic Front (EPRDF) is made up of four loosely aligned pseudo political organization, namely OPDO, ANDM, SPDM, and TPLF. The dominant Tigrayan People’s Liberation Front (TPLF) created the first three brownnosers. As a result, these PDOs often parrot whatever TPLF leaders decided. In theory, these yes-men represent nations and nationalities in the government. But the Ethiopian public knows full well that they lack any decision-making power and often play the purpose they are manufactured for.

The public is tired of the crimes TPLF is committing across the nation using these PDOs as instruments of suppression. Ethiopians all over the country and the Oromo people, in particular, had had enough of TPLF’s brutality and its centralized governance style. This is the core message of the Oromo protest movement.

The TPLF regime’s deception, killings, outright robbery, abuse of power, subjugation and suppression is what the people of Ethiopia are fed-up with and are protesting against.

Ethiopian security forces have been killing civilians for more than two decades. The massacres in Gambela, Hawassa, Water (Hararaghe), Borana and Guji, Ambo, Addis Ababa (during the 2005 elections), Gamogofa, Benishangul Gumz, Ogaden and currently in Oromia and in Gondar are but few TPLF’s untold atrocities. The killers have never been held accountable for these crimes. No independent investigation has ever been conducted. The PDOs and regional militias are given orders to kill and to tell lies on media on behalf of their masters.

TPLF utilizes a divide and rule tactics to cling to power. No stone is left unturned to divide the people of Ethiopia. For long, they tried to create a rift between the Oromo and the Amhara, by exploiting the historical animosity between these two communities. TPLF knows that together the Amhara and Oromo constitute 70 percent of the country’s 100 million population and could easily challenge its power. Mindful of this fact, TPLF invented clashes, conspiracy theories, and Machiavellian propaganda tactics to fuel animosity between the Oromo and the Amhara.

For years, the elites from the two groups have fallen prey to TPLF’s traps. For example, the Amhara elites have failed to pragmatically deal with Oromo nationalism and dismissed genuine Oromo grievances as secessionist or un-Ethiopian. Similarly, Oromo elites have been obsessed with accusing all Amhara elites of promoting Amharanization under the guise of Ethiopianism.

As a result, the Oromo and Amhara elites have wasted several opportunities for tabling their differences and focus on the broader picture: changing, or, at least, challenging, TPLF’s tyrannical rule in unison. This gave TPLF free reign to consolidate its control over the country and undermine the country’s constitution and sovereignty.

The recent statements of solidarity from non-Oromo political parties and religious organizations are indications that this artificial stalemate is no more. This should be welcomed and encouraged. The regime in Addis Ababa is adept at fabricating conspiracies to put the people of Ethiopia in nonstop conflicts.

The same is true for Ethiopian faith groups. TPLF thrives on inventing a boogieman to scare minority ethnic and religious groups. The hand grenade recently thrown at Muslim worshippers at the Grand Anwar Mosque in Addis Ababa is one such plot designed by the TPLF to create suspicion among the faithful.

No doubt, there will be other fabrications and plots by the TPLF as the resistance against its oppression continues. We must remain vigilant and examine the regime’s inflammatory messages at all times. The public and opposition parties must continue to demonstrate solidarity and find common grounds by foiling the government’s inflammatory and diversionary tactics.

It is less likely that TPLF leaders would simply cancel the implementation of the controversial Master Plan. They may instead opt for shelving the plan and wait for a more suitable time. They could also choose to do the necessary groundwork behind the curtain and tell the public the issue has been dropped. They are unabashed about using falsehood and another runaway tactic to quell tensions when their power is threatened.

Regardless of what happens to the Master Plan, the struggle must go far beyond the question over the draft plan. This is a struggle for freedom of speech, representative government, freedom of association and an all-inclusive economic growth. It is a fight against organized robbery by the ruling elite. The entire population of Ethiopia including the Tigray people have been victims of TPLF’s fraudulent rule. The current system of governance, which is based on pretentious ethnic representation, is facing the most serious and widespread challenge yet.

This is why the Oromo protests must continue even if TPLF leaders drop the Master Plan. It is high time for other ethnic groups in Ethiopia to join their Oromo brethren and say NO to TPLF’s rampant abuses and rotten government.

Ultimately, the demands of Oromo protesters are far beyond questions over the Master Plan. It is a movement to do away with the murderous regime in Addis that has embarked on a killing spree against unarmed school children for more than two decades. Ethiopians of all stripes must join them and say NO  to a system that has put away thousands of people in unknown prisons and torture houses. It is time to fight back and end a system that has forced millions to flee their country and die trying to cross the Sahara desert and high seas.

Our diaspora solidarity must not be a one-day rally event. It should evolve into a multifaceted and all-inclusive long walk to freedom, for all.

The writer, Tullu Liban, is a journalist and academic based in Canada. He can be reached at libantullu@gmail.com.