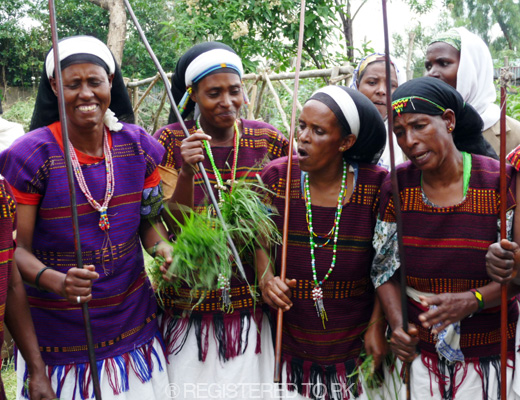 In SOLIDARITY WITH #oROMOpROTESTS

Loving memory of our martyrs, new and old.

to the sky for divine intervention

And for relief and remission

from Kings, Queens, and Sultans

And held in hand

Their life on earth and soul in the thereafter

But the head’s wit

Free to cherish and relish

Himself and neighbor on the choicest land

Dealt to it by his Waaq’s generous right hand

Had no use for heaven

Made by themselves, courtesy of the many and manly orating wise heads

With no arms or charms

Had no one to please, pleased as it was

With its up-high-raised place on earth.

Should injustice rear its head, out rushed ahead, the womenfolk, Siinqe at hand

A tyrant’s head to demand, and get, at day’s end

Alas, oblivious to what promiscuous fate promised and portended

As the sky was lit aglow with the bullets’ death-tipped head, O awaited unprepared, banking on daamaa, his horse’s galloping speed and the arrows’ precise hit

Looking at it before November with eternal despair, one saw Qallu’s unbuttoned garb with contempt if not hate

Long gone were the soothing comfort of founding myth, shaken from without and within undone

Unable to rise to the occasion and stand in erection

Its beauty for good gone like that of a deflowered virgin

Trampled upon as the proverbial serpent

By the learned, and the ignorant

And an iron-booted tyrant, left to right, a loot’s loot unfolded

My little world of O, as if reconciled to its cruel fate, busied itself to treating and entreating

The Qaallu having fallen far below Qaallicha, Siinqee stood aslant bereft unhappily collecting dust as if unresentful of the neglect

With the fruits of injustice all around to reap, whose width and breadth few grasped and many grappled with

Its dystopian diaspora, reaping no crop and wisdom from cramming page after page of sacked and sacred books of utopian paradise

Yet with faith in itself skin deep

Mighty intolerance to make up the difference with

As O wailed at home in silence and solitude

Sapped of earthly energy and heavenly hope to unshackle the chains, break the walls, that divided and conquered its mangled spirit

And undermined its moral universe that was.

Can O  survive in perfect tatters? Many wondered agonized.

Over trivia and “isms”

As Nihilism engulfed and untruth triumphed uncontested over truth, the differences no longer mattered

As problem after problem multiplied, glib answers mushroomed, O, now a serf bled from without as from self-inflicted wound

What a difference 400 years, made!

The strife that would never halt, suddenly stopped

When eschewing confusion, O relearned to feed, sate, and settle on worldview of its own

Eyes steadied on the prize, it begun to walk still and tall arresting the freefall

Odaa, the tree of wisdom flowered to grandeurs old and exploded onto the vain world

For the day that was never to come, finally arrived impromptu and unexpected.

When Siinqee-Qaallu joined hands at the rim, the river of wisdom filled to the brim

Shorn of dogma and mysteries—from end to end, O rose in tandem

To celebrate the colorful bridal bliss in all O’s diversities

Ready to grasp hold and clasp freedom with its thorny horns

In an instant outburst a clarion call for a new dawn, grounded in a dignity that was all too human

The hollowed and hollow bells of justice rung far and wide

Echoing universal truth, reverberating across the width of land and high seas

With self-confidence in abundance, free at last, O will dance and sing in coherence

In a matter of time its voices will rise to starry heavens & the deaf world now in suspense listens!