(OPride) — For paying the ultimate price for our freedom, for inspiring generations of Oromo youth to fight injustice in all of its forms, for the freedoms already won on the back of their sacrifices and for uniting the Oromo mass to persevere in resisting unjust domination, Oromo Martyrs are OPride’s Oromo Person (s) of the year.

The late father of Oromo struggle Waqo Gutu Usu, who until his death in exile in 2006 fought against three successive Ethiopian repressive regimes, had a simple solution to the Oromo predicament: if possible to uproot injustice in his lifetime, or to raise a generation of revolutionaries to finish the job.

He was the leader of the Bale Oromo resistance movement which was sparked in the early 1960s over the illegal seizure of Oromo land by feudal overlords and the state’s failure to address the masses’ growing social and political discontents. Waqo’s was one of the pioneer examples of sustained Oromo armed struggle against an unjust rule. The sixties decade also saw the birth of many other Pan-Oromo movements, including the Macha and Tulama Self-help Association and the Afran Qallo music band. These largely disparate movements served as precursors to the formation of the Oromo Liberation Front a decade later.

The Oromo struggle for justice and human dignity continues to date fueled by the untold courage and priceless sacrifices of multitudes. Throughout the many decades, one question — the question of land — formed the core and enduring element of the Oromo resistance. Now as it was then, land dispossession and the consequent marginalization of the Oromo on their own land remains the most resonant Oromo grievance against the Ethiopian state.

The Oromo say dubbiin lafaa, dubbii lafeeti, meaning the matter of land is a matter of life. From the Bale people’s movement to the rebellion of Oromo revolutionaries such as Agari Tullu of Salale and Jaara Abba Gadaa to the Oromo protests of 2015, illegal land grab and mass eviction of Oromo farmers has been the rallying cry of generations.

This is not to suggest the long-unaddressed Oromo question is limited to questions of land or land ownership. However, the forced occupation of Oromo land — in the name of development or otherwise — has been a key part of its popular resistance. Land remains a highly contentious issue for the regime in Addis Ababa and among the opposition alike.

The struggle to return to the Oromo what is rightfully theirs has taken so many lives. Many known only unto Waaqa, the Oromo God, and their families. In the words of one revolutionary singer, manni haa lakkawuu kaa ani harkafi miila dhabe, meaning I will let the houses do the counting since I lack the means to appropriately document the Oromo martyrdom. The price has been steep but the fruits of their struggle and sacrifices are now visible across the vast Oromo country. 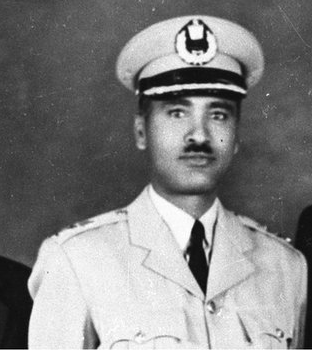 The children yearned by Waqo, Jara Abba Gadaa, Haji Adam Sado, Hailemariam Gamada and Mamo Mazamir are here in their millions not just to continue the fight against oppression but also to end it, once and for all.

We would particularly like to take this opportunity to honor the 2015 Oromo protesters, who braved live bullets and kept marching for freedom and chanting slogans in liberty’s sweet voice while being mercilessly beaten, gunned down, and arrested in their thousands. For the men and women, young and old, who gave their lives saying NO to the endless land grab, today we celebrate your victories and honor your sacrifices. For the martyred protester, who with the full force of the last breath of his/her life, died asking questions about the rule of law, good governance, and Oromo self-rule, which the regime itself has half-heartedly admitted were legitimate and constitutional, we shall sing praises of your bravery for years to come.

Your sacrifices will not be lost in vain; your names will be engraved in the hearts and minds of future revolutionaries, born and unborn, and the allure of sweet liberty and the bitter and foul stench of injustice will echo down the ages. 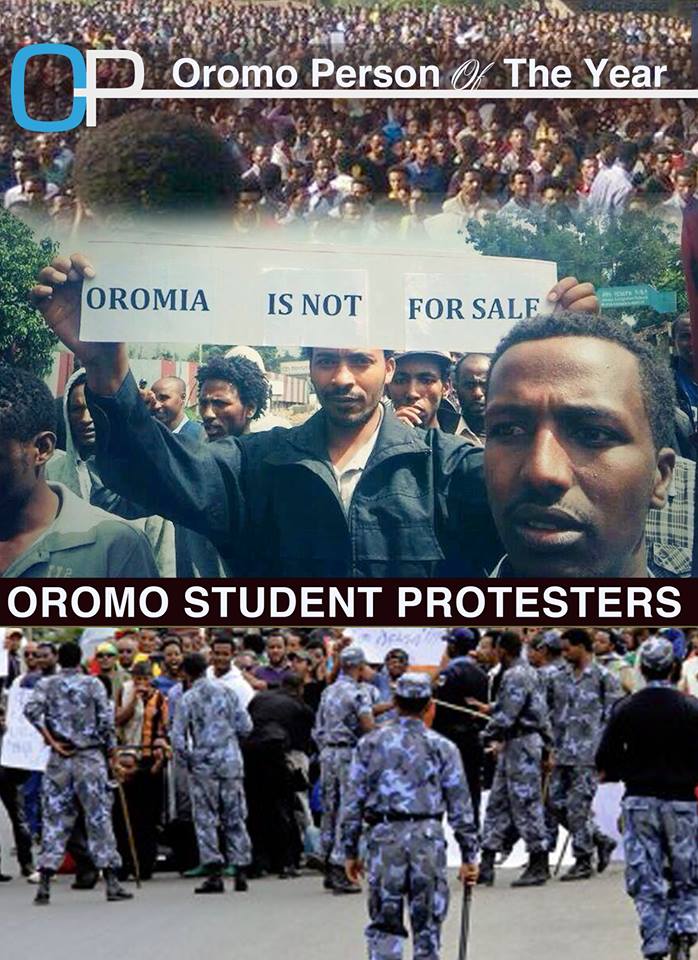 A year ago we recognized Oromo Student Protesters “for energizing and unifying the Oromo public both at home and in the Diaspora, for keeping the beacon of liberty from being extinguished, for selfless sacrifice to advance Oromo rights and for bringing international media attention to the plight of Oromo people.”

It is tragic that we have to mourn and write about yet another year of bloodshed and continued repression. This year’s protests began in Ginci town in November. As in 2014, the protesters oppose the controversial Addis Ababa Master Plan, which aims to expand the federally administered Ethiopian capital’s jurisdiction into surrounding Oromia towns and villages erasing Oromo identity, language, and culture as has been done time and again ever since the 1880s.

This year’s protesters have come from all walks of life transcending all political, religious, regional, gender, age, and occupational differences. This is the first national Oromo uprising.

At least 122 people have been killed in the ongoing crackdown. Locals say the ensuing arrests of Oromo activists and protesters are unprecedented since at least 1996. Prominent Oromo leaders including Bekele Gerba, the deputy chairman of the Oromo Federalist Congress (OFC), Dejene Tafa, OFC’s secretary, and many others have been rounded up over the past few weeks.

The ruling Ethiopian People’s Revolutionary Democratic Front (EPRDF) has stuck to its usual script: arrest and kill its way out of the crisis instead of genuinely addressing Oromo grievances. Toward that end, the government has since instituted dusk to dawn curfews. Breaking into people’s houses, the army beats and detains those suspected of organizing and taking part in the protests.

In yet another futile attempt, the trigger-happy regime in Addis Ababa has swung open the floodgates of hell to contain the sustained and resilient protests, but the protesters trudge on undeterred, propelled and steadied by the determination that the innocent blood of the martyrs, unjustly and callously shed, will not be in vain. More than ever before, the Oromo youth appear determined to rid Ethiopia of tyranny, injustice and misrule. Through their martyrdom, they have brought the Oromo on the riverbank of the promised land of freedom.

The Oromo martyrs, OPride’s Person (s) of 2015, through boundless self-sacrifice and its irresistible capacity to inspire generations of revolutionaries continues to keep the beacon of freedom alighted, the hope alive and bring Oromo’s yearning for freedom from subjugation into the view. In this somber moment, even as Ethiopian security forces murder preteens in cold-blood, stifle dissent and torture proponents of nonviolence, we refuse to simply mourn their losses but instead honor them knowing full well that we will soon celebrate the sweet fruits of their martyrdom in our emancipation.

A luta continua, vitória é certa. Happy Holidays to all!