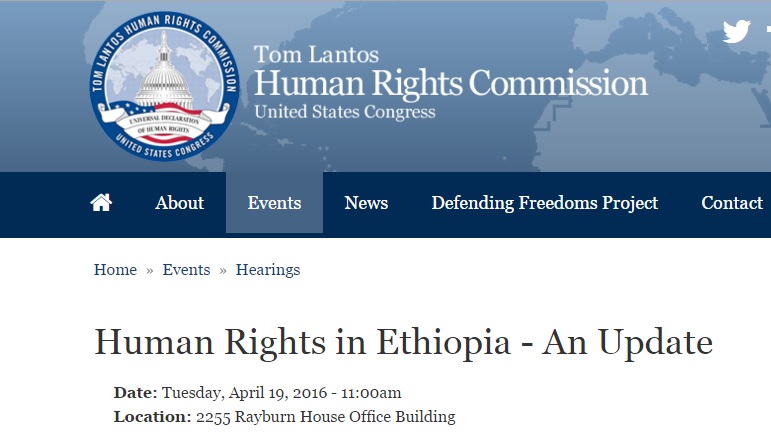 journalist, editor, and founder of OPride.com

As prepared for delivery

Thank you for inviting me to speak about the worsening human rights situation in Ethiopia, and in particular, about the escalated use of political violence against peaceful protesters in the Oromia region.

Please allow me to also express my deep gratitude to Rep. Ellison for facilitating this briefing and for his continued engagement with the Oromo Community in Minnesota.

I commend the Commission for holding this important briefing during this critical time. Ethiopia is facing the most serious political crisis since the incumbent regime came to power in 1991. The ongoing Oromo protests are unprecedented in Ethiopia’s recent history, with the exception of the 1974 revolution, which toppled the late emperor Haile Selassie.

The protests began last November in response to the government’s so-called “Master Plan” that sought to expand the Ethiopian capital Addis Ababa’s jurisdiction into Oromia, the largest of nine linguistic-based federal states.

The Master Plan—which authorities scrapped in January following widespread protests—would have expanded the capital’s boundaries from 54,000 hectares to 1.1 million, more than 20 times its current size. It proposed placing 36 Oromia towns and 17 districts under Addis Ababa’s jurisdiction. Imagine Washington, DC expanding its current boundaries by 60 times without consulting its surrounding states or compensating those who will be forced to leave their homes, and you can begin to understand the extent of the problem.

For the roughly 6 million farmers who were never consulted, but who were on the path of this massive urban development scheme, the Plan meant displacement from their ancestral lands, a loss of their livelihoods and cultural identity.

So far, more than 400 civilians have been killed and thousands wounded since the protests began. Victims include children (as young as 8), the elderly and even pregnant women. At least in two instances, police opened fire on a wedding party simply for playing a music they did not approve of.  In one case, the groom was severely wounded the night before his wedding day and spent weeks in hospital.

Thousands of Oromo youth continue to be hoarded into overcrowded detention centers where torture is commonplace and those detained are not charged of any crime, do not have access to lawyers, and can be held indefinitely without due process. Bekele Gerba, the deputy chairman of the opposition party, the Oromo Federalist Congress, has been in jail since December although he’s seriously ill.

The government response to the protests has been haphazard. Initially, Ethiopian authorities downplayed the protest’s scale, blaming it on few “anti-peace elements, extremists and armed gangs.” But rather than calming the situation, this vilification of peaceful protesters only fueled more anger and more protests. As the protesters’ ranks swelled, reaching all corners of Oromia, officials admitted that the protesters had legitimate grievances. As the death toll rose, Ethiopian officials in January told a visiting U.S. State Department delegation their excessive use of force was a mistake.

Despite this admission of guilt and a half-hearted apology by Prime Minister Hailemariam Desalegn last month, the killings, mass arrests, and inhuman abuse of Oromo activists in various detention centers across the country continue unabated. They say the use of excessive force was a mistake, but not a single member of the military has been held accountable, nor did they release the thousands of protesters, who were swept up during the brutal crackdown. This suggests that the ruling party’s admission of guilt was only a tactical maneuver, not as a corrective measure.

In fact, Ethiopia’s rulers continue their doublespeak by trying to minimize long-standing Oromo grievances and demands for freedom and self-rule to simple questions of reducing bureaucracy and corruption, using the euphemism of improving “good governance.”

It’s important to understand that while the Master Plan served as an immediate trigger for the current uprising, the underlying cause is frustration and anger at the Oromo people’s continued economic, cultural, and political marginalization within the Ethiopian state. In town after town, the protesters’ have been chanting: “Oromia is not for sale,” “Killing is not an answer to our grievances,” “Free Oromo political prisoners;” and “We want genuine self-rule.”

These are not radical demands. Ethiopia’s 1995 constitution promises ethnic groups, including the Oromo, who constitute half of Ethiopia’s 100 million people, self-governance to protect their linguistic and cultural identity. However, those guarantees are undermined by the ruling party’s highly centralized, top-down decision making and development planning.

Further eroding the federal structure, Oromia has been under emergency military rule for the last three months. In some parts of Oromia, nighttime curfews remain in effect. Venturing out after dark puts a person at risk for assault or arbitrary arrest. Parents are being forced to sign papers that absolve the government of any responsibility if their children are killed in future protests.

Afaan Oromo, Oromia’s working language, is denied similar recognition at the federal level. As a result, less than 10 percent of ethnic Oromos are currently employed with the federal government and the two federally administered cities of Addis Ababa and Dire Dawa, where Amharic is the official language. This is compounded by the fact that employment in the public sector requires party membership or a close connection to the ruling elite. Accordingly, young Oromos have high rates of unemployment.

By contrast, Tigrean leaders and their associates control the commanding heights of the economy. The top brass of the army and security establishments are highly unrepresentative of the country’s diversity. By some estimates, ethnic Tigreans, who make up only about 6 percent of the total population, hold more than 90 percent of all key positions in the military, intelligence and security services, as well as foreign affairs.

Oromos and other ethnic groups increasingly resent this deepening domination by a minority group. The Oromo people increasingly feel left out of key decisions affecting their future, and they lack appropriate avenues to air their grievances.

Practically all Oromo cultural and civil society organizations are banned. Too often, Oromo dissent is equated with terrorism or treason, so much so that being Oromo itself has become a crime. Such resentment and the regime’s refusal to address the Oromo people’s aspirations for freedom and meaningful autonomy, coupled with the centralization of power and lack of democratization, pose an existential threat to the Ethiopian state.

Ethiopia’s worsening instability will have serious consequences for the Horn of Africa region. And what the U.S. does during this crisis — particularly in Oromia — will have lasting implications.

For some context, in June 1991, the U.S. House Committee on Foreign Affairs held a hearing on Ethiopia. In his opening remarks, Rep. Toby Roth of Wisconsin noted, “it would be a tragedy if the defeat of Mengistu (Hailemariam) only leads to another repressive regime with a different name. The United States cannot let that happen.”

Responding to Roth’s concerns, then-Assistant Secretary of State for African Affairs Herman Cohen defended the United States’ support for the victorious rebels — Ethiopia’s current rulers — noting, they were saying all the right things and that the leaders had assured him of their commitment to democratization. Unfortunately, it did not take long for Rep. Roth’s premonitions to come true: Ethiopia’s former freedom fighters, with US backing, have now fully morphed into autocrats, hijacking the Ethiopian people’s long struggle for freedom, and undermining hopes for a broad-based and democratic political system.

Sadly, the U.S. continues to prioritize short-term security and counterterrorism objectives in its relationship with Ethiopia. Earlier this month, the U.S. Africa Command signed a new defense agreement with Ethiopia outlining broad ranging security cooperation, including equipment, military training, intelligence sharing, and logistics support for the Ethiopian Defense Forces — the very unit implicated in the killings and torture of peaceful protesters.

The U.S. government has enormous leverage with Ethiopian leaders. But the lack of a long-term, comprehensive policy that considers American strategic concerns, as well as the aspirations of the Ethiopian people, has meant that the significant U.S. foreign assistance to Ethiopia has had the effect of undermining U.S. credibility among ordinary Ethiopians and more importantly, isdirectly contributing to the country’s instability by propping up an unpopular regime.

Under the weight of Ethiopia’s autocracy, the space for political dissent has narrowed—leaving the door open for a perfect storm. The there is no accountability and rule of law in Ethiopia today. The law is an instrument of coercion and domination, a means to criminalize the legitimate activities and opinions of opposition parties, journalists, and human rights defenders. Even more worrisome, the regime incites and exploits divisions among ethnic and religious groups to preempt a united opposition to its increasingly dictatorial rule.

Young people in Ethiopia face three stark choices today: join the ruling party, flee the country or fight. A journey through the Sahara and across the Mediterranean Sea has proven treacherous. As more and more youth give up on peaceful struggle to untangle Ethiopia from the grip of authoritarianism, the country risks sliding into a Syria-like inferno—a prospect the U.S. should NEVER allow to materialize.

Oromos have always been a stabilizing force in this conflicted region but the ongoing heightened crackdown is now testing their long-held patience. Addressing the long-standing Oromo people’s quest to end their marginalization remains central to ensuring that Ethiopia’s simmering political and security tensions do not deteriorate into a sectarian conflict in an already volatile region. Ethiopia’s political problems will not be solved without properly addressing the Oromo question.

To remedy this difficult and complex situation, I make the following recommendations:

Thank you all again for your time today.