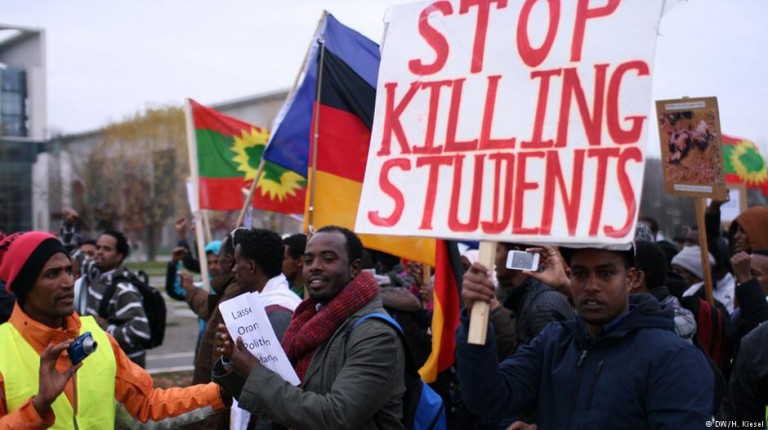 (OPride) — Ethiopian security forces have repeatedly used excessive and unnecessary lethal force, including live ammunitions, for crowd control against peaceful protesters in the Oromia region, killing more than 400 people during months of popular and widespread protests that began in November 2015, Human Rights Watch (HRW) said in a new report on Thursday.

“Ethiopian security forces have fired on and killed hundreds of students, farmers, and other peaceful protesters with blatant disregard for human life,” said Leslie Lefkow, deputy Africa director at HRW.

The 61-page report, “‘Such a Brutal Crackdown’: Killings and Arrests in Response to Ethiopia’s Oromo Protests,” is based on interviews conducted with more than 125 individuals from 62 locations across Oromia from November 2015 to May 2016. “Interviewees included victims, witnesses and government officials in Oromia, media professionals, and former government and intelligence officials,” the report said. It details serious human rights violations and the systemic targeting of “the cream of the crop” — Oromo leaders, teachers, musicians, health workers, members of Oromo cultural clubs at schools and the best students in their classes.

Tens of thousands of Oromo activists, who were swept up during the unprecedented crackdown across Oromia, remain incarcerated without any charge at various detention centers around the country, including at military camps where rape and torture is said to be commonplace.

A handful of prominent political prisoners are going through a highly orchestrated and politicized trial proceedings at the country’s kangaroo courts. They have been charged under Ethiopia’s sweeping anti-terrorism law, while 20 students who were arrested in March for protesting in front of the US embassy in Addis Ababa were charged with lesser criminal offenses, according to the HRW report.

A tale of two reports

The HRW is calling on Ethiopia to “immediately free those wrongfully detained, support a credible, independent investigation, and hold security force members accountable for abuses.”

But, based on past experiences, such an investigation is highly unlikely. And that it is rather unrealistic to even expect Ethiopian rulers to engage in any fair and credible fact-finding.

The HRW report comes only days after the country’s “human rights commission” issued its final report on the situation in Oromia. In it, the state-affiliated commission downplays the extent of the conflict in Oromia and the causalities during several months of protests.

The official report, which was presented to and approved by the country’s rubber stamp single party parliament last week, even appears to deemphasize previous public statements by Ethiopian authorities, including the admission of guilt and apology by the prime minister Hailemariam Desalegn. It also justifies the use of force as “proportionate” and necessary to maintain the constitutional order. It puts the death toll at 173, including 28 members of the security forces, which it alleged were killed by the protesters.

At the end of its scathing report, the HRW lists about 314 names of those it said were killed by Ethiopian police and military forces. Oromo activists maintain a similar list, which at the time of writing, had 525 names and some photos of those killed during the still-ongoing Oromo protests.

The latest bout of protests were triggered by opposition to a government master plan that sought to expand the capital, Addis Ababa’s jurisdiction. Authorities last January pledged to “fully stop” the master plan but the protesters grievances have by then widened, as HRW noted, in part fueled by the brutality of the government crackdown.

“The protests also draw on decades of deeply held grievances within Oromo communities who feel they have been politically, economically and culturally marginalized by successive governments in Ethiopia,” the HRW noted.

Street protests have largely subsided but the security situation in Oromia remains tense and residents report ongoing arrests and harassment, as well as the presence of heavily armed military forces across the state.

The most telling part of the HRW report is the witness accounts, which were hitherto unavailable due to the restrictions on free speech and the lack of independent reporting on the ground. We have collected some of those here for easier access, as follows:

Yoseph, 52, from the Wollega zone, said: “I’ve lived here for my whole life, and I’ve never seen such a brutal crackdown. There are regular arrests and killings of our people, but every family here has had at least one child arrested.”

Wako, a 17-year-old student from West Shewa, said the response of the security forces changed markedly between two different protests in November:

During the first protest in mid-November, the Oromia police tried to convince us to go home. We refused so they broke it up with teargas and arrested many. Several days later we had another protest. This time the federal police had arrived. They fired many bullets into the air. When people did not disperse they fired teargas, and then in the confusion we heard the sounds of more bullets and students started falling next to me. My friend was killed by a bullet. He wasn’t targeted, they were just shooting randomly into the crowd.

“We were walking, demanding an end to the use of force and against the Master plan, then we saw the police. Minutes later there was smoke and it started burning our eyes and throats, then I remember being hit with a stick on my arms. Then I ran away. I went to the clinic the next day because they had broken my wrist.

Another student described the scene in Bedeno in East Hararghe zone in January, 2016, when security forces shot at least six students:

“My friend was shot in the stomach at the protest, his intestines were coming out, he said, “Please brother, tie my wound with your clothes.” I was scared, I froze and then tried to do that but I was grabbed and arrested by the federal police. Jamal died. They arrested me and took me to Bedeno police station.”

This was our third day of protesting. We knew the pattern. During the protest they would arrest who they could, but at night they would go door-to-door arresting students. If they couldn’t arrest those they wanted, they would arrest our parents. So we would all run to the rural areas and hide and just hope that when we came back our parents had not been arrested.

Jamal, an 18-year-old student from Adaba woreda in West Arsi zone, described being searched every morning at school for one week by the military. “They were searching for those that had Oromo music on their phones,” he said. “They arrested six people that had protests songs on their phone, songs by Caalaa Bultum, Ebisa Adunya, and Kadir Martu.

The mother of a missing 15-year-old student from the Borana zone said:

“He went to school in the morning. They had planned to protest. He told me he wouldn’t but I knew he would. That was the last time I heard from him. …Others told me he was arrested by federal security. But I went to the police station, to the local security office and no one had any information about him. I talked to some boys who were arrested at the protest and had been taken to the local police station, and they said they had heard he was taken to a military camp somewhere but they weren’t sure.”

Meti, a woman in her 20s, was arrested in late December for selling traditional Oromo clothes the day after a protest in East Wollega:

I was arrested and spent one week at the police station. Each night they pulled me out and beat me with a dry stick and rubber whip. Then I was taken to [location withheld]. I was kept in solitary confinement. On three separate occasions I was forced to take off my clothes and parade in front of the officers while I was questioned about my link with the OLF. They threatened to kill me unless I confessed to being involved with organizing the protests. I was asked why I was selling Oromo clothes and jewelry. They told me my business symbolizes pride in being Oromo and that is why people are coming out to protest. At first I was by myself in a dark cell, but then I was with all the other girls that had been arrested during the protest.

A partner in good standing

Despite its widely documented human rights abuses, Ethiopia remains a darling of the West and a global partner in good standing. It continues to receive multilateral and bilateral aid, among others, from United States and the European Union. Even the United Nations Human Rights Council, which has been amply critical of neighboring Eritrea have remained largely silent on the Oromo protests and the general deterioration of human rights in Ethiopia — perhaps a revealing testament to its own fickleness and politicized nature,  and the Ethiopian rulers’ shrewd diplomatic maneuvering skills. Ethiopia is angling for a non-permanent seat on the security council and its foreign minister is running as Africa’s more or less unanimous candidate to lead the World Health Organization.

“Ethiopia’s foreign supporters have largely remained silent during the government’s bloody crackdown in Oromia,” Lefkow said. “Countries promoting Ethiopia’s development should press for progress in all areas, notably the right to free speech, and justice for victims of abuse.”

It remains to be seen if such a pressure is forthcoming any time soon, especially consider the fact that the street confrontations have been brutally suppressed — for now.

An Ethiopian intelligence official confirmed to Human Rights Watch that targeting public figures was deliberate government policy. He said, “It is important to target respected Oromos. Anyone that has the ability to mobilize Oromos will be targeted, from the highest level like Bekele, to teachers, respected students, and Oromo artists.”

When the protests were happening in other parts of our zone, we were told to round up all those that might want to protest – our list included the best students, those who were involved in any language or cultural clubs, teachers who had not shown their loyalty to government, several well-known business owners, and past troublemakers. We were to stop this protest but also to prevent future problems by arresting those who were not close to us government. They were all arrested or ran away, but the protests happened anyway. I was then blamed, and heard I was to be arrested so I ran away too.