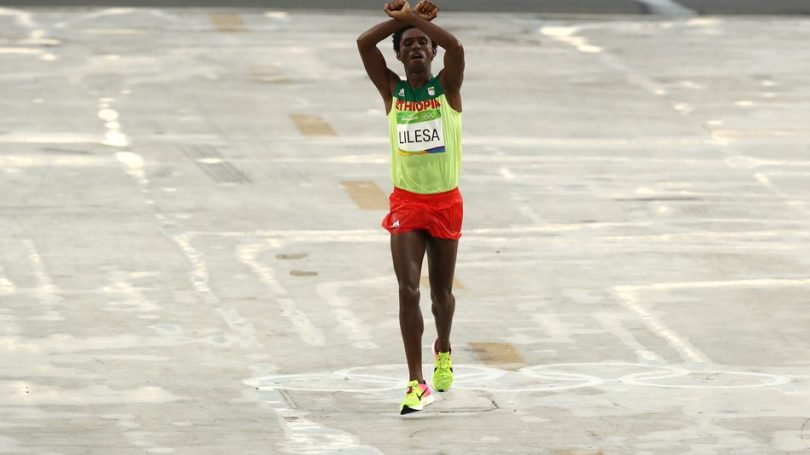 (OPride) — Ethiopia’s dismal showing at the 2016 Rio Olympics began with the Horn of Africa country earning the honor of being billed as the “worst dressed” participation in the opening ceremony. Ethiopia then briefly captured the headlines with the swimming debut of ‘Robel the Whale.’ This display of nepotism — the country’s flag bearer at the opening ceremony being the son of Ethiopian Swimming Federation president — ended with him coming in last in the men’s 100-meter freestyle at the Rio Games earning global notoriety for his nonathletic beer belly. There were a few other bright spots like Almaz Ayana Eba’s victory in the Women’s 10,000 meters race in which she demolished a 23-year-old world record.

But the Ethiopian side’s summer in Rio came to a spectacular end with a thriller on Sunday, August 21, when an Oromo athlete and marathoner, Feyisa Lilesa won the silver medal. If it ended there, it will still go down as a great triumph of human endurance and he would go down as one among Ethiopia’s many greats on track and field. But Lelisa did not stop there: as he approached the finish line, the 26-year-old runner crossed his wrists over his head, forming an X, a popular symbol of protest by the Oromo youth in Ethiopia. Lilesa will be remembered for decades to come — not necessarily for his second place finish which in and of itself is a marvelous achievement — but for the way he crossed the finish line.

By so doing, Lilesa faced potential loss of his medal and a grave danger to his life and his family. But he gave no hoot, repeatedly flashing the protests sign and courageously explaining to foreign reporters at the post-victory press conference what it’s like to be Oromo in Ethiopia in 2016.

“In the last nine months, more than 1,000 people died,” Lilesa, told the SI’s Chris Chavez outside of the press conference. “And others charged with treason. It’s a very dangerous situation among Oromo people in Ethiopia.”

Chavez was one of the first western journalists to recognize the significance of Lilesa’s gesture and live-tweet the athlete’s post-race comments. Response to Lilesa’s spectacular display of courage was immediate. The Washington Post’s Africa Bureau chief, Kevin Sieff, called it “the bravest act at the 2016 Olympics.” BBC journalist Piers Edwards dubbed Lilesa’s display of courage an “extraordinary moment.” They were right.

Ethiopia and Oromo social media was lit up immediately. For a great people who have, after being rendered invisible for centuries, yearned to be heard and to be visible again, who have been forcibly silenced for a quarter of a century, to say nothing of the Oromo people’s longstanding economic and political marginalization, this was an extraordinary display of the indomitable human spirit and victory of the undying human thirst for liberty and distaste for tyranny. To witness one of their own using the biggest stage of his life to make a bold and unmistakable statement, is to be inspired, and empowered. His courage will embolden many an Oromo athlete to break their long-held silence over their own treatment by corrupt Ethiopian Athletics Federation (EAF) officials and the Oromo people’s second class existence in Ethiopia. Oromo athletes are celebrated when they win medals for Ethiopia but never for their heritage. Their glorious victories forever overshadowing the oppression of the Oromo people.

Ethiopia’s glory as the home of the greatest track and field competitors on the world stage was won on the back of the Oromo athletes. From Abebe Bikila to Fatuma Roba and Darartu Tulu, from the Dibaba sisters to Almaz Ayana Eba and Feyisa Lilesa, the most decorated of Ethiopian runners are and have been ethnic Oromos. But their much-celebrated victories did little to improve the lot of their compatriots, who despite their numerical majority, remain the most oppressed and marginalized group in Ethiopia.

The athletes themselves were often abused and exploited. A few years ago, a group of young Ethiopian runners in New York told OPride that EAF officials did not even permit them to speak in their native Oromo language. They were forced to learn Amharic, the language of power in Ethiopia. In exit media interviews, Oromo athletes are often heard struggling to express themselves in broken Amharic, which is then translated to English by the federation staff and their Ethiopian handlers, who themselves spoke in broken English. The rampant corruption, discrimination and nepotism inside EAF is such that athletes like Lilesa who dare speak out, refuse to join the ruling party and show any sign of dissent or opposition to the ruling party are often disqualified on technical grounds. And as a result Oromo athletes often put up with the federation’s implicit and explicit abuses for the alternative is non-participation in international sporting arena. A handful of Oromo athletes have quit in protest and now live in exile or run for foreign countries.

Lilesa’s blossoming career with the EAF may have ended with that simple show of solidarity with his countrymen. But he joins a great company of brave athletes who used the Olympics stage to make a stand against injustice and status quo. In fact, only a few elite athletes have ever put everything on the line the way Lilesa did to speak their conscience and bring political events in their home countries to the Olympics stage.

When Lilesa’s story is written, his name will be mentioned alongside two African-American athletes —Tommie Smith and John Carlos — who made history by raising the black power salute during the US national anthem at the 1968 Olympics in Mexico City. It became a defining moment in the history of the Olympics, an inspiration to all oppressed nations and people around the world.

Lilesa’s defiant protest may not generate similar attention only because the international media pays little to no attention to Africans and African stories. But for millions of Ethiopians, particularly the Oromo, the symbolic gesture offers hope for a better future. It will serve as yet another inspiration to the 9-month-old Oromo protests, which has already shaken the foundations of the Ethiopian state. Through their uncommon courage, the youth, both on the streets and alleys of their homeland and the mother of all global forums, the Olympic, have made courage itself so common.

The Oromo protests began in November 2015 in opposition, at the time, to the so-called Addis Ababa master plan, a development scheme that sought to expand the Ethiopian capital’s jurisdiction into the Oromia state. The Ethiopian authorities responded by opening fire on peaceful protesters. So far, more than 600 people have been killed by security forces. Tens of hundreds have been arrested. The deepening crackdown galvanized an entire generation of Oromo youth — the Qubee generation —  those who grew up under the tight grip of the ruling Ethiopian People’s Revolutionary Democratic Front, or EPRDF, now in power for 25 years – Lilesa’s entire lifetime. The growing repression tested the patience of a giant nation and has now become an unstoppable volcano that’s is showing up at unlikely places like Rio. If there’s still any doubt as to whether the budding revolution in Ethiopia has reached a point of no return, Lilesa’s protest in Rio is a sign that nothing can stop an idea whose time has come.

Lilesa’s is a brave, defiant and revolutionary act — one for the ages.

Here is how social media and some in the international press reacted to Lilesa’s historic moment in Rio.