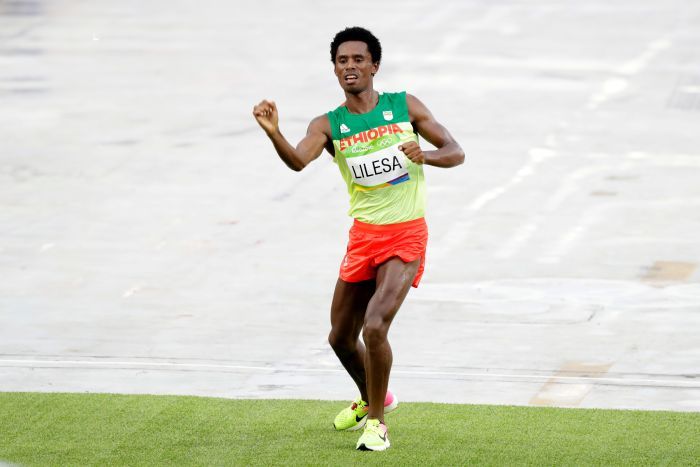 (OPride) — Athlete Feyisa Lilesa’s brave transmission of the Oromo protests movement symbol to a global audience watching the Rio Olympics on August 21 delivered a stinging jab into the face of the century old image of a “proper and well behaved” Oromo.

The entire world’s cameras, and a plethora journalists hounded the young athlete, mystified by what some called the “X symbol” Feyisa made by repeatedly crossing his arms just meters from the finish line in Rio.

They were treated to the truth. The cold painful truth that oppressive imperial Ethiopia and her hardcore right-wing adherents would have wanted to see shoved under the royal rug decades ago: THE OROMO PEOPLE EXIST. The Oromo people, with their culture, language and customs are alive and kicking. And above all, they are here to stay.

“Children should be seen and not heard!” This belief is the backbone of your traditional parenting guide in some conservative cultures such as Ethiopia. In order to maintain a sense of order in the household, the rowdy and playful bunch were to politely smile, speak only when greeted and behave while guests are around to promote the stereotypical image of a healthy, perfect family breeding absolutely flawless angels.

In many ways, for far too long, the place of the Oromo in the Ethiopian family almost paralleled that of countless children raised by strict parents.

The Oromo have always been a major part of the Ethiopia that was formed in the imperial era of conquest. The largest ethnic group in the country can find its descendants living all across the country, and countless more are Oromo through their lineage. The Afaan Oromo language is said to be the fourth most spoken language on the entire African continent, and something like half of Ethiopia’s 90 million people are native speakers of the language.

Despite the impossible to miss hint of Oromo in everything and anything Ethiopia related, the Oromo have traditionally been forbidden from even recognizing themselves as Oromo. Seen and not heard, systematic oppression of the Oromo by Ethiopian governments from the day the union saw the light, saw a nearly successful attempt to culturally wipe the Oromo off the map. In an attempt to exclusively promote the culture of the Abyssinian highlanders of whom the leaders of Ethiopia’s 18th century conquering warlords belonged to, the Oromo were forced by their own national institutions to submit and surrender what made them unique in terms of language, culture and identity.

Despite the grievances and obvious resistance to the rules they were being subjugated to in what was an abusive household to say the least, the Oromo were indeed systematically rendered children, “seen and not heard.” Ethnic Oromos were muzzled from speaking on behalf of their kin, their kind. Just as how rebellious children who violated household rules might be harshly disciplined, Oromo voices of resistance to the assimilation process saw punishment meted out in the form of state sanctioned killings and imprisonment.

Being Oromo in Ethiopia

In imperial Ethiopia, most Oromo Ethiopians were poor farmers who lived toiling away on land belonging greedy members of imperial Ethiopia’s elitist clique, mostly governors or relatives and acquaintances of the royal family. Those who managed to defeat the odds and fend for themselves in what was an extremely hostile environment for a self conscious Oromo, would be able to make a living, while attempting to mask his or her ancestry.

Oromos were looked down upon, ridiculed and seen as second class citizens. For an Oromo to garner respect and appreciation in any domain, that individual would have had to prove him or herself to be a loyal servant of what was considered Ethiopianism, a firm believer of imperial ideologies, thus mirroring the only acceptable and tolerated image of an Ethiopian. Anything less would be blasphemous, equating treason and thus revoke all permits to function as a productive human being in society.

This is why throughout “mainstream” Ethiopian history, Oromos have been recognized for their achievements, but they have almost never been recognized as Oromos. Imperial Ethiopia’s worst nightmare was the world acknowledging the existence of an Ethiopian ethnic group whose customs and languages weren’t similar to those being sold to the world as the only ones in the country that mattered.

So to those who may say, no, Feyisa wasn’t the first Oromo athlete to run at the Olympic Games for Ethiopia. He is however, among a generation of them who have done so without being forced to conform to and live via an extremely narrow depiction of the term “Ethiopian.” Feyisa was free from those shackles, cherishing his Oromo roots, attending the annual Oromo cultural Ireechaa festivals, showing up in traditional Oromo garments. A product of the generation of self-conscious Ethiopians born after the country’s transition to federalism.

Defiantly proud of their identity, Feyisa’s generation had the privilege of being raised Oromo while holding their head high with pride. His situation is a far cry from what Oromo athletes of Ethiopia’s pre-federalism era had to face. In those days, the Oromo identity was shunned and looked upon with disgust by a society high on the fumes of religious and nationalist zealot brainwashing. One’s Oromo identity was something to be ashamed of despite the innumerable contributions to the country’s development in war and peacetime by Ethiopians of ethnic Oromo ancestry.

Rhetorically “smiling,” acting as a proper “Ethiopian,” seen and not heard, an Oromo could even reach the upper echelons of power. But a rebellious child, refusing to submit to the demands of extremely abusive parents and voicing his/her discontent would put one’s life at risk. The many principled Oromo farmers and scholars who refused to accept this fate of non existence, this sort of “limbo” on their own land, fought fiercely against this narrow minded narrative and inspired a nationwide, decades-long resistance that has revolutionized the way the country is ruled.

Today, being Oromo is no longer something to be ashamed of and the Oromo culture and language thrive. The existence of a unique Oromo identity is now a widely accepted and recognizedreality in Ethiopia. However, a century of state sponsored fear mongering surrounding all that is Oromo has not disappeared and unfortunately, its affects are still all too noticeable among Ethiopians living at home and abroad.

Due to the widely propagated fear that the common Oromo was hell bent on seeing the country be dismantled and break into segments, associations and gatherings in the name of Oromos were and are still looked at with fear and repulsion.

In a manner all too similar of how opponents of the African American Black Lives Matter retort with statements like “all lives matter!” many Ethiopians, especially those ranging from people in their forties to octogenarians, will strongly protest anything titled or spoken in the name of Oromos, referring to any such thing as divisive, anti Ethiopian, racist, among other demeaning terms. Their stark refusal to realize that the brand “Ethiopian” has only all too often completely cloaked anything uniquely belonging to the Oromo has forever served to divide Ethiopians and is still a source for great misunderstanding among Ethiopians, especially those living in diaspora communities.

However times have changed, the once fearful children of the household have given way for an extremely self-aware, self-conscious generation of unrelenting unapologetic Oromos. Despite the electric shocks to the psyche of previous generations of their much more narrow minded non-Oromo countrymen, unable to process how these once “inferior” beings could be at the reins of every quest for justice and equality in Ethiopia, today’s generation of Oromos are proof that a century’s worth of attempts at annihilating any sense of pride the Oromo have in themselves, has backfired on a massive scale.

The current regime cohorts wouldn’t object to the above mentioned facts. But Feyisa’s being spawn from a generation of no nonsense vibrant youth means that despite the advances, he couldn’t accept the current government’s displacement of farmers, incarcerating and killing of unarmed Oromo and Amhara protesters. He spotted the chance to highlight the daily plight his people across Ethiopia have been facing for nine months now and grabbed it with both hands. His actions just prior to crossing the marathon finish line at the Rio de Janeiro games have forever endeared him to all Ethiopians supporting the fight against oppression, censorship and all forms of state sponsored injustice in Ethiopia.

Ethiopians will never miss an opportunity to promote the beautiful aspects of Ethiopia, as outsiders are genuinely intrigued by all things Ethiopian. The food, the links between Ethiopia and all three Abrahamic faiths, the attractive looking women, there’s a lot that pushes foreigners to acquaint themselves with the country. Outsiders will inquire about what they know or have seen, hence our having to repeatedly explain the links between our country and Bob Marley for instance. Now those outsiders are asking questions they weren’t supposed to be asking. “Who are the Oromo? Are there a lot of Oromos in Ethiopia? Why is a world class athlete afraid to return to his country? Why is the Ethiopian government killing its people? What does the crossed arms gesture mean?”

It has been a painstakingly awkward couple of days for all those who experience the angst of brain freeze when the Oromo question is brought up.

You cannot accuse every curious athletics fans across the world who were watching the Olympic marathon of being a traitor, a separatist, a “banda.” They’ve had to chew up their pride, take a deep breath and realize everything they had grown up believing in has dissipated into thin air. Feyisa Lilesa’s shock therapy may have sent many into a period of self-examination.

Ethiopians, especially those still adhering to outdated primitive ideologies of yesteryear, must face the music and quickly adjust to the fact that there’s an Ethiopia living beyond the red line confines drawn up by their semi-deity monarchs that kept millions of Oromos silenced and shamed. Thanks to the likes of Feyisa, hundreds across the country who have paid the ultimate price, thousands more who have sacrificed and continue to sacrifice and a gesture that has united them all, the world has recognized the unique sounds of the Oromo.

If not for common decency or humanity, for the sake of the country we claim to love with a zealous fervour, it would be best for Ethiopians to follow suit and get on this now global bandwagon.

The Oromo will be seen and heard.

My name is Zecharias Zelalem.