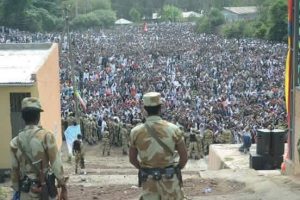 What: Irreecha Massacre, in which at least 678 festival goers were killed and many more injured, according to the opposition party Oromo Federalist Congress (OFC).

Where: Bishoftu, a town 25 miles southeast of the capital Addis Ababa, Ethiopia.

Why: An estimated two million people from across Oromia came to Bishoftu to celebrate Irreecha, the Oromo thanksgiving festival. Irreecha is the largest cultural and spiritual celebrations in all of Africa. This year’s Irreecha took place in the backdrop of a heightened government crackdown on the Oromo protests, a now 11-month-old movement opposing the continued marginalization of Ethiopia’s largest ethnic group. The festive mood turned chaotic after Ethiopian security forces responded to peaceful protests by firing teargas and live bullets at a large crowd assembled in a very tight space surrounded by a lake and cliffs.

As much as a celebration and marker of seasonal changes, for many Oromo youth, Irreecha has long been a site of resistance and reaffirmation of identity.

The Irreecha celebration is full of melodious singing and vibrant dancing. For the Oromo, singing has always been a way to express both happiness and celebration, as well as, air grievances and display resistance. Every year, the youth sing resistance songs, denounce ongoing human rights violations and demand the respect of their rights.

As soon as people began to file into the Hora, the lake shore where the Irreecha rituals are performed, the youth can be heard singing Oromo revolutionary songs. But tensions began to grow once representatives of the ruling party took the stage, which the government has often sought to control and manage instead of letting the traditional Oromo leaders – known as the Abba Gadaas – oversee the event.

After a while and as the show of resistance grew stronger and bolder, the current Abba Gadaa Bayana Sanbato was finally brought to the stage. It’s time for the blessings and speeches by government officials to begin. And the crowd’s chants were less boisterous. It’s at this point that those managing the stage began putting up the flag of the ruling Ethiopian People’s Revolutionary Democratic Front (EPRDF).

This was unique and surprising as the regional tourism bureau itself has pledged not to politicize this sacred cultural event by bringing party emblems. The hoisting of more flags drew huge uproar from the crowd, which by then was pushing closer to the stage. 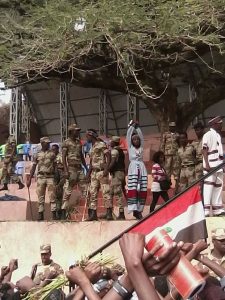 When the organizers seemed unmoved, a fearless and defiant young man jumped on the stage, grabbed the microphone and began leading the crowd in chants, “down, down with Wayane.” “Wayane” is the moniker used to describe the Tigrayan People’s Liberation Front (TPLF), the kingmakers in the loose EPRDF coalition.

Helicopters flew overhead all afternoon in an effort to intimidate the congregants. But they hovered ever more closer and began dropping what officials said were leaflets, whose contents remain a mystery so far.

The trigger-happy security forces responded to the thunderous show of opposition the only way they have been trained to control crowd: First by firing teargas and then live ammunition at the unarmed public. The helicopters joined the fray by raining teargas and what some say bullets on the fleeing crowd. Authorities say no one died of gunshots. But it must be very clear that the chaos and resulting stampede was provoked by the security forces.

The Ethiopian government and its officials are solely responsible for this mayhem.

The protesters remained peaceful all morning. And they peacefully demanded a) the current Abba Gadaa be brought to the stage to preside over the formal possessions b) the organizers stop politicizing a cultural and spiritual event by hoisting party flags c) the officials hear and respond to deepening public grievances.

All of this could have been handled peacefully by allowing the Abba Gadaa to start the program or by vacating the stage and letting the people to perform their own cultural celebrations.

The government in Ethiopia wants to control and organize all aspects of life. Irreecha should have never been a venue for political statements. It should never have been organized or managed by the government.

The Irreecha massacre is the clearest example yet of the total rejection of the ruling party by the Oromo public. The mass killings have hardened an already aggrieved nation. This day will be remembered by the Oromo along such traumatic battles as the Aanolee, Gulale and Chalanqo.

Monuments will be built on the sacred grounds of Arsadi. And when the history of this day, the darkest hour in contemporary Oromo life, is written, it will show that not a stampede but EPRDF is the sole culprit. The public anger is likely to metastasize in the coming days. Funerals are being held across the state. People are mourning. Trying to absorb and make sense of this unprecedented tragedy. Oromia is already burning in various locales. This is likely to continue. People are saying they will go on the streets to meet either their death or freedom itself. The immediate goal is to uproot all symbols of regime at the local level.  In meetings and at funerals across Oromia, the local, unelected Afaan Oromo representatives of the regime have been warned. The people’s tolerance for the OPDO, the Oromo associates in EPRDF, is running out. As the regime loses control of some localities, the local government organs have been urged to be on the right side of history, or at least be with the people.

Who are the Oromo?

The Oromo are the largest ethnic group in Ethiopia whose population constitutes over 40 percent of the country’s 100 million people. The Oromo are a harmonious people with a rich culture and heritage. They have been oppressed by consecutive Ethiopian regimes for over the last century.

The Oromo nation shares a common language, history, and descent. Oromos are followers of three religions: Waaqeffannaa, Christianity, and Islam. During their long history, the Oromo developed their own cultural, social and political system known as the Gadaa system long before Western countries created their democracies. The Gadaa system is a uniquely democratic political and social institution that governed the life of every individual in the society from birth to death. Dubbed Ethiopia’s breadbasket, Oromia, the Oromo homeland, is one of the richest in the Horn of Africa region.

In spite of all these assets, the Oromo people have endured a century of ruthless oppression, subjugation, and exploitation by successive Ethiopian rulers. The Oromo have long complained about and resisted continued political, social and economic marginalization. The latest protests are a culmination of these age old grievances by the Oromo people.The long unaddressed Oromo question – a popular demand for freedom, equality and genuine self-rule –  remains the most existential threat to Ethiopia’s continuity as nation state.

Irreecha is a thanksgiving celebration that takes place during the spring season (when the rainy season transitions to the sunny season). Oromos gather on the banks of Hora Arsadi, a lake located in the city of Bishoftu.

In the past, the rainy season brought with it division between families. As roads became too muddy to travel on and rivers too full to cross, people would go months without being able to visit relatives. The arrival of spring signaled reunion and Irreecha was an expression of gratitude to Waaqa (God).

Oromos of all ages and faiths from all regions travel hundreds of kilometers to attend this festival.

The first surge of protests began in April 2014 after the Ethiopian government announced plans to expand the capital city, Addis Ababa, to 25 times its current size, into the country’s Oromia state. The plan would seize land (over 2 million hectares of land) from farmers to sell to investors and would evict and displace from 3 to 5 million Oromo people. The rallies began with primary and secondary school students and quickly spread to the general population. Security forces killed an estimated 75 people across Oromia, most notably in the restive town of Ambo, located 80 miles west of Addis Ababa.

Shortly after the protests began, Ethiopia held it’s highly criticized elections in May 2015, where EPRDF claimed all 547 parliamentary seats and 100 percent control of the regional legislatures, which only added to frustration of the masses.

Due to the stringent stifling of media and free speech by the Ethiopian government, citizen journalists in the country leveraged smartphones and social media to communicate with the outside world. They documented and shared harrowing images and videos of the being atrocities committed by the Ethiopian security forces.

When the government, which already blocks diaspora-based news sites, began cutting off social media platforms and the internet, local activists found ways to circumvent the censorship using proxies, personal VPNs and other circumvention tools to send photos and videos of the ruthless crackdowns to the media and the Oromo diaspora. The #OromoProtests hashtag emerged at this time and became the official tagline and resource for the movement.

The most recent round of protests began in November 2015 in the town of Ginchi, in West Shewa zone of Oromia, and has since spread across the entire state of Oromia. According to a report by Human Rights Watch, Ethiopian security forces have used “excessive and lethal force against largely peaceful protests”. 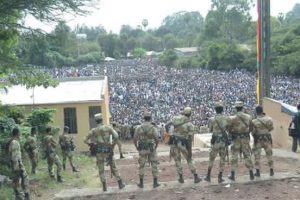 Protesters have stretched the security forces thin by employing elaborate nonviolent resistance tactics, including marches, road blockades, sit-ins, food boycotts, and the now popular gesture of Oromo resistance, in which protesters cross both arms over their heads to form an “X”. Even though Ethiopia’s constitution protects the right to assemble and peacefully protest, demonstrators have faced a ruthless crackdown from Ethiopian Special Forces, known as the Agazi Commandos, deployed across the state of Oromia to quell the protests. Victims include children as young as 8 years old, a pregnant woman, a grieving mother, college students and a 70-year-old elderly. The protests have been further fueled by the detention of all Oromo political leaders in the country, the most high-profile of which include Bekele Gerba and Dejene Tafa of OFC.

Human Rights Watch estimates more than 500 protesters were killed, largely youth under the age of 18. Activists and the Oromo opposition say the death toll from the 11-month-long protests is at least three times higher that the HRW estimate.

The protests have now spread to the Amhara region, with some 100 people killed during demonstrations in Amhara and Oromia in August, according to Amnesty International. The two groups together make up more than two-thirds of Ethiopia’s population. Protesters in Oromia and Amhara have expressed solidarity and are vowing to change the current repressive system in Ethiopia.

What are some of the demands of Oromo protesters?

Keywords to search in Google for more context and related stories: