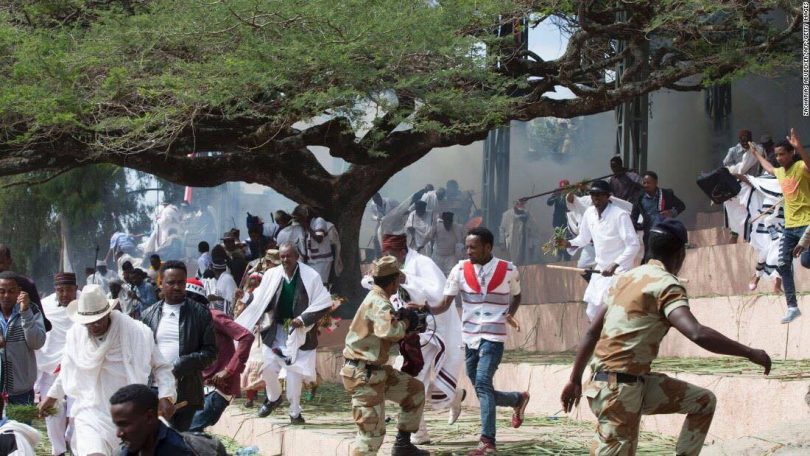 (OPride) — The Irreecha massacre on October 2 in Bishoftu, a town 25 miles Southeast of Ethiopia’s capital, Addis Ababa, where an estimated 678 people were killed, marks a major turning point for the nearly year-long Oromo protests.

The protests in Ethiopia have exposed the government’s brutality and repression through videos and graphic images captured by citizen journalists.

The public anger over the tragic end of Irreecha celebration has led to significant changes in the tactics employed by the protesters. In response, the regime in Addis Ababa has declared a six-month-long state of emergency.

In West Arsi, which has emerged as the epicenter of the post-Irreecha resistance, protesters have responded by blocking roads, burning government vehicles and uprooting the local government establishments. In some areas, the protesters are engaging in self-defense against the Ethiopian security forces. For example, gunfire exchanges between the local people and the Agazi force have been reported in the flashpoint town of Ajje and other towns across West Arsi.

Security forces killed at least 200 people in Ajje, Shala, Arsi Nagele, Kofale, Asasa, Shirka, Dodola and Heraro towns in the past week alone. Countless others have been wounded, many still suffering without any medical attention.

Telephone and internet services have been cut to prevent people from sharing information. Locals say most municipalities in West Arsi now look like ghost towns. In some cases, people were not even able to recover and bury the body of their deceased relatives.

People are under a literal house arrest. Anyone found outside especially after dark could be killed. Instances of rape have been reported. Random beatings and disappearances have become extremely dangerous. Businesses are on standstill. Movements are severely restricted, so much so that people can’t even venture outside to access basic needs such as food and water. Clinics and pharmacies are not operational. Local government institutions have either been burned to the ground by angry protesters or closed down as the state of emergency came into effect.

The events unfolding across Oromia today, especially in West Arsi, are unparalleled. In March, when clashes erupted between protesters and the Agazi force in Ajje and surrounding West Arsi towns, many innocent lives were lost but it went largely unreported. Ethiopia’s Minister of Communication, Getachew Reda, likened the protesters in West Arsi to  “aganent” meaning evil and hurled many demeaning insults at them.

Prime Minister Hailemariam Desalegn doubled down on Reda’s demonizing comments, pledging to take ‘unmerciful” actions against the protesters. This was followed by decision to put the state of Oromia under a military command post.  In West Arsi, for example, the number of federal forces roaming the streets quadrupled within days. The militarization also led to mass arrests and a general climate of insecurity.

The latest intensification of the Oromo protests show that the heavy-handed crackdown is not working. It also indicates a total rejection of the minority government in Addis Ababa and the people’s unwillingness to be ruled by few Tigrayan elites.

The unmerciful killings in Oromia are putting the public on the defensive. In parts of West Arsi and Shewa, for example, protesters have disarmed the local militia and police officers to use their guns to defend themselves. In other instances, Oromo members of the police and army have joined the protests against the regime. The growing consensus among the Oromo is to fight all the way.

The need for a stronger and unified resistance against brutal government onslaught is being openly discussed at burial sites and social gatherings. This underscores the shift from a protest movement toward a full-on Oromo revolution.

Oromia is often hailed as Ethiopia’s breadbasket. It is true. And the conflict affected areas of West Arsi and Bale are vital for the country’s food security. Some of the most arable and fertile lands are located in these regions. The area is known to produce wheat, barley, sorghum and teff, among other grains that feed millions of Ethiopians.

It is not an accident that the region is home to several government owned mechanized farms set up by Mengistu Hailemariam’s communist regime. These include large farms in Serofta, Adele, Ardayta, Hunxe, Heraro and Agarafa. Some of these large-scale farms are now run by foreign investors and remain of great importance to the country’s economic security.

It is a harvest season in Ethiopia. However, the government’s insistence on responding to popular public grievances only via more repression is likely to fuel more instability. This means much of the produce may not be harvested in time, thus creating a possibility of food shortage.

Furthermore, if road blockages or the digging of trenches to forestall the movement of security forces continue to intensify, the government will face huge logistical problems in transporting food and military equipment across the region.

Local investors and farmers need to harvest and store the food. But that is only possible in an environment that is politically  stable. At the moment, there is no guarantee for public safety let alone for harvesting.

The official declaration of the state of emergency is likely to cause even more resentment. It is only a matter of time for the besieged masses to transition from self-defense to retaliatory hit and run  attacks, setting the stage for a full scale war. If this scenario unfolds, Ethiopia will soon make global headlines for a civil war and severe food shortage.

Massive starvation and a popular and armed Oromo resistance movement will create panic throughout the country. This will lead to urban protests, including in Addis Ababa, which so far remains relatively untouched.

At the end of the day, food rules humanity. Historically, the late  Emperor Haile Selassie was overthrown in part because of food shortage and a famine that formed the basis for the revolution.

The Oromo must fully utilize its enormous economic, demographic and political advantage to advance the struggle for freedom and equality in Ethiopia.The regime in Addis Ababa is not willing to face the reality and meet the protesters demands. It continues to massacre and imprison innocent people en mass.

Despite the enormous loss of life and blatant human rights violations, the International community has done very little to condemn Ethiopian authorities beyond occasional statements of concern.

The peaceful protest in Ethiopia has reached its limit and the public have come to a consensus on the need for unity in and outside of the country. That includes reaching across the aisle and building real and lasting alliances with all oppressed people in Ethiopia.

Whether the Oromo continues to protest peacefully in the presence of gun toting security forces or engage in an armed self-defense remains to be seen. But the diaspora must answer the call for unity and come together. This is not a time to run alone or continue to engage in the usual endless bickering over strategy while our people are paying the ultimate price of life.