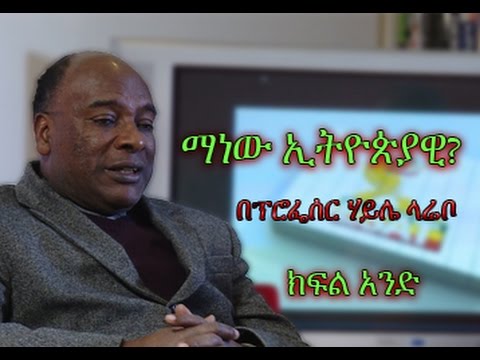 In a lengthy interview with Haile Larebo on January 10, which is being promoted by other Ethiopianist outlets as a “must watch,” the Ethiopian Satellite Television and Radio (ESAT) let it stand when Larebo referred to the Oromo as “Galla,” a derogatory term that is akin to the N-Word in the United States.  (The irony: Some right-wing Habesha elites still refer to Ethiopia’s Omotic tribes such as Larebo’s Kambata as “shanqila,” another disparaging and racist term akin to Nigger.)

Larebo also refers to the Oromo as nomadic pastoralists in Amharic, an expression that is often used by urban Amhara elites to demean those on the peripheries. He dismissed Oromo history as political fabrications created by the Germans, suggesting that the Oromo in Wollega has little in common with Oromos in Bale, Arusi, or Hararge.  The curious exchange quickly drew the ire of Oromo activists. It is now a subject of contentious debate on social media.

Who is Haile Larebo?
Larebo is an associate professor of history at Morehouse College in Atlanta, Georgia. He has long been a darling of right-wing Ethiopianists, who to this day, refuse to acknowledge the existence of a multi-ethnic, multilingual and rapidly changing country. Larebo, a member of the Kambata ethnic group, along with his many Ethiopianist fans, believes that the Oromo, Ethiopia’s single largest majority, are expats who are not indigenous to the Horn of Africa region. It is not a new thesis. It borrows from the blatantly anti-Oromo propaganda written by court historians in the 19th century.

Chief among this crowd is a certain Abba Bahrey, whom Larebo casually invokes in a recent interview with the Virginia-based opposition outlet ESAT. Like Larebo, ESAT is not new to accusations of anti-Oromo bias. Nearly seven years after its debut, the network struggles to earn the trust of the Oromo. That is despite starting an Afaan Oromo program last summer.

In sum, Larebo ranted throughout the entire segment, unchallenged, as he made outdated and outlandish claims to answer a rather intriguing question: “WHO ARE ETHIOPIANS’?”

Ethiopia is a land of endless contradictions and historical contests. It is remarkable that, even in 2017, the question of just “who is Ethiopian” remains debatable. With that (brief) context, here is how social media responded to Larebo’s falsification of historical records.

H.Larebo strikes me as someone who insists on speaking in Amharic, instead of his native tongue, when meeting childhood friends from Kambata