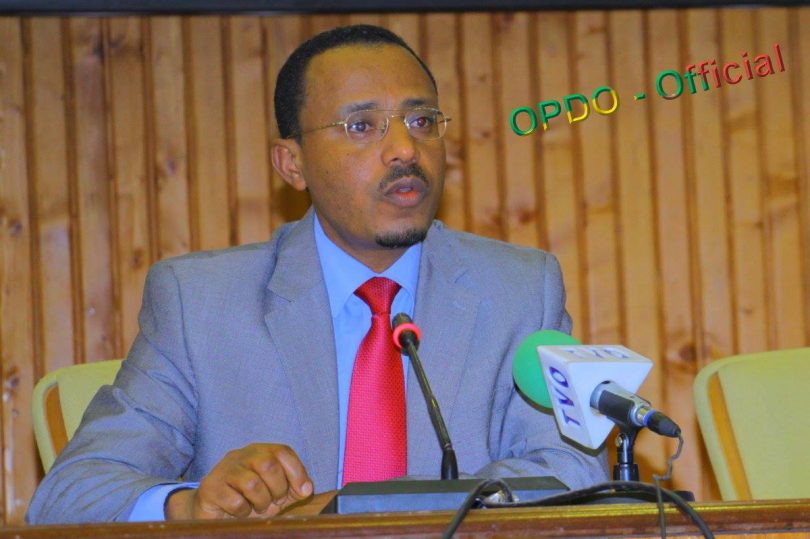 (OPride) — Street protests have subsided in Ethiopia’s restive Oromia state following the sweeping state of emergency declared in October. But a tense insecurity reigns beneath the semblance of calm. No wonder, the ruling Ethiopian People’s Revolutionary Democratic Front (EPRDF) has done little to nothing to address popular discontents that rocked the country for more than a year.

In undated but widely shared Facebook video, Lammaa Magarsaa, the President of Oromia Regional State, makes an impassioned and surprising appeal to Oromo nationalism. He calls for economic revolution in Oromia and for strengthening of Oromo unity — “with new and modern thinking.” He urges the youth to remain engaged in the country’s affairs and to get organized. He received the most sustained applause when he in a clearly Gorbachevisn style mocked the hollow rhetoric of his party: Good governance,  rent-seeking, narrow nationalism, and chauvinism.

Lammaa was appointed a president in October 2016 following a reshuffle that’s meant to calm growing tensions in the state of Oromia.

On the surface, Lammaa’s (curious) comments sound lucid and even authoritative. But it is also riddled by hypocrisies. For starters, tens of thousands of Oromo activists, leaders, and artists, who have been swept up during the year-long crackdown on peaceful protesters, remain incarcerated. An estimated 30,000 prisoners, who have been released to date, were subjected to torture and Chinese-style mass indoctrination. Given this dynamic, and considering the fact that the vast majority of those who have been incarcerated are youthful, Lammaa lacks the moral authority to lecture anyone on the need for Oromo unity or to tell the youth to get organized. It is a shame that nearly the entire leadership of the only Oromo legal opposition party is in jail. How would one even get organized if the slightest form of dissent and attempt to get organized is not tolerated and peaceful protests are deemed acts of terrorism?

Addis Ababa’s urbanization plan, which served as the immediate trigger for the protests in November 2015, continues, albeit under another name — the so-called industrial zones. Oromia’s constitutionally guaranteed special interest over Addis Ababa remains unrealized. In fact, Oromia is still under military rule. Security forces in full military uniform roam around cities, towns, and villages across Oromia detaining people, expropriating private property, and murdering anyone who showed any sign of resistance to the official rhetoric. More than 1,000 people, including children and the elderly, were killed in 2016. Yet, not a single security officer or government official have been held accountable. EPRDF is still pushing the euphemism of good governance as the cause of the popular uprising in order to avoid tackling its legitimacy crisis. Lammaa may have been allowed to speak freely but he lacks the power and authority to even exercise his own constitutional rights as a leader of a supposedly autonomous state.

His comments make one thing clear, though: The rift within the loose EPRDF coalition continues to deepen. OPDO’s one-time influential old guard — Abbadula Gamada, Kuma Demeksa, Girma Biru, Diriba Kuma, etc — are out of sight and out of mind. The relatively younger cadres like Lammaa, who were not part of the armed struggle, maybe opportunistic but their attempt to garner nationalist credentials is palpable. And the dominant Tigrayan People’s Liberation Front (TPLF) needs Lammaa and the new faces of OPDO to survive and cling to power. This is what explains Lammaa’s overindulgent lecture on nationalism, unity, and economic revolution. He is allowed to speak in those terms (terms that would have automatically landed any other Oromo in jail) for a reason. His Tigrean handlers want him to tap into and contain the rising wave of Oromo nationalism. He vowed to make history but lacking neither the will nor the raw power to challenge the status quo, his soaring nationalist rhetoric may amount to nothing more than the scratching at the power imbalance within the ruling party without actually changing anything.

Tigrean elites control the Crown Jewels of Ethiopia’s economy. Any talk of economic revolution should be preceded by serious steps to end the Tigrean choke-hold over the country’s economy and politics.
Long seen as TPLF’s puppets, the OPDO is clearly struggling for popular legitimacy, which it had clearly lost following last year’s brutal crackdown on protests and the Tigrean military’s takeover of the state it purports to govern autonomously. So the branding of Lammaa as a man of the people (who understands and speaks to the depth of public grievances) appears to be part of a public relations offensive aimed at regaining some of that lost ground. The idea is not to introduce genuine reforms to end the marginalization of the Oromo, be it at the state or federal levels, but to win back the people’s hearts and minds by riding the high horse of Oromo nationalism. However, without ending the Tigrean domination of the country, no rhetoric by the OPDO, however, lofty and spiced up by populist rhetoric, will do the trick.

Lamma exhorted the youth to wage an economic revolution. He argued that economic empowerment is the solution for the continuing marginalization of the Oromo people in Ethiopia. The fact is that the Oromo have been and are fighting for political freedoms, not just economic empowerment. Tigrean elites control the Crown Jewels of Ethiopia’s economy. Any talk of economic revolution should be preceded by serious steps to end the Tigrean choke-hold over the country’s economy and politics.

In sum, Lammaa comes off appearing to say all the right things but he conveniently sidesteps the real demand of the youth – and the Oromo people at large: The protesters want genuine self-rule, full democratic rights and proportionate share of the country’s economic and political power.

In that context, Lammaa wants to simply treat the symptoms while ignoring the real affliction. Unfortunately, his lecture is yet another change in tack to buy EPRDF some time, not a sign of real transformation.

Historically, the OPDO talked about Oromo nationalism only in either of two situations. One, when it is outfoxed by advocates of genuine Oromo nationalism, be it the rebel Oromo Liberation Front (OLF) during the 1990s and early 2000s or by the domestic “legal” opposition, the Oromo Federalist Congress, whose entire leadership is languishing in jail for speaking in the same line as did EPRDF’s Lamma. Two, if it’s master’s hold on power is threatened by Amhara nationalism disguised as Ethiopian nationalism, as was the case in the period leading up to and in the aftermath of the botched 2005 national elections. In short, when the ruling Tigrean Liberation Front (TPLF), which hatched OPDO under its wings in 1989 and runs it to this day, is in grave jeopardy.  If, however, Lamma makes good on his ambitious promises, which is a big if, and proves a Gorbachev, he will go down rewriting not only Oromo history but the future of Ethiopia for years to come.