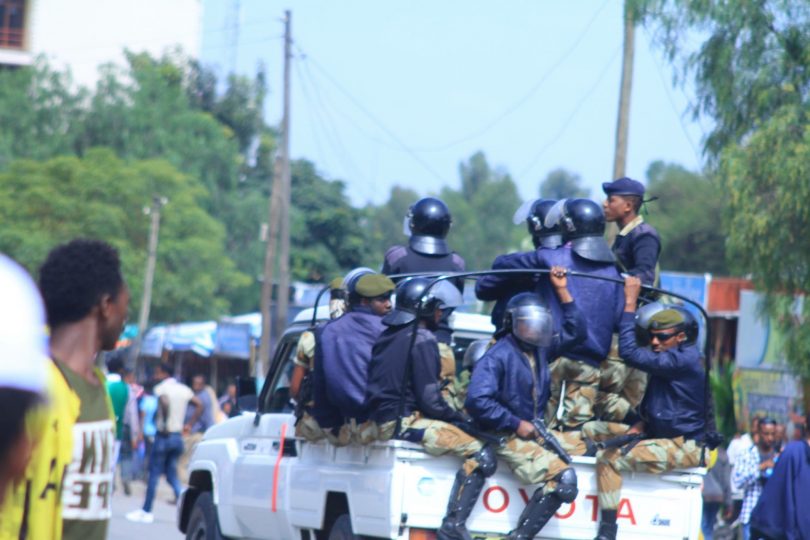 (OPride) — Ethiopia’s rubber stamp, single-party parliament voted on Thursday to extend by four months the nationwide state of emergency it declared last October. It was decreed to squash sustained and widespread protests, particularly in the populous state of Oromia.

It’s a tacit admission by the ruling Ethiopian People’s Revolutionary Democratic Front (EPRDF) that the country remains ungovernable as per usual and that they have no plan to address growing public discontents. The widely expected prolongation follows recent claims by Ethiopian authorities that “the majority of people surveyed by the government wanted the decree to be extended” although it had ostensibly restored “peace and stability” to the country. EPRDF is facing the most serious threat to its quarter of a century rule.

To be sure, for millions of Ethiopians, particularly in Oromia, the largest of Ethiopia’s nine linguistic-based states, this extension means nothing new. Oromia has been under the rule of the so-called “Command Post,” an ad-hoc military body set up to contain the unprecedented protests, since March 2016. More than 1,000 people were killed by security forces, mostly by the order of the Command Post, in Oromia alone since the #OromoProtests began in November 2015. At least 50,000 people have been arrested in the still ongoing crackdown, including more than 26,000 who were detained under the state of emergency since October 2016.

Siraj Fegessa, minister of Defense and secretary of the Command Post, blamed “anti-peace elements” and “leaders of the violent acts” in justifying the extension of the martial law to MPs. While not surprising, it underscores the contradiction of a regime that doesn’t seem to know how to deal with its legitimacy crisis. Over the past few months, EPRDF officials stopped externalizing the causes of the protests by blaming the public discontents on corruption and the lack of good governance.

Yet, aside from holding marathon meetings, promises of deep reform, and indoctrination campaigns, particularly for the tens of thousands who were arrested under the state of emergency, Ethiopia’s leaders did little, if anything, to address the protesters grievances. For example, the demonstrators in Oromia called for a genuine self-rule, the release of Oromo leaders and political prisoners, the withdrawal of military forces from towns and villages, and for an end to ongoing land grab and the systemic marginalization of the Oromo people.

Fegessa’s justification for extending the decree offers some other clues. First, he noted that some anti-peace elements “want to capitalize on disputes that arise among regional states in the country.” It is clear that he is referring to the recent cross-border raids in Oromia by the Somali Liyu Police, who have been invading Oromo territories and killing and displacing civilians. Remarkably, some of the most vocal criticism of the federal government’s complacency in the face of Liyu Police attacks on civilians came from the OPDO. Could this be a signal of yet another purge or promotion demotion for the nationalist elements within the OPDO?

Second, Ethiopia has now completed its transition from an authoritarian police state to a military dictatorship. The state of emergency formally started this process. But the outwardly accountable EPRDF leaders continue to tweak the emergency law to appease jittery donors and foreign investors.

It has already been revised twice in the past six months. Last November, Ethiopia’s rulers modified the initial decree, dropping a ban on diplomats traveling more than 40 km outside the capital Addis Ababa without authorization. Again, on March 15, Fegessa announced the relaxation of additional measures, including an end to arrests and searches without court orders, and restrictions on radio, television, and theater.

EPRDF may continue to tinker around the edges, but a military rule under the auspices of the command post is here to stay for the foreseeable future. In other words, this is “the new normal in Ethiopia.”

The state of emergency is the new normal in Ethiopia. With EPRDF still entrenched on power no normalcy is possible. https://t.co/cPCcjq85rI

A four month extension of #Ethiopia ‘s #stateofemergency. Who didn’t really see it coming? Heading towards a year of command post rule.

I respectfully disagree with people who say #SOE does’t matter coz in any way GOE has never respected human rights. #Ethiopia