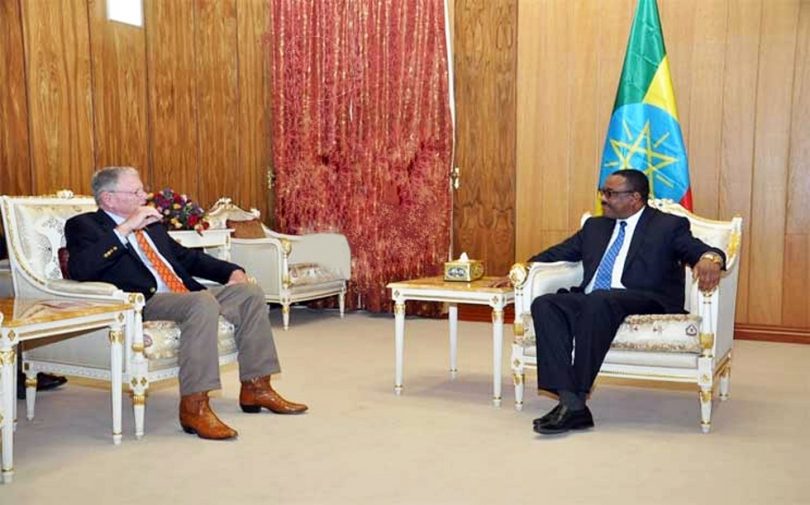 (OPride) — Ethiopian foreign minister Workineh Gebeyehu is gloating over a “successful” lobbying effort at U.S. Congress and the European parliament. He is happy that his diplomats allegedly shut down three European Parliament resolutions, which condemned Ethiopia’s human rights record, even before the proposed documents were introduced or made public. Workineh appears even more thrilled that a similar lobbying in the U.S. led to the demise of two harmful 2016 resolutions concocted by “a few scheming members of Congress.”

The Reporter’s Yohannes Anberber covered the minister’s report, which he presented to the country’s rubber-stamp parliament on April 4, 2017.

According to Yohannes, the minister told lawmakers, “senior Ethiopian government officials discussed the two resolutions with U.S. senators who love Ethiopia.” “In addition, much work has been done to raise awareness, including meeting with members of Congress and preparing a document that was meant to help kill the resolutions.”

Workineh admonished the “few members of Congress,” who he said had “a mistaken view of Ethiopia,” emphasizing how a concerted lobbying campaign resulted in placing a permanent “hold on the two resolutions” and ensuring that it is not tabled for a debate.

A closer look at Workineh’s claims shows that he is overselling his accomplishments. First, the public congressional record doesn’t show anyone ever putting a hold on the two measures. Second, the two resolutions received significant bipartisan support in a short period of time. Third, time – not Ethiopia’s lobbying – was the primary reason why Congress did not pass or debate the two resolutions. It’s a particularly busy summer for members of congress, many of whom faced tough reelection bids. And Congress adjourned for elections on September 28. “There was about a week of activity in early December after the elections when the only significant thing that passed was the legislation needed to keep the government from shutting down,” according to one person with knowledge of the process. “Other resolutions were bumped into the 115th Congress to try another day.”

There remains a great deal of support for action against Ethiopia, in part due to ongoing coordinated campaigns by Oromo and Ethiopian community groups. This is evident in the fact that the revised H.Res.128 was reintroduced in February without any objection. It’s already been cosponsored by 22 U.S. Representatives.

A fact that was not lost on Workineh himself. He singled out for criticism “an individual named Chris Smith, who is a member of Congress,” for re-introducing the resolution, which the minister acknowledged had “a potential to undermine Ethiopia’s interests.”

Here is a quick timeline for some context:

On April 20, 2016:  Senator Benjamin Cardin introduced S.Res.432 – A resolution supporting respect for human rights and encouraging inclusive governance in Ethiopia. The resolution was co-sponsored by 21 senators, including nearly a dozen on the same day it was introduced.

June 23, 2016: The Committee on Foreign Relations ordered S.Res.432 to be reported without amendment favorably.

June 28, 2016: Senator Bob Corker reported S.Res.432 without amendment and with a preamble. Without written report.

February 23, 2017: Senator James Inhofe of Oklahoma quietly visited Ethiopia. The purpose and details of his visit, including who went with him, were not disclosed. But local media reported a U.S. delegation led by Inhofe met with prime minister Hailemariam Desalegn and other Ethiopian senior government officials and discussed U.S.-Ethiopia relations. It was at this meeting that Inhofe presumably assured Hailemariam of his support.

Inhofe, a frequent Ethiopia visitor and a longtime ally of the ruling Ethiopian Peoples Revolutionary Democratic Front, is no doubt the friendly, Ethiopia-loving senator that Workineh refers to in his report. Inhofe is widely known as ‘the Ethiopia’ guy in the Senate.

According to insiders, the Republican lawmaker did, in fact, threaten to issue an anonymous “pocket hold” on S.Res.432. But that threat did not materialize since the Senate went into recess before even considering the resolution.

Minister Workineh appears confident that Ethiopia’s interests will remain protected in U.S. Congress even as the country’s human rights situation continue to deteriorate. But there is still a bipartisan support in Congress for action against Ethiopia. It doesn’t hurt that President Donald Trump is eager to slash foreign aid. Sen. Cardin is planning to re-introduce a new Ethiopia resolution again this year.

To be clear,  a resolution in and of itself does not have enforcement mechanisms but it could in theory provide the rationale for a bill that may withhold aid funds from Ethiopia. Ethiopian Americans have for years called on the U.S. to make aid conditional on human rights benchmarks and the opening democratic space, including the release of political prisoners, opposition leaders, and journalists.

None of this is to say that Ethiopia’s lobbying had no effect on the outcome of the 2016 resolutions. Ethiopia doesn’t have “their” one guy in the House of Representatives, but Girma Birru has been to the Capitol Hill several times last year, meeting with key lawmakers, including Keith Ellison and others. In fact, some members of Congress expressed irritation with the sleaze campaign by Ethiopia.

“Rather than spend hundreds of thousands on consultants to try to mislead Members of Congress on the facts and inciting e-mail form letter campaigns by supporters, the Government of Ethiopia can acknowledge their challenges and work with the U.S. government and others in the international community to seek reasonable solutions,” Smith said last month. “We are prepared to help once they are ready to face the ugly truth of what has happened and what continues to happen in Ethiopia today.” Smith was referring to a 3-page “explanatory note” sent to his office by the Ethiopian embassy. The note may have been authored by Ethiopia’s well-paid lobbyists in Washington, who seem to be taking Workineh and his representatives for a ride.

The Ethiopian regime is concerned about its image on the international arena more than ever before. Foreign investment and tourism have plummeted under the draconian state of emergency. It is now pouring millions of dollars into lobbying to influence lawmakers and silence critics abroad even as the country’s people starve to death. On January 18, 2017, the Ethiopian ambassador to the United States, Girma Birru, hired S.G.R. LLC, a U.S.-based government relations and lobbying firm, for $150,000 per month (or $1.8 million a year) “to develop and execute a public affairs plan to enhance the dialogue and relationships with policymakers, media, opinion leaders, and business leaders.”

“The campaign will promote a better understanding of Ethiopia’s political, social, and economic environment. SGR will work to strengthen U.S-Ethiopia business outreach and grow foreign direct investment in Ethiopia,” according to the Memorandum of Understanding.

This is why the diaspora should keep up the grassroots organizing and demand that the House moves quickly on H.Res.128. Workineh is certainly promising a vigorous fight.

“We are working with Ethiopian Diaspora community organizers in select places to oppose and stop the draft resolution,” he told lawmakers in Addis Ababa.