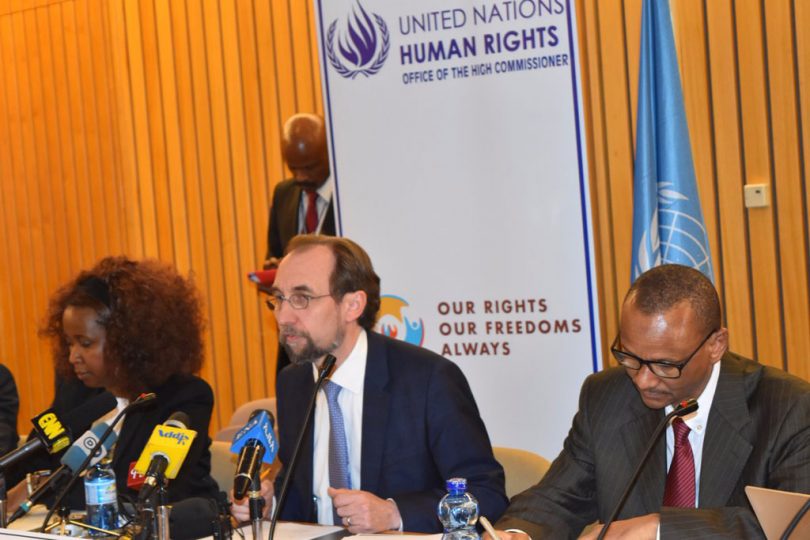 (OPride) — Ethiopia should reform a trio of its repressive laws and release individuals jailed for criticizing the state, the UN human rights chief said Thursday during a press conference in Addis Ababa.

The three-day visit by Zeid Ra’ad Al Hussein, the UN high commissioner for human rights, comes after Ethiopia’s parliament in March extended by four months a state of emergency it declared last October to quell widespread protests in Oromia and Amhara regional states.

“I believe the unrest, which broke out in November 2015 and August 2016, reveal the need for continuing and carefully planned adjustments in policy to build on and fully realize the country’s impressive achievements,” Zeid said at a press conference.

He renewed earlier calls for independent UN inquiry, including a request from his office that Ethiopia had rejected, noting that the popular protests last year “reflected public dissatisfaction with local governance, which is creating deep frustration on the part of many.”

Zeid, who met with Ethiopian Prime Minister Hailemariam Desalegn and other senior government officials during his visit, also expressed concern about the unprecedented mass arrests during protests. “Although I benefited greatly from the briefings provided to me by the Attorney General’s office, the extremely large number of arrests, over 26,000, suggests it is unlikely rule of law guarantees have been observed in every case,” he said.

“During the course of my discussions I was told legislation and policies which seemingly severely restrict rights to freedom of expression, information, association and peaceful assembly, as well as independent human rights monitoring. I am concerned about a series of critical issues. The Charities and Societies proclamation, anti-terrorism and mass media laws, for example, do not appear aligned with relevant international legal norms and should be reformed.”

The commissioner warned against continued misuse of “an excessively broad definition of terrorism” to silence journalists, bloggers and opposition members.

In an unprecedented move on May 3, Zeid visited the Qilinto remand center on the outskirts of Addis Ababa, where he met with officials and detaines, including Oromo opposition leader Bekele Gerba. While he did not mention Bekele or other high profile political prisoners at the press conference, Zeid called on authorities to release unjustly jailed prisoners.

“I am requesting the government to consider, if possible, the release of a number of individuals whose arrest or conviction appears to have been motivated by fear of criticism rather than evidence of intent to spark violent overthrow.”

This is the sharpest rebuke yet of Ethiopia’s dismal human rights record by the UN rights body. His latest comments contradict reports earlier this week by the state-affiliated Fana Broadcasting Corporate that said the commissioner hailed Ethiopia as a partner on human rights protection and promotion.

Zeid also called on the Ethiopian government to invest in the rights of its people. “I strongly believe economic, social and cultural rights are inseparable from civil and political rights: if one set of rights advances, while another set of rights are not given the requisite attention, the social pressure which may result can be dramatic,” he said.

He urged the government to “ensure a greater investment in a far more substantive, stable and open democratic space for all its people” warning about “huge costs downstream.”

“Repression of people’s voices and rights are damaging to public order; they contribute to tension, mistrust and defiance of the government; despair – and ultimately, this repression may lead to violence,” he noted. “If it stumbles, mistrust and grievance will grow, and this may well have considerable negative impact on prospects for development and for the people’s well-being.”

Oromo activists are expressing dismay at the commissioner’s failure to mention the names of Bekele and other high profile prisoners that he had visited in prison.