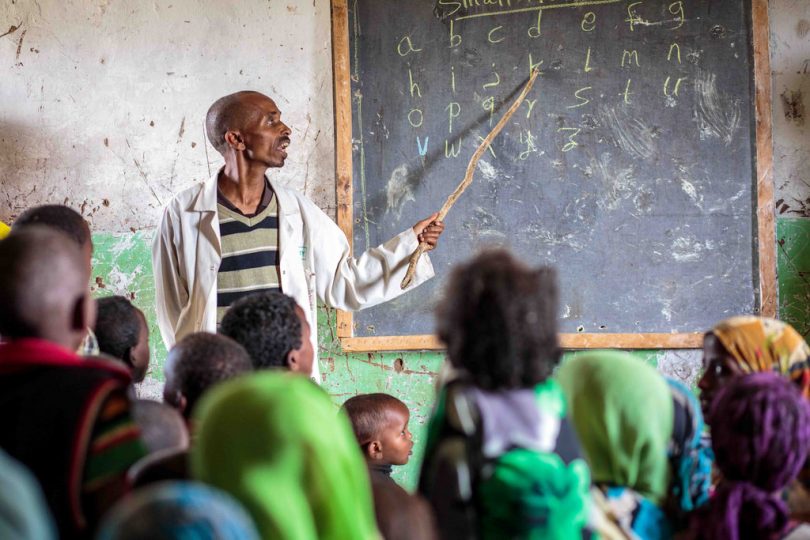 (OPride) — A recent report by Ethiopia’s state-run TV Oromiyaa (TVO) on a new primary school curriculum change in the Oromia region has taken the Oromo social media by a storm. It’s now a subject of vigorous debate, as well as much confusion and discord among Oromo activists.

In the TVO report, regional officials pointed to a 2010 reading assessment commissioned by the USAID as the basis for the now controversial changes. We tried to retrace the USAID’s role in this debacle. From May 10, 2010 to June 16, 2010, USAID allocated $90 million to conduct an Early Grade Reading Assessment (ERGA). The U.S.-based consultancy known as RTI International was hired to do the research in partnership with the Ministry of Education and regional education bureaus. RTI held a two-week training session from April 19-23, 2010 and May 10-14, 2010 for the assessors who were then dispatched to the regions. The report notes that some of the assessors were “ not pedagogical experts.”

EGRA measured pre-reading and reading skills. It took approximately 15 minutes per child to administer one-on-one oral assessment and an additional questionnaire on the student’s background to assess out-of-school variables that may influence student achievement, according to RTI.

In sum, RTI and the Ministry of Education assessed 338 schools and 13,079 students in grades 2 and 3 across eight regions and in six local languages (Afan Oromo, Amharic, Hararigna, Sidaamu Afoo, Somali and Tigrinya). As shown in the table below, the study was done in 16 woredas and 63 schools across Oromia and involved 2491 students. 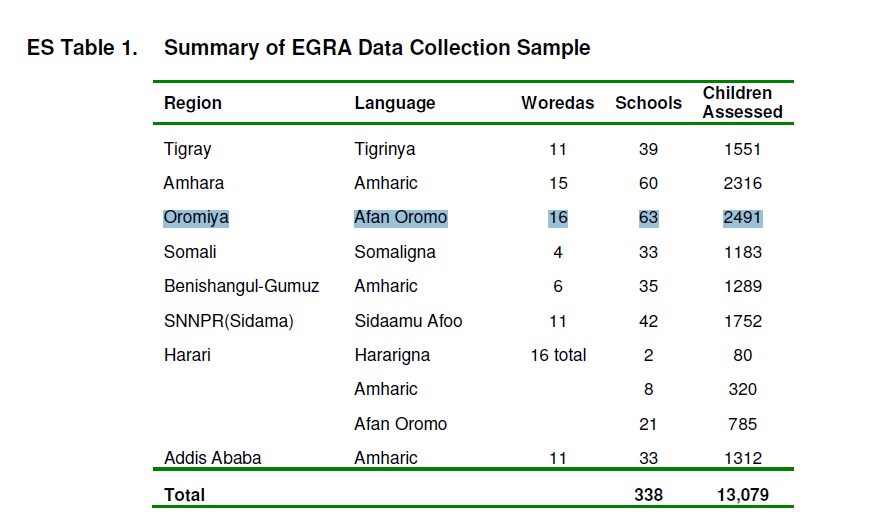 In their own words, the researchers “wanted to know what aspects of scripts and writing systems were related to the rate at which letters and words were read.” Consequently, the RTI study sought to answers the following questions:

The results were stunning. First, despite its sheer size and unique geographic spread, the ERGA data did not “provide a causal link between reading skills and language scripts.” But the study revealed that “by the end of second grade, 34 percent of students were unable to read a single word, and 48 percent scored a zero in reading.” Over the last 20 years, the USAID spent more than $290 million to support Ethiopia’s basic education programs. But overall learning outcomes, particularly in reading, remained dismal owing to “the quality of teaching; the availability of instructional resources; and the backgrounds of pupils, families, teachers and communities, as well as the specific instructional support structures of classrooms utilizing particular scripts.” 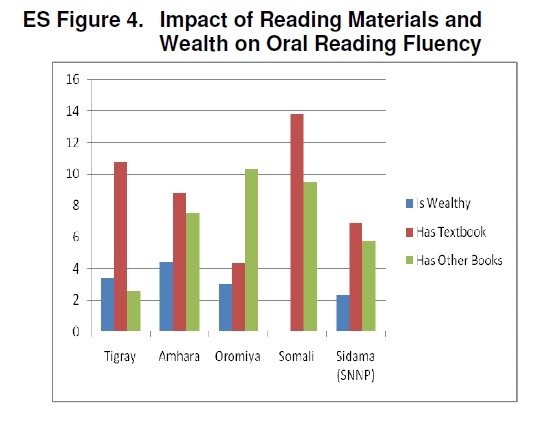 As part of that effort, in 2014, USAID acknowledged that RTI and READ developed a new national curriculum framework for reading and writing across different languages, regions, and grades together with the Ministry of Education.

Speaking at the launch of the “new mother tongue reading program for primary schools,” USAID Ethiopia Director Dennis Weller hailed the completion of the new curriculum for grades 1-4 as “a major milestone on the road to raising reading comprehension and proficiency for children regardless of where they happen to be born.” He added that “a similar process of content development for grade 5-8 textbooks began this summer and is progressing well.”

Weller also noted that USAID earmarked (additional?) $10 million to enable “the Ministry of Education to train no less than 65,000 teachers on how to implement and use the new mother tongue curriculum and materials in the classroom.” He added that  “nearly 15,000 grade 1-4 teachers have already been trained, with 50,000 additional teachers expected to be trained in the coming weeks. Once trained, these teachers will immediately begin implementing the new grade 1-4 curriculum and package of teaching and learning materials, changing the way over 6.5 million students learn to read and write in their mother tongue languages.”

The ERGA study had many other eye-popping findings. For example, it said, only 1 in 6 children in Oromia had any other reading materials. “Although children attend school for two or three years, a significant percentage is illiterate,” according to USAID. “When asked to read a simple passage at a Grade 2 level, many regions had more than 30 percent of Grade 2 and 20 percent of Grade 3 unable to do so successfully, with children in Sidama zone and Oromia region particularly struggling.” But nowhere in the report does it say changing the order of the Afaan Oromo alphabet will improve reading outcomes.

In September 2010, RTI presented a set of recommendations to the Ministry of Education. These include:

What We Don’t Know

There is little disagreement on the core problem here: The education quality crisis in Ethiopia needs fixing. That Oromo students identified the Qubee letters far better than those studying in the Ge’ez script but they were significantly less proficient in reading Afaan Oromo words could very well be true. The disagreement here though is on the proposed solutions. This is underscored by a key question that everyone is asking: JUST HOW DOES REORDERING THE AFAAN OROMO ALPHABET IMPROVE READING AND LEARNING OUTCOMES?

Those involved in the curriculum development insist that a determination was made based on a linguistic study and “L” — the first word in the new Afaan Oromo alphabet order — is not only easy to vocalize and write for young pupils but it is also the most frequently used letter (sound) in the Oromo language. In August 2015, Tolemariam Tufa, a professor at Addis Ababa University and one of the key players behind the redesign, claimed without providing specifics that a computer software that calculates letter frequencies was used to confirm this.

It is entirely possible that RTI and USAID conducted additional — perhaps a yet to be published study — providing the rationale for the Afaan Oromo alphabet change. But in the absence of such data, there is probable cause to suspect foul play either from federal and regional authorities or an ill-informed tyranny of experts for this hair-raising change.

The adoption of Qubee and the development of Afaan Oromo as a written language is one of the most enduring gains of the Oromo struggle. The political repression and marginalization that followed emperor Menelik II’s war of conquest meant that the Oromo had lost much of its culture and civilizations. But for the most part, the Oromo language remained intact. Still, it took relentless struggle and immense sacrifices to make Oromo a written language. From Onesmos Nasib, who translated the bible into the Oromo language in the 1880s, to Sheik Bakri Saphalo, Sheik Muhammad Rashad Abdule to Haile Fida and Abdullahi Yusuf, pioneer Oromo linguists strived often under difficult circumstances to find a suitable writing system for Afaan Oromo. Millions died fighting to enable Oromo children to learn in their own mother tongue. The adoption of Qubee — with the steadfast leadership of the Oromo Liberation Front in the 1990s — was welcomed and embraced by all Oromos across political and other divides.

All told, even with its many shortcomings, the Oromia Education Bureau deserves our respect for the remarkable work it has done to grow the Oromo language to the height it now enjoys in the country. Some Afaan Oromo departments now offer a Ph.D. program. In the intervening years, many songs, including alphabet songs for children, have been sung and produced. The Qubee as we know it — ABCD — is now part of the Oromo consciousness. A generation of Oromo youth came of age singing that song. It is indeed a unifying national anthem for Oromo children. Despite dialect variations, every child in Oromia first learns the ABCD. It is the thread that binds together the hopes, dreams and aspirations of a generation that is now revolting against the government.

This is the context that is missing from the RTI study. The lack of this appropriate context suggests little understanding and appreciation for the historical nuances and political sensitivities around Qubee. Ultimately, the Ministry of Education and its foreign NGO partners are now attempting to undo the progress made over the past two decades to develop Afaan Oromo. Its success as a language of instruction and business hinged on popular acceptance and the Latin script’s suitability for the language.

That’s why the latest changes  could easily erase and tarnish the Oromo People’s Democratic Organization (OPDO’s) contribution to the development of Qubee. A swift and furious opposition is already gathering momentum online. So far the emerging consensus seems to be that the altering of Qubee is an assault on Oromummaa itself.

Ethiopia is in the midst of a stifling state of emergency that was declared last October to quell widespread protests. Left unaddressed, the Qubee fiasco will add to the growing list of public grievances. It will also widen the gap and mistrust between the government and the public. This could also dodge and frustrate OPDO’s ongoing bid to regain some lost ground after facing statewide rejection by the largely youthful protesters. If that happens,  it will be a historical mistake from which the OPDO may never recover.