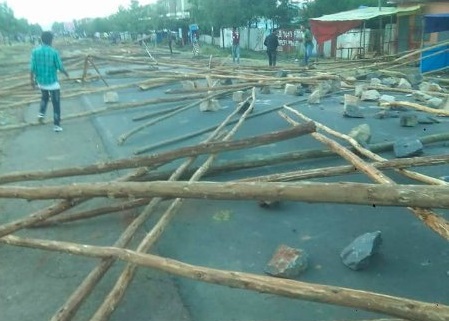 Federal security forces on Thursday fired live ammunition at protesters who had blocked roads, killing 10 and wounding 20 others in Ethiopia’s restive town of Ambo in central Oromia, according to a spokesperson for the town. The killing signals a dangerous escalation as regional Oromo authorities call for meaningful implementation of the country’s federalist constitution.

Languages to watch for: Oromia officials are denouncing the protests as “lawlessness” and “unnecessary” while blaming enemies of the regional state for organizing the demonstrations. Others, mostly pro-government bloggers and media outlets, are characterizing the situation as a “security breakdown.” Analysts warn that the latter language follows earlier calls by the same groups for the reimposition of the state of emergency to subdue assertive Oromia officials.


Ethiopian Prime Minister Hailemariam Desalegn took questions from members of Parliament on the ongoing Oromo-Somali border conflict and recent high level resignations by the Speaker of the House and a key policy aide.

At least 10 dead, 20 wounded in Ethiopia as #OromoProtests expand

The Director General of Ethiopian Broadcasting Authority, Zeray Asgedom, on Wednesday dismissed comments by the Communications Minister Dr. Negeri Lencho, in which he warned couple of pro-government media outlets for inciting ethnic violence, as the minister’s own personal opinions.

Mohammed Ademo: “Asgedom’s comments…undercutting Negeri Lencho’s warnings about Zemi FM and ENN’s inciting coverage of last week’s events in Illu Abba Bora reminded me of this exchange from my interview last year with Juneydi Sado: For every Oromo (generally non-Tigrayan) minister or office holder there’s always an empowered deputy keeping watch over him or her. In this case, Negeri is Zeray’s superior yet the latter minced no words in undermining him. Nothing new here except the timing.”