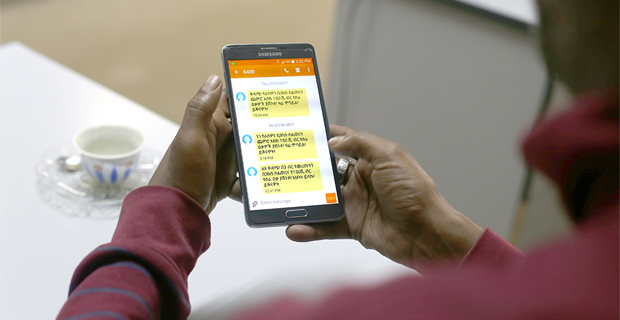 “Help rehabilitate our people displaced from the Ethiopian Somali region by texting “O” to 700 to give 5 birr,” Addisu Arega, the spokesperson for Oromia State, announced on Sep. 28, 2017 via Facebook and Twitter. “We thank Ethio Telecom for their huge support in setting up the campaign free of charge.”

However, the campaign that was meant to raise relief funds for the more than half a million Oromos displaced from the Somali Regional State lasted a mere five hours.

Two days later, Addisu was forced to confirm the abrupt cessation of the SMS campaign after donors reported trouble with the system. In a long Facebook post, Addisu characterized Ethio Telecom’s decision to take down the fundraising campaign as regrettable.

“The text-to-give SMS 700 campaign was one of the ways we hoped to raise money to rehabilitate our people,” he wrote in a tone that betrayed his disappointment.

“This effort failed. Ethio Telecom has informed us discontinuing the SMS 700 campaign and that all the funds raised so far will be refunded to the donors.”

But Addisu vowed that efforts by Oromia State to raise relief money will go on regardless. A few days later, on Oct. 3, he stated Ethio Telecom’s decision was unacceptable and that Oromia was trying to revive the effort.

After the campaign ended abruptly, the question on the mind of would-be donors was: Why did Ethio Telecom block us from helping our displaced compatriots in dire need?

The outrage on social media was swift and sweeping. Addisu urged the aggrieved public not to dwell on the ending of the text campaign but to seek creative ways to redouble their fundraising efforts.

An email chain from the Chief Executive Officer of Ethio Telecom, Andualem Admassie Abate, viewed exclusively by OPride, give the most comprehensive account of how the agency handled the decision.

The CEO sent the emails to Ethiopia’s Minister of Communication and Information Technology, Debretsion Gebremichael1, who has direct oversight of the telecom provider. He was reportedly on a visit to South Korea at the time of the SMS debacle.

Andualem, 42, has been with Ethio Telecom since 2010. He took over as the CEO in June 2013. From December 2012 to June 2013, he served as the Chief of Human Resources officer and Chief Internal Audit officer in Ethio Telecom, with France Telecom, Sofrecom and Orange, according to his LinkedIn page.

From the emails seen by OPride, Andualem comes off as a subordinate who takes orders without questioning them. In fact, during the exchange, he sounded petrified and rushed: His emails contained several typos and grammatical errors. At one point, he seems to have attached the same document three times. Andualem, who like Debretsion is a PhD holder, signs off every email reply to his boss as “with great respect,” a salutation he doesn’t seem to use for other colleagues. The exchanges show the asymmetrical power relationship between the two officials and offer insights into the inner-workings of Ethiopia’s power élite, where officials of Tigrean ethnic origin are accused of being the overlords of all others.

In his emails, Andualem seems to suggest that Ethio Telecom made the decision to halt Oromia’s SMS campaign in order to avoid “creating competition” between the two regional states. However, the involvement of senior officials, who had no direct oversight responsibility on the telecom giant, points to an undue pressure from the Somali region and its benefactors, particularly the head of Ethiopia’s military intelligence.

“The moment we sent the bulk SMS, the first call was from H.E. Ato Abdi [Mohamoud Omar] (Ethiopia Somali State’s President) and he requested to create the same short code and to do for them as well,” Andualem wrote.

“I also received a call from H.E. Ato Demeke [Mekonnen] and Ato Kebede [Chane]. I had a call from General Geberdela.”

While Demeke is a Social Cluster Coordinator with the rank of Deputy Prime Minister, Kebede Chane is the Minister of Federal Affairs and Pastoral Development. Like Andualem, Demeke and Kebede are senior leaders of the Amhara National Democratic Movement (ANDM), the junior partner in the ruling coalition and the governing party of the Amhara Regional State.

“Our conversation was all about the content of the SMS, which creates [sic] a big complain [sic] from different stakeholders,” Andualem wrote referring to the phone call he had with the two ANDM officials. He added, we agreed, “it is better to suspend [the SMS campaign] and ask an excuse [sic] via SMS.”

Open in new tab
OPride could not independently confirm the text of Ethio Telecom’s SMS announcing the decision or whether such a message was ever sent. The agency did not post any statements on its website.

By far, it is Gen. Gebre Dela’s involvement in the decision-making process that is quite intriguing and eyebrow-raising. As head of the powerful Military Intelligence Department, Gen. Gebre wields considerable power in crisis-ridden Ethiopia, particularly in the last three years. He is widely seen as the power behind Abdi Omar, a former intelligence officer and the current chief of the Liyu Police, which has waged war against adjoining Oromia districts — killing hundreds of Oromo civilians and displacing hundreds of thousands.

Abdi Omar is implicated in horrendous human rights violations in the Somali state that he rules with an iron-fist. Gen. Gebre is credited not only with Abdi Omar’s meteoric rise from an informant to head of security for the Somali region and then to its president but also for protecting the embattled warlord.

The leaked emails show Ethio Telecom’s susceptibility to influence and partiality in handling the situation. For example, whereas Abdi Illey had a fair hearing and seems to have galvanized allies in the federal government to lobby on his behalf, Andualem’s emails suggest Oromia was only informed of the decision — verbally — after Ethio Telecom suspended the campaign.

The crisis along the Oromia-Somali border was unprecedented. It’s the largest internal displacement of civilians in recent memory. But it did not generate a national outrage or campaign to resettle the victims.

This raises a lot of pertinent questions for Ethio Telecom: First, How is creating two campaigns a competition? Surely, there were Somali-Ethiopians who were displaced during the crisis. Even if the campaign was deemed controversial, for whatever reason, why didn’t Ethio Telecom consult with the two parties and launch a new NATIONAL campaign (as it did with the Koshe case)?

The SMS message in Afaan Oromo was short, factually correct and straightforward: “Text “O” to 700 to give 5 birr for the rehabilitation of our citizens displaced from Ethiopian Somali region.”

The telecom company didn’t have problem with the content. Why? Because they took it online. The language passed Ethio Telecom’s internal approval and fact-checking process. What exactly did ANDM officials find objectionable? Who are the stakeholders that allegedly complained to them about the content of the SMS message? What about the message? Based on the email disclosures, this argument simply doesn’t hold water, which lends credence to the question of external influence.

The SMS debacle also corroborates many earlier complaints by former officials of the ruling party, who have since defected, that Tigrean underlings routinely overruled non-Tigrean principals from the other three coalition members of the ruling Ethiopian People’s Revolutionary Democratic Front (EPRDF), which has single-handedly ruled Ethiopia for 26 years.

It’s also a classic example of how important decisions, which affect the livelihood of the Ethiopian people, are arbitrarily made at the highest echelons of power.

The total domination of the country’s political, economic, social, and security structures by the party that Debretsion heads as Deputy Chairman, the TPLF stoked widespread protests in Oromia starting in April 2014. The protests later spread to the Southern and Amhara states. This prompted a declaration of a state of emergency in October 2016. However, protests resumed immediately upon the lifting of emergency rule. Moreover, the ruling party in Oromia, the Oromo People’s Democratic Organization (OPDO), the second most junior member of EPRDF, embraced the demands of the protesters and openly expressed its commitment to respond positively to popular grievances. 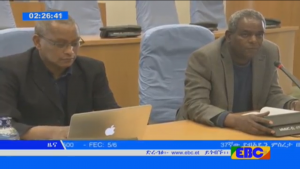 In what opponents describe as a desperate bid to contain the growing crisis, the top leaders of the TPLF remain deadlocked on the way forward. Its central committee has been in meetings since early October. Debretsion is widely expected to takeover as the chairman of the powerful Marxist-Leninist party. He was part of the armed struggle that toppled the previous military junta in 1991. He has held many senior government positions, including as the Deputy Head of Intelligence and Deputy Prime Minister.

Debretsion is seen as the power behind Hailemariam, who is dismissed only as a figurehead and a placeholder exercising nominal control over key security and power ministries. He once publicly lamented not receiving intelligence briefs and being reduced to making decisions on hearsay. Debretsion is said to be the person who in fact supplies the prime minister with his talking points, including on the recent security directive, which opponents call a backdoor reimposition of the state of emergency, announced through the National Security Council, a body that lacks the legal and constitutional basis to do so.

A day in the life of SMS campaign

Andualem’s explanation of his agency’s handling of the Somali region’s complaint reinforces suspicions of undue external pressure on Ethio Telecom and suggests a later decision not to leave any paper trail. “We didn’t communicate [our decision to] them via a letter when it [the campaign] was stopped,” he wrote in a haste.

The leaked emails show the process of initiating the SMS campaign was fairly straightforward. No one from Ethio Telecom objected to Oromia’s request seeking a waiver of the standard 40 percent share the agency typically retains. The agency approved the request within four business days.

Here is the timeline:

Amerti L. Dechassa is a young Oromo activist based in Oslo, Norway. Her interests include identity, human rights, and conflicts.