Ethiopia: In Debretsion Gebremichael, TPLF elected a hardliner — dashing hopes of reform and in a victory for the intelligence faction 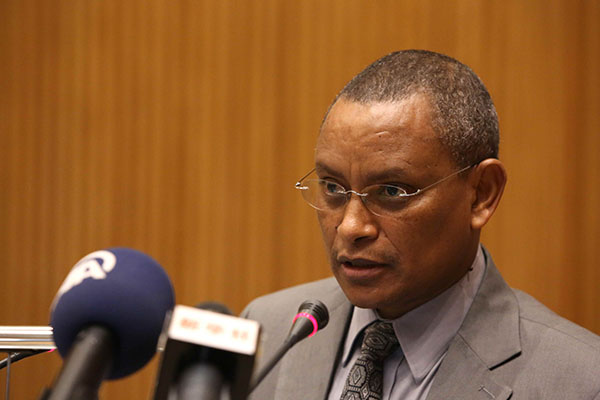 Debretsion, who in the 1970s placed his university studies on hold to serve as a rebel radio communication technician, is currently Ethiopia’s Minister of Communication and Information Technology. Until recently, the veteran of TPLF’s armed struggle against the communist regime was the Finance and Economy Cluster Coordinator with a rank of Deputy Prime Minister. In addition to his powerful perch atop TPLF and federal ministerial portfolio, Debretsion also chairs the Boards of the Grand Ethiopian Renaissance Dam and Ethiopian Electric Power Corporation.

The current central committee meeting, the longest since the party’s ruinous 2001 split, began in early October amid deepening political crisis, triggered by three years of relentless protests by the Oromo, the largest of Ethiopia’s 80-plus ethnic groups.

It also took place in the backdrop of the largest internal displacement of civilians in recent memory. More than 600,000 Oromo were expelled from the Somali region of Ethiopia in the last few months following sustained attacks by the Somali Special Force known as Liyu Police, against bordering Oromia districts.

With the support or silence of the Tigrean-dominated Ethiopian military’s high command,  Abdi Iley, the Somali region’s strongman who is a staunch patron of the TPLF and accused of gross human rights violations in the state where his iron will is the law, staged months of violent military incursions into the neighboring state.

Ethiopian government spokesperson Negeri Lencho told the Voice of America’s Jalane Gamada on Tuesday that displacements and killings of Oromo civilians by the Liyu Police continue unabated. Dozens of people were killed this week alone. Negeri also lamented that while regional security forces in Oromia were quick to arrest suspects and are cooperating fully with federal police, rogue officials in the Somali State have thus far resisted federal pressure and outright refused to bring perpetrators to justice.

In short, for TPLF, a party representing a tiny minority, whose total dominance over the entire country for a quarter of a century is being severely challenged, the stakes could not have been higher.

Since 1990, TPLF has remained at the top of the pyramid in the four-party ruling coalition, the Ethiopian People’s Revolutionary Democratic Front (EPRDF). But, of late, one-time junior Oromo partners in the loosely allied bloc, the Oromo People’s Democratic Organization (OPDO), has begun to assert itself and make overtures for close coöperation with another EPRDF partner, the Amhara National Democratic Movement (ANDM)—making continued Tigrean dominance over the country tenuous.

As the dominoes started to fall earlier this week, the TPLF Central Committee huddled in Mekele, the Tigray state’s capital, demoted its chairman and the sitting president of Tigray State, Abay Woldu; suspended Azeb Mesfin, widow of the late Prime Minister Meles Zenawi; downgraded one and reprimanded two other executive committee members. Of the nine TPLF politburo members, only two seem to have escaped unscathed: Debretsion and the longtime security chief, Getachew Assefa. The third left to take a prestigious international job as the head of World Health Organization.

Insiders depicted a multifront battle inside the secretive Leninist-Marxist party. One battle was waged by Debretsion and the party’s intelligence arm for the control of the party and its direction. Debretsion was formerly deputy under the powerful intelligence chief, the late Kinfe Gebremedhin. Even after moving into his new assignment, Debretsion maintained and expanded his involvement in the intelligence agency. Another factional battle was spearheaded by Azeb and her cronies in the parastatal Endowment Fund for the Rehabilitation of Tigray (EFFORT) over continuing to uphold the legacy of the late leader amid a clamor by the old guard to retire it; and yet another was waged by hardliners to keep up Tigrayan hegemony over Ethiopian politics, economy and security and on competing prescriptions about how to do so in the face of fierce resistance.

In an unprecedented public self-criticism, TPLF recently acknowledged “fundamental shortcomings in building the capacity of the youth and intellectuals, facilitating their involvement and making them beneficiaries.” The theory goes, as Tigrayan elites turned outward, removed as they were from the daily indignities of the people of Tigray that they supposedly represent, poor peasants and the youth were neglected. In addition, Tigrayan intellectuals were left out of key decision making as various factions within TPLF sought to prop up their cronies to control the party apparatus.

By turning inward, TPLF leaders focused on personal enrichment: Many own businesses and are involved in various investment schemes in Ethiopia and abroad often in the names of their relatives; Others spent years pursuing higher education on government’s time and dime; many, including the newly minted chairman, go overseas for medical treatment and routine checkups and send their children and relatives to expensive private colleges in the U.S, Europe, and Asia.

Still, until Wednesday reports out of Mekelle left the impression that a younger intellectual or someone from the second generation of TPLF will take up the reins. Instead, Debretsion — a member of the old-guard and former deputy chair — was installed.

The party has recently acknowledged that its “strategic leadership lacks internal unity.” Newly disclosed internal party documents suggest that Debretsion’s elevation is unlikely to mend the divide. In fact, Abay’s departure and the suspension of Azeb and the sidelining of her loyalists in EFFORT is likely to provoke new divisions.

Reactions to the latest leadership shakeup from Tigrayan activists, bloggers and former TPLF officials are mixed at best. While some have for years lamented “disjointed leadership” in post-Meles era, a recent article in Addis Fortune excoriates the organization’s old guard for preventing the leadership left by the former leader, now sidelined, to do their job without meddling by those who were supposedly long retired from formal leadership role. In an interview with BBC’s new Horn of Africa service, Gebru Asrat, former president of Tigray state and politburo, who was purged during the 2001 split, said the shakeup has nothing to do with advancing the public’s interest and that it is merely one faction’s victory in the ongoing “power struggle.”

Earlier statements by TPLF central committee also remarked that the front’s “relations with sister organizations have been marked with shortcomings.” However, Debretsion’s elevation would inspire no confidence that those broken relations will be repaired. He comes off as gruff, wooden, and extremely arrogant. To make matters worse, supporters of the newly installed leadership, writing for the pro-TPLF website Tigrai Online, have issued a clarion call for the heads of the reformist leaders of the OPDO. More importantly, from the leaked internal documents, Debretsion expresses grave misgivings about the thinking, as well as the practice of OPDO’s current reformist leaders.

In fact, in a recent talking points seen by OPride, he accuses the OPDO of veering from the ruling party’s revolutionary democracy platform and for undermining the government’s security measures. The leaked documents show that Debretsion has secretly instructed “law enforcement” agencies to look for incriminating evidence against the top leaders of OPDO who enjoy overwhelming public support. Such an ominous development in the ongoing saga of relentless political unrest is tantamount to pouring fuel on a fire about to go out of firemen’s control.

A cursory look at pro-TPLF websites (Aiga, Tigrai Online, and Horn Affairs) shows a nostalgia by Tigrayan élite for the all-too-powerful TPLF of the pre-2001 days and a scramble to portray the new leaders as reform-minded visionaries. The spin masters may have received their talking points directly from Debretsion or his associates. Several U.S.-based bloggers and editors, including Aiga, maintain direct contact with the new chairman. Some even email him unsolicited advice and readers feedback they believe are constructive as a subtle nudge for policy action — which means their threats cannot be dismissed as idle talk.

Three statements, issued by TPLF before the conclusion of its leaders marathon meeting on Nov. 29, promised that once the criticism and self-criticism sessions were concluded, the organization would “undergo deep renewal, devise strategies to tackle the weaknesses identified during the evaluation process, and build the organizational capacity necessary to effectively carry out its regional as well as national roles.”

However, aside from shifting people at the top, there are no indications that the organization did anything in the form of revising the policies that have caused three years of protests and federal government-orchestrated mayhem throughout the country, particularly in Oromia.  The Central Committee’s final statement simply doubles down on old rhetoric–intensifying the fight against rent-seekers, chauvinists and narrow forces, instituting good governance, and speeding up economic development. Moreover, if as Addis Fortune suggests TPLF’s game plan was “to re-engineer the top leadership with a recomposition of leaders who belong to the second generation of the struggle and highly driven,” the installment of Debretsion seems like another wasted opportunity.

Unlike OPDO, which replaced its chairman as well as Deputy, totally revamped its executive and central committees and brought in totally new faces to its leadership, TPLF’s claim of “deep renewal” rings hollow. OPDO outlined its policy priorities, which center around judiciously implementing the country’s constitution, whose promises of democratic rights remained only as a decoration on paper, and heeding popular calls for empowerment. Contrarily, TPLF is offering nothing new except superficial changes to its aging leadership and extolling its “Phoenix-like” qualities to renew itself and maintain its hegemony.

The current leadership decay and lack of direction in the TPLF is the result of a shortsighted purge of more than a decade ago when Meles cleansed the party of individuals deemed a threat to his hold on absolute power. In their place, he groomed loyalists who religiously executed his diktat. This left the task of crafting the party’s vision and direction to the powerful late prime minister. His cronies rubberstamped the great leader’s policies and quietly turned to personal development and economic self-empowerment. This apparent neglect and the vacuüm left by Zenawi’s sudden demise led many a Tigrayan to openly lament about ineffective, visionless, and disjointed leadership. The latest marathon appraisal and public self-criticism is, therefore, an effort to placate growing Tigrayan discontents over TPLF’s diminishing stature.