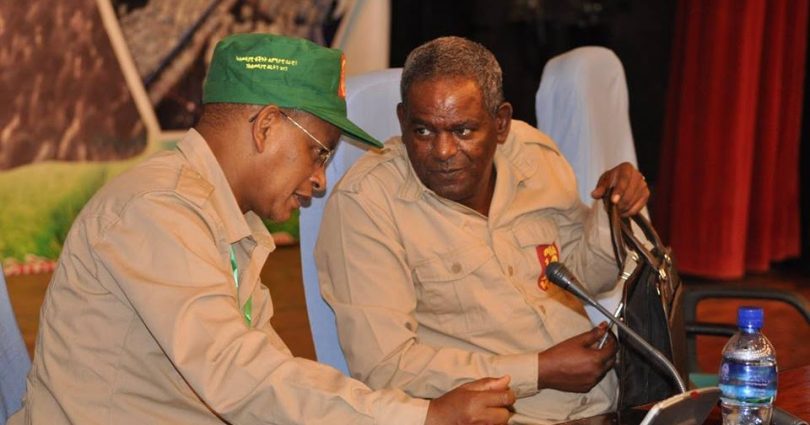 Part I of our analysis argued that by elevating Debretsion, a hardliner, TPLF dashed hopes of reform and that the former deputy spy chief’s election is a victory for the intelligence faction. Part II looks at Debretsion’s rise from a low level rebel radio communications technician to the top of the dominant TPLF hierarchy.

Since former Ethiopian prime minister Meles Zenawi’s death in 2012, Debretsion has emerged as the most powerful member of TPLF at the federal level. Publicly he has carefully cultivated an image of a hard-working and “tech-savvy technocrat with doctoral studies in technology.” However, a recently leaked cache of internal documents reviewed by OPride paints a portrait of a calculating Machiavellian feared by subordinates but one who is largely idle and who often appears distant, offering only terse and uninspired feedback on detailed technical reports. His online interactions with Ethiopian colleagues is usually cordial but brief. He appears more engaged and personable when conversing with foreigners. Still, dozens of emails viewed by OPride show a lacking ability to engage in nuanced conversations in English and a preference for informal face-to-face meetings.

A testament to his commanding and fearsome persona, nearly all subordinates, particularly those of non-Tigrayan ethnicity, often greet him as “your excellency” and sign off with “with great respect.” He rarely addresses his Ethiopian subjects by name but when he does, he usually writes “selam X” and signs off simply as “Debre.” By contrast, his Tigrayan associates usually refer to him as “Debre or Debretsi.”

In 2012, shortly after his elevation as Deputy Prime Minister, according to one document seen by OPride, Debretsion casually told a UN official, “I already had big responsibilities but after Meles, we felt we need to restructure the cabinet so that there will be a team to take full charge of the nation.”

It is not clear who the “team” included and why the newly installed prime minister, Hailemariam Desalegn, could not “take full charge of the nation” as did his predecessor.

While the plan was for former rebels to be gradually phased out, he vowed not to step back from the added responsibilities. “As you know I’m one of those fighters who gave their everything to the good of our people and nation, so I can’t step back. In any case, I’ll try my best to serve more.”

Moreover, it was clear that he had his sights set higher. Although he was tasked with overseeing the economic sector as Deputy Prime Minister, internal documents viewed by OPride reveal that he was receiving periodic briefs and progress reports from across the government and his footprints are all over the place. His newly appointed deputy, Fetlework Gebregziabher, formerly head of the Financial Intelligence Center and previously an enforcer in the Addis Ababa municipal party office, has the same reputation of inflexibility and dogmatic adherence to party ideology and little concern for the wellbeing of the public.

It is this vehemently hardline leadership that Tigrayan spin masters are trying to present as reformers.  The party’s propaganda machine is suggesting that the contest has always been between the reform-minded new leadership and those who were intent on “maintaining the status quo and doing business as usual.” To bolster their argument about a dynamic new team at the helm of TPLF, they are touting the academic credentials of the new leadership: Fetlework GebreEgziabher (educated at the London School of Economics), Debretsion (Capella University), Abraham Tekeste (Switzerland), Getachew Reda (University of Alabama).

It is to be remembered that Ethiopia’s current lame-duck prime minister did the same last year when unveiling his PhD-heavy cabinet, which have come to witness the lowest point in the ruling party’s quarter of a century hold on power — unable to manage minor crises, for example, restraining the outlaw behavior of the Somali Regional President, whose military adventures have since spiraled out of control of the federal government.

A foreign degree is never a measure of a leader’s acumen. For instance, Debretsion, who was reportedly rejected from various Ph.D. programs before settling on the Minnesota-based Capella University, was at best a mediocre student. He allegedly relied on the support of a team of hired researchers and writing coaches for his thesis. According to a source familiar with the party’s grueling appraisal process, he’s in fact censured for lack of imagination and inability to produce anything of substance. Rather known as the bullet points guy, Debretsion is rated low for his inability to connect with audiences but also to produce serious policy papers.

Not only does the new leadership lack any reformist credentials, Debretsion is too close to the country’s powerful military-industrial complex, which has been accused widely of exacerbating an already volatile situation. Several high ranking army generals are accused of being involved in contraband and illicit trade and being outside of the normal chain of command. Although his stubbornness is legendary and his reputation for inflexibility is long established, not to mention his impatience and quick temper, it is not clear whether Debretsion can and is willing to reign in the military given his cozy relationship with Ethiopia’s military-industrial complex. In fact, Debretsion directly controls the country’s largest military contractor, the Metals and Engineering Corporation (METC), which is awarded huge government contracts without undergoing the usual bidding process. METC has lately eclipsed the influence of the plethora of companies housed under EFFORT–also overseen by the organization Debretsion leads.  By sidelining the mercurial widow of the former Prime Minister Meles Zenawi, Debretsion has consolidated key levers of power in his sole hands. METC and EFFORT together control the commanding heights of the country’s economy.

Consequently, it is no wonder that the new TPLF chairman is widely seen as the power behind Hailemariam, who is dismissed as a figurehead and a placeholder exercising nominal control over key security and power ministries. Hailemariam once publicly lamented not receiving intelligence briefs and being reduced to making decisions on hearsay. Debretsion appears to be the person who in fact supplies the prime minister with his talking points, including on the recent security directive, which opponents call a new state of emergency, announced through the National Security Council, a body that lacks the legal and constitutional basis to do so.

Despite the bleak prognosis, Debretsion and the new TPLF leaders face a unique opportunity to embrace reform and save the country from a catastrophic civil war and even state collapse. OPDO has already set in motion an ambitious plan to realize the promises of the country’s constitution. Unfortunately, so far, all indications are that Debretsion’s TPLF is likely to seek a combination of purges and subversion to undermine OPDO’s efforts. That would be a historic mistake which will set the country back for decades to come.

In addition to his senior party position as a member of the Executive Committee of TPLF, and now its chairman, Debretsion holds key board positions: