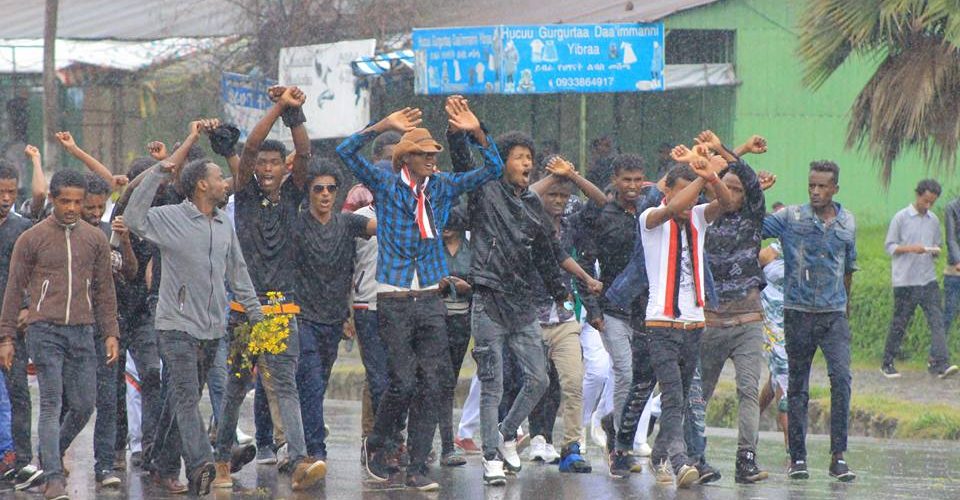 (OPride) — More than a dozen civilians, including a 10-year-old boy and a father and son, killed by Ethiopian Defense Forces and many others wounded across Oromia and in parts of Amhara states. The renewed protests have reportedly prompted panicked Ethiopian authorities to throttle or shutdown of social media.

Amhara and Oromia together account for more than 60 percent of Ethiopia’s population.

There were reports of troubles at least at two universities in Tigray and Amhara states over the weekend. Tensions boiled over after an Amhara student was killed at Adigrat University, setting off protests by Oromo and Amhara students.

Further south, the killings of Oromo civilians by the expansionist Somali State Liyu Police have become a common occurrence. At least 670,000 people were displaced – most of them in the second half of 2017 – by the Somali paramilitary force with tacit backing of rogue generals in the national army. It was one such attack by Liyu Police that on Monday triggered spontaneous protests in Calanqo, a historic town approximately 371 kms from the capital Addis Ababa, in Oromia’s East Hararghe Zone.

The federal forces deployed in the area, ostensibly to end the Liyu police attack on civilians, opened fire on protesters who blocked roads. At least 15 people were killed — some on the spot — including a 10-year-old child who was “shot in the head’, and a father and a son, according to BBC Afaan Oromo.

Angered by the unrelenting and sensible killings of Oromo youth in the hands of the federal security forces, Oromia wide protests are expected in the coming days. Already, on Tuesday, protests have been reported in the flash point town of Ambo, in Wurgesa , Wuchale, at Gonder University, Bahirdar University, and Debre Tabor University, among other places.

Meanwhile, as the country reels from protests, the ruling Ethiopian People’s Revolutionary Democratic Front (EPRDF) is holding a meeting in Addis Ababa. Here is a brief analysis from OPride contributor, Hassen Hussein:

EPRDF in make-or-break meeting
Ethiopia’s top decision-making body, the 36-member Executive Committee of EPRDF, is on a make-or-break meeting. The dominant party in the coalition, the Tigrayan People’s Liberation Front (TPLF), fresh out of a two-month long meeting, is reportedly pushing for more stern action against fresh protests. Moreover, they are blaming the protests and unrests on its coalition partners, mainly the Oromo Peoples’ Democratic Organization (OPDO) and to some extent the Amhara National Democratic Movement (ANDM).

Reports indicate that TPLF is still hell-bent on repressing its way out of the crises. Protesters complain that TPLF’s mantra about “law and order” when the cause of the crises is its position above the law will further destabilize the country. Across the table from TPLF’s top 9 leaders sit OPDO’s 9 executives. The latter have built momentum towards charting a course away from violent repression. Frustrated by lack of concessions from TPLF, there are reports that OPDO has walked out of the meeting followed by ANDM.

OPDO and ANDM ought not fall for TPLF’s empty bluster and stand their ground. And both ANDM and OPDO must realize that allowing continuing TPLF’s hegemony is the greatest security threat facing Ethiopia and that further state-sanctioned violence would create more problems than its solves. The two should call for a wholesale removal of the TPLF-dominated regime and demand it’s replacement by an OPDO-led transition to avert a catastrophic slide towards total chaos. TPLF’s insistence on reimposing martial law would simply make Ethiopia look like Syria of last 5 years and should be avoided by all means.

Political uncertainty in #Ethiopia amid fresh #OromoProtests in Oromia