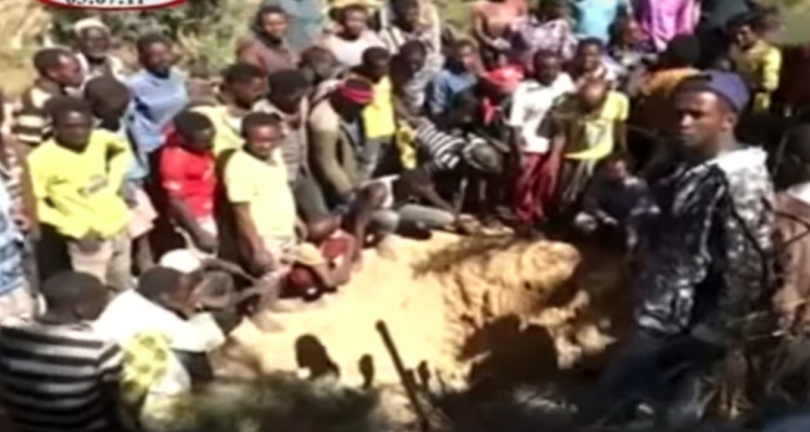 Among those killed five were members of the same family, according to a report by BBC Afaan Oromo.   Sali Hasan Ibro and Abdi Sali are father and son, two brothers Mika’el Abdi Hasan and Tofiq Abdi Hasan as well as Abdalla Iisa all hail from the same family.

A member of the victim’s family, Abdusalam Abadir Hasan, told BBC that Abdi Sali and Tofiq Abdi were in their 20s, Mika’el Abdi is a 15-year-old youth, whereas Salii Hasan Ibro and Abdalla Iisa were elders in their 50s and 60s.

The deceased were assisting a community member on a farm, cutting sorghum about 6kms from the town of Chelenqo, in a place called Ija Dhera, according to Abdusalam.

“When the army arrived, the youth who blocked roads had called each other on the phone and already escaped; the soldiers mowed down the victims with bullets while they were still in the farm resting from the labor,” he said.

Abdusalam says the deceased had no idea that the army had chased away the youth and no clue about what was happening in the town.

“Since their place of residence and the farms were far apart, we went with the assumption that those who left to work their farms were safe and alive. But when we got there, none were alive, they had fallen in the very spot where they were gunned down,” he said.

Killing our relatives wasn’t all they did. The army brought in military trucks and heavy machinery to prevent us from burying the deceased where we planned to bury them. Instead, the soldiers told us to bury the victims at a different place, he said.

He recounts that there was a big problem the day of the burial as well.

In an interview with the state-run Oromia Broadcasting Network, Lemma Megersa, president of the Oromia Regional State, stated that the national defense force that committed this killing in Chelenqo did so without the knowledge of the Oromia government.

He categorically condemned the killings and announced that those who committed the indiscriminate killing will be held accountable under the law and that an investigative committee formed by his office has already commenced its work.

The immediate trigger for the killings was an earlier event in the nearby Serkema village, Meta District, where the notorious Somali Liyu Police killed a prominent member of the community, provoking outrage in the local youth which descended into spontaneous protests.

However, those killed in the ensuing crackdown had no involvement whatsoever with the protests. “These are people who had no idea about politics; nobody has come to talk to us or tell us why they were killed; what authority is there to express our grievances to? We just have to cry to the almighty and seek his solace and give each other comfort,” said Abdusalam.

(This is a word-for-word translation of BBC Afaan Oromoo report by Hassan Hussein. We added qualifiers in few instances for clarity.)