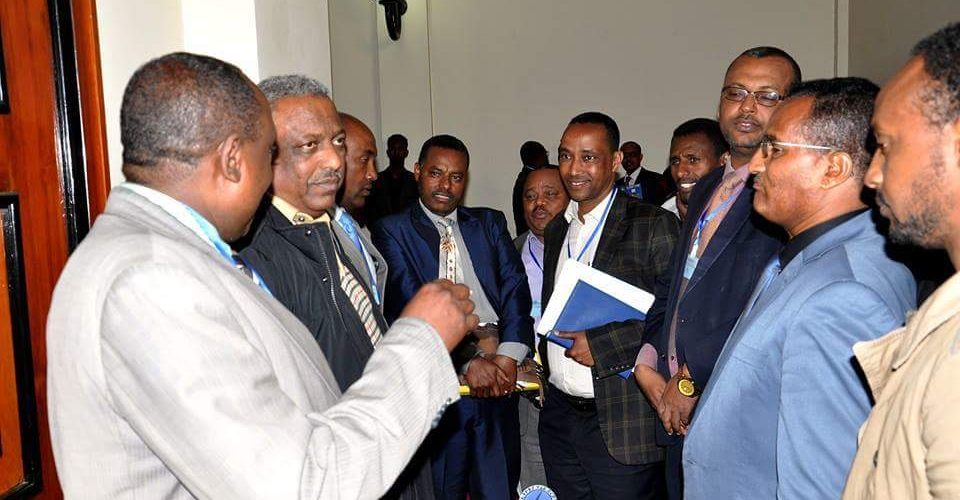 (OPride) — For nearly 26 years, the Ethiopian parliament unanimously rubber stamped diktats from the executive branch despite a clear separation of power between the two branches of government. Since 2005, the last time a serious opposition party was in the 547-seat chamber, the legislature has lost any vitality. Even the sporadic protestations by opposition MPs — most notably from Merera Gudina, Bulcha Demeksa and Beyene Petros — are long gone.

A former MP, who has fled to Norway, once spoke of how he envied opposition lawmakers, who had at least the right to talk—a right he was never allowed to exercise as a member of the ruling party.

But the winds of change seem to have finally reached the halls of the Ethiopian parliament. Introducing a monkey wrench to an already complicated and cutthroat power struggle, on Thursday, MPs from Amhara and Oromia regions, who together represent more than 60 percent of the country’s population, announced a boycott of the regular sessions of parliament. They are demanding Prime Minister Hailemariam Desalegn to stand before them and explain the reasons behind ongoing deadly violence across the country.

“We have resolved not to resume work unless the Prime Minister talks to us,” Neima Ahmed Yusuf, a Oromo MP who represents the Mieso district in the violence-affected West Hararghe Zone of Oromia, told the Voice of America on Thursday. “We are here representing the Oromo people and our people are being subjected to daily indignities: loss of life, destruction of properties and more than half a million have already been displaced. Mothers are giving birth on the streets; the sick are dying on the streets without any care.”

She added: “I represent my party but ultimately we all are here representing the Ethiopian people. I am certain that the plight of the Ethiopian people is a matter of concern for all my colleagues in parliament. In this regard, it is not just the OPDO and ANDM MPs who are demanding answers for the deepening security crisis. All EPRDF members, including TPLF representatives, are asking the prime minister to come and give us explanation on why this is happening. However, while the other MPs will continue working, as OPDO — since we are the ones receiving these daily reports—we opted to stop working until an agreement is reached on this matter. We simply don’t have the conscience to engage in regular, day-to-day activities of parliament on the face of mounting daily reports of civilian death and displacement.”

The boycott was not entirely surprising. The signs were there all along. Amhara and Oromo youth have staged popular protests since 2014 against what they say is political and economic marginalization. In early September, Abadula Gemeda, who served as the Speaker of the House since 2010, resigned from his post, citing disrespect to his party and Oromo constituency.

A few weeks later, the Prime Minister’s speech to lawmakers where he defended his party’s annual agenda saw a remarkably low attendance. Last month, in another unprecedented feat, the EPRDF-controlled House of People’s Representatives barely reached a quorum.

The latest parliamentary boycott, also unparalleled in Ethiopia’s history, is part of a growing tremor that is ripping apart the ruling Ethiopian People’s Revolutionary Democratic Front coalition (EPRDF). It comes after months of deadly clashes between Oromia and Somali regional states, where more than 70 people were killed in the last week alone.

The dramatic protest by Oromo and Amhara MPs underscore the depth of rejection facing those wielding real power in Ethiopia. It also marks the deepening of the now-public power struggle and infighting within the EPRDF Executive Committee. On Dec. 20, the party’s top-36 leaders, who make the Executive Committee, meeting since last week, issued a terse statement that gave little clues about where it is leading the country.

The dominant Tigrayan People’s Liberation Front (TPLF), fresh off six-weeks-long self-evaluations known as gimgema, which saw top leadership changes, went into the EPRDF meeting on the offensive. Its one-time unquestioned supremacy is facing growing threats from the resurgent Oromo Peoples’ Democratic Organization (OPDO), a junior partner in the ethnic-based EPRDF coalition, and the latter’s growing alliance with the Amhara National Democratic Movement (ANDM).

TPLF’s aggressive posture might have paid off: The EPRDF statement had the handprints of the former’s own statement from the end of November written all over it.

The gathering was preceded by panicked whispers from Tigrayan bloggers and activists that this was a do-or-die moment for TPLF. The meeting opened with an awkward motion from OPDO’s most senior official and one of the founders of EPRDF, Abadula, whose abrupt resignation in September sent shockwaves throughout the colossal system.

Abadula’s motion, which was reportedly endorsed by ANDM, cut right into the heart of what OPDO sees as the key malaise ailing the country: Tigrayan cronyism and its domination of the country’s politics, economy, military, and intelligence sectors.

However, a week into the meeting, EPRDF leaders remain locked in a bitter power struggle only made worse by deepening political and ethnic tensions across the country. Popular grievances that stoked three years of protests in Oromia and later in the Amhara region are still unaddressed. 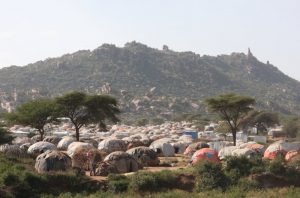 The country is grappling with the worst internal displacement of people in its history. Nearly 700,000 Oromos and a sizable number of ethnic Somalis have been displaced over the past year by a TPLF-enabled cross-border raid by the Ethiopian Somali state’s paramilitary force, the notorious Liyu Police. Charges of collusion between the latter and the top brass of the national army and intelligence services have taken the mistrust between the members of the EPRDF coalition to new and dangerous heights.

In its rumbling Dec. 21 statement, EPRDF acknowledged a growing schism, mistrust, and suspicion among its member organizations. It also admitted that the party’s much-advertised deep renewal, launched last year in response to popular protests, were not deep enough after all.

The self-criticism echoes similar statements made last month by TPLF during its own internal self-evaluations. Nonetheless, the rare admission underscores the fact that all is not well in Ethiopia despite a veneer of calm.

The governing coalition’s statement parked the problems ailing the county on the doors of the EPRDF executive committee. It wasn’t clear if the final outcome will include a leadership shakeup at the top of the party’s hierarchy.

EPRDF to become a single national party by 2020

The issue of naming a capable and transformative leadership team to steer the country into calmer waters has dogged the party since the death in 2012 of its erstwhile leader, the late Meles Zenawi. 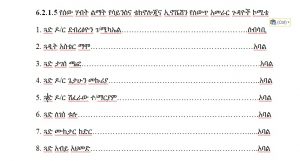 The committee, tasked with choosing the next “transformative” leadership of EPRDF and its member organizations, was comprised of Aster Mamo, Muktar Kadir, Abiy Ahmed, Getahun Mekuria, Tagesse Chafo, Leggese Tullu, and Shiferaw Teklemariam.

It is ironic that two OPDO leaders—Muktar and Aster—who were pushed aside by the waves of popular unrest in Oromia were included in a committee set up to choose a leadership that will oversee human resource development, scientific and technological innovation, and transformational change.  Nonetheless, the number of Oromo participants in the committee suggests that EPRDF might have intended to install a Oromo prime minister at its upcoming congress, slated for March 2018, or have one with strong Oromo endorsement.

That the committee is chaired by the roguish chairman of the most powerful EPRDF member organization implies that whoever ascends to the premiership will be constrained by the status quo and will be amenable to being puppet-mastered by the Tigrean aristocracy—a repeat of the current arrangement where Hailemariam is the titular head of the party and government whereas real power is wielded by his princely Tigrean subordinates in the political, military, and intelligence services.

However, given the souring of relations between OPDO and TPLF, it is unthinkable for the latter to put its backing behind a prime minister from OPDO—even a nominal one. And no Oromo would opt for another Tigrean premier, let alone someone as controversial as Debretsion. Regardless, a leadership shakeup could still be in the cards.

In fact, a change in the top leadership of the governing coalition, which may include the removal of Hailemariam and his deputy Demeke Mekonnen of ANDM, and the head of the EPRDF Secretariat, Shiferaw Shigute, who like Hailemariam represents the Southern Ethiopian People’s Democratic Movement (SEPDM), is one of the possible outcomes expected from the EPRDF meeting. In addition, the possibility of merging the four-EPRDF member organizations into a single national party has been floated at the meeting, according to insiders.

However, this is not a new agenda. According to recently leaked documents viewed by OPride, the plan was discussed at the last EPRDF congress but tabled for further discussion at the upcoming congress in March. Unless the current political crises force their hands, the actual merger was supposed to be finalized in 2020—perhaps before the next national election (March 2020) or after it (August 2020).

The vague EPRDF statement was short on details but it is entirely possible that all sides could go out of this meeting saying their problem definition and vision prevailed—hence the continuation of the status quo.

Without a drastic shift in direction, the party is bound to face more turbulent winds ahead. Since the will to survive is as relevant to individuals as organizations, it is difficult to envisage that EPRDF would take the suicidal course of rejecting the reform agenda championed by Lemma Megersa and the OPDO’s youthful and energetic leadership.

Similarly, it is difficult to conceive that TPLF and its most loyal partner, Hailemariam’s SEPDC, will allow a program of change that would diminish their undue and undeserved influence that has ran the country aground. Likewise, if the new OPDO-ANDM alliance holds with minimal defections from their ranks, it is difficult to imagine how a cross-sectional governing majority could be cobbled together to avert the risk of civil war that is becoming more and more probable every passing day. That means the current executive leadership will stay on as a placeholder as differences are worked out behind closed doors. In short, the impasse within EPRDF could very much continue to resemble that of the country.