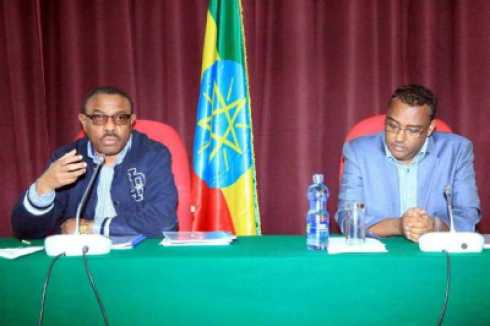 (OPride)—After a day of journalistic mishaps and mistranslations in both local and international press, we have some clarity on what exactly Ethiopian leaders said and did not say during Wednesday’s surprise announcement.

In a much-anticipated press conference, the four chairpersons of the ruling Ethiopian People’s Revolutionary Democratic Front (EPRDF) briefed journalists from the state media on what agreements they reached at the nearly three weeks long closed session of the party’s Executive Committee. The meeting, held amid heightened political tensions across the country, turned into a big media speculation storm.

Initial reports suggested that the Prime Minister used Wednesday’s presser to announce the unconditional releases of every single political prisoner in Ethiopia and plans to close the infamous Maekelawi prison. The report caught Ethiopia observers (and no doubt many Ethiopians) off guard.

The international press went with glowing but as we now know mistranslated sound bites and most of the world went to bed believing repressive Ethiopia had taken an unprecedented step forward in expanding human rights and political freedoms for its citizens. In fact, U.S. House Foreign Affairs Committee Chairman Ed Royce issued a statement lauding Ethiopia for “finally acknowledg[ing] that it holds political prisoners.” The Republican lawmaker called on Ethiopia to “quickly follow through on its commitments to release them and close a prison camp notorious for torture.” The Ethiopian government adamantly denies holding any political prisoners in its jails.

Ethiopians on social media were much more skeptical. Many were quick to note it’s too good to be true.

Twenty-four hours later, a different picture is emerging from a closer review of the prime minister’s actual comments and a thorough parsing by Ethiopian journalists, social media activists, and netizens.

To be sure, much remains unclear but here is what I know to be factual:

First, the unconditional release of all those unjustly incarcerated at several detention facilities across the country doesn’t appear to be on the cards. However, all indications are that a number of high-profile political prisoners will be released or pardoned on or ahead of the Ethiopian Orthodox Christmas, which will be on January 7, 2018.

Second, the Maekelawi federal prison, widely known as a torture chamber for dissidents and government opponents, will be closed and turned into a museum. A new detention center will be built instead, a signal that Maekelawi’s closure doesn’t necessarily mean the end of torture and inhuman treatment for detainees as long as the legal system and its oppressive structures remain intact.

So what went wrong?

The big news was first reported, among others, by Associated Press and BBC claiming the ruling party had made a spectacular 180 degree turn to release all political prisoners. It appears that AP’s Elias Meseret was among the first to translate parts of the briefing from Amharic and spread the breathtaking declaration. AP’s wire copy was then picked up by the Guardian and many other western media outlets. Rights groups jumped on the report as well with Amnesty International suggesting the decision to free all political prisoners is a sign of “the end of an era of bloody repression in Ethiopia.”

After the story made the rounds, snippets recorded from the nightly broadcasts were shared by local journalists on social media. The truth, it turns out, is much more somber.

Here is a word-for-word translation of the premier’s comments followed  by AP’s version:

It is known that there are political leaders and individuals whose crimes have resulted in court convictions or have resulted in their ongoing prosecution under the country’s law. Nevertheless, to create an atmosphere of national understanding and due to our belief that we can simultaneously expand our democratic horizons, some of them will be pardoned as per the law’s of pardon and as would be constitutionally permitted. We will proceed with this action while taking precautions to ensure the rule of law is respected throughout the process, and pursue the development of our democratic and political structure that oversees our multiparty system.

Now, this is far from what most international media outlets quoted the prime minister as saying yesterday. The statement was vague and riddled with state propaganda to portray the government in Ethiopia as a well-oiled machine preparing for a brief pit stop before blazing onwards to glory. But it is a far cry from the media depiction of a regime that admitted to constitutional wrongdoings and is attempting to restart with a clean slate.

One of the first questions from Ethiopians was: What constitutes a political prisoner?

Unfortunately, this was a case of bad translation. There is no way the prime minister would refer to anyone as a “political prisoner.” To do so would be to admit that they had been unjustly detained. Instead, the premier referred to the detainees as “political leaders or individuals whose crimes have resulted in court convictions or ongoing prosecution under the law.”

Based on this statement, it will be a mistake to conclude that Ethiopia is abandoning its long-held position that it holds zero political prisoners. Similarly, Prime Minister Hailemariam Desalegn did not admit that his government used the Maekelawi prison as a torture center. He noted that the detention center will be closed because it is associated with atrocities committed by the Derg regime.

To my knowledge, at the time of publication, no outlet has issued a retraction or acknowledged that Hailemariam’s comments were misrepresented. Indeed both AP and BBC carried follow-up stories, the later quoting an aide to the prime minister who said the premier was misquoted due to “mistranslation.”

It is worth noting here that the initial Facebook on the verified “Office of the Prime Minister” page was edited at least eight times. The claim that Ethiopia had finally admitted holding political prisoners may have born out of the vague and contradictory Facebook postings by the PM’s official page and similar quotes by the state-run Ethiopian Broadcasting Corporation, which also edited its initial Facebook post several times.

The posts may have led some to believe that Addis Ababa had finally given in and admitted what everyone else knew to be true. But, as I explained above, this simply isn’t the case.

The Ethiopian Reporter on Thursday reported the pardoned prisoners could be released as soon as Friday or Saturday. The report does not answer the questions many are asking on who might be released, but implied that leaders of the opposition Oromo Federalist Congress, namely Bekele Gerba and Merera Gudina, are likely to be included in any releases.

Meanwhile, the African Union also issued a rare statement reacting to domestic political developments in Ethiopia. In a communiqué shared online, AU Chairman Moussa Faki Mahamat welcomed the “pardoning or suspending of ongoing judicial cases of members of political parties and other individuals.”

The language in AU’s statement, which mirrors Hailemariam’s comments, suggests AU was either notified or took extra steps to understand the claims. The AU leader’s message did not include a congratulatory message celebrating the releases of “all” political prisoners.

EBC has released an extended hour-long segment it said was part I of the briefing. It is likely to offer more clues and information on possible next steps. Unfortunately, given the mainstream media’s fleeting interest, much of it may get lost in the whirlwind of misinformation that was based on the incorrect translation. And the tens of thousands jailed merely because of their political views and activities may still languish in Ethiopia’s many torture chambers.

My name is  Zecharias Zelalem.