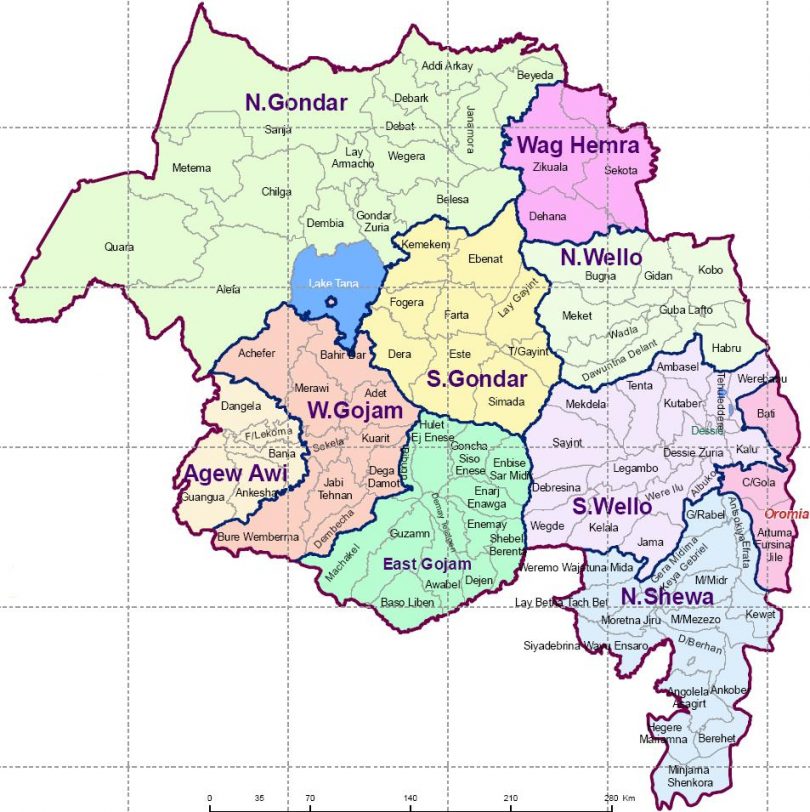 (OPride) —Security forces in Ethiopia shot dead up to 20 unarmed civilians in yet another week of crackdown on protesters in the Amhara Regional State. The towns of Kobo and Mersa in the Wollo zone were hit hard by the latest state-sanctioned violence. Reports indicate the region is under military siege.

The headlines could have been copy-pasted from 2016: Popular protests met with an excessive and violent response from federal security forces. After months of relative calm and ample time to dissect the root causes of the protests, Ethiopia’s federal forces appear as unprepared as they were in 2016 to deal with the spontaneous flare-up of unrest. Despite calls for investigation and promises by Ethiopia’s leaders to correct course, lethal force remains the preferred tool to control crowd and the default answer to citizens who oppose the status quo.

Kobo, a small town some 560 kilometers north of the capital Addis Ababa, is located in Amhara State’s North Wollo zone. It has an estimated population of 50,000 people. The protests in Kobo began on January 22. The immediate trigger was the killings of nearly a dozen festival goers two days earlier during Timket celebrations in the nearby Woldia town.

The protests in Kobo were mostly peaceful but eventually turned into riots in some places. On Jan. 24, protesters damaged public property, including the Kobo City Administration office, and torched 15 government vehicles, according to one resident who spoke to the Voice of America. Businesses belonging to ethnic Tigrayans were also reportedly targeted. Gezay Gebreyesus, a local Tigrayan businessman, claimed he lost his home and business in the arson attacks.

Ethnic Tigrayans in the ruling Ethiopian People’s Revolutionary Democratic Front (EPRDF) control much of the country’s economy, military and security sectors. This total monopoly of power by a single ethnic group means Tigrayan civilians are often seen as enablers and benefactors of the repressive regime. Ethnic Amharas and others resent what they say is undue Tigrayan domination of the country. It is also why Tigrayan businesses were singled out by arsonists in Kobo.

The state-affiliated Fana Broadcasting Corporation (FBC) reported that three people, including a police officer, had died on Wednesday. Eyewitness accounts put the death toll between seven and ten. The FBC report also stated that the situation was quickly brought under control and that local elders and religious leaders were holding consultations with the protesters to prevent future outbreaks of violence.

But, on Thursday, locals said troops were going door to door across Kobo town and have detained more than 200 people. Officials say those arrested were rioters who threw stones or took part in the damaging of property. However, it became immediately clear that the massive manhunt targeted activists known for their vocal opposition to the regime. Kobo resident Sisay Aweraris, a government critic and former member of the opposition Blue Party, was among those detained on Thursday. He reportedly did not even participate in the protests. No official word yet on whether the detainees will be charged or held indefinitely.

Meanwhile, a 37-second video clip from Kobo shows a stream of soldiers walking down a quiet road. Twenty seconds into the video, a loud gun blast can be heard. It sounds strikingly similar to the one in a video clip of troops firing at civilians in Ambo last October. OPride identified the gun used in Ambo, where security forces killed nearly a dozen people and wounded 23 others, as AK-103 assault rifle. The audio of the gun blast from Kobo suggests, as with Ambo, it was the special forces, known as the “Agazi” forces who were deployed to the town with orders to kill.

By Friday, January 26, as a sense of calm returned to Kobo, another spontaneous protest broke out in the town of Mersa, also in the Wollo zone and some 30 kilometers south of Woldia. Residents condemned the government, denounced the recent massacres of civilians and the detentions of hundreds in Kobo. A day later, federal forces entered the town and, by all accounts, applied the same heavy-handed measures as the ones used across Wollo to clamp down the spreading uprising. Ten people are reported dead so far. Locals blamed the deaths in Mersa on the Agazi, adding the regional police was not part of the deadly operation to pacify the town. Angry residents set a police station alight and torched the homes of people accused of being regime apologists. As with Kobo, there were no reports of demonstrators fighting back with weapons. According to one eyewitness, three people were killed by a single person, the head of the Amhara region’s Habru district court. The unnamed official was killed shortly afterward in retaliation.

Since the Mersa town killings, state broadcaster EBC spared no effort to label the recent chaos in the Amhara State as coordinated “clashes” between security forces and hooligans organized or agitated by anti-state forces.

Meanwhile, Amhara State spokesperson Nigussu Tilahun has admitted to “failures on the part of the regional government.” “Leadership failures have contributed to the current crisis,” he told EBC. He also condemned those who took part in riots. It’s a far cry from a statement he released on Facebook last week vowing to bring to justice those responsible for the Woldia massacre.

Amhara State President Gedu Andargachew has made a similar statement at a press conference broadcast on EBC. The official statements suggest that, as usual, security forces who massacred unarmed civilians in Kobo and Mersa will not be held accountable despite the cold-blooded nature of their assaults. Federal officials, including Prime Minister Hailemariam Desalegn, have yet to comment on the crises in the Amhara State.

Hailemariam was busy hosting the visiting United Nations Chief, Antonio Guterres. Bullets were being fired in Mersa as the leaders sat down and smiled for cameras, but it is unlikely that the deteriorating political and security situation in Ethiopia was even brought up during the two leaders meeting. Agenda topics include the UN’s relationship with the African Union, as well as the recent breakdown of a peace treaty between warring factors in neighboring South Sudan.

In a statement last week, UNHCR spokeswoman Ravina Shamdasani said, “we are extremely concerned by the use of force by security officials against worshippers celebrating the Ethiopian Orthodox festival” referring to the  Woldia massacre. She called for “prompt, independent, impartial and effective investigation to ensure those responsible for any violations are held accountable.” Unfortunately, the government in Ethiopia has repeatedly refused to heed such calls and it is unlikely that anyone will be held to account for the deaths of at least 20 people in the Amhara region over the past two weeks.

It is also unlikely that this would be the last uprising roiling the increasingly restive Amhara State. For one, the protesters’ overarching demands for civil liberties and democratic rights remain unaddressed. One hopes that regional Amhara leaders will take cues from Oromia, the epicenter of anti-government protests since 2014, and ask trigger-happy federal forces to withdraw and work to improve police-community relations at the local level.