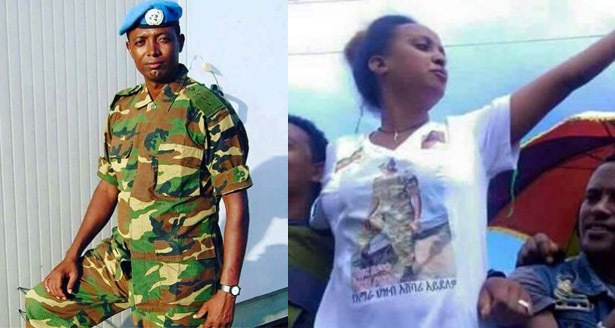 (OPride) —The news of their freedom was overshadowed by sudden resignation of Prime Minister Hailemariam Desalegn, but Colonel Demeke Zewdu, the leader of Welkait Identity and Self-Determination Committee, and Nigist Yirga, an activist and protest leader from Gonder, were released from prison.

They walked free into the warm embraces of family and supporters earlier this week. The duo spent nearly two years behind bars for their activism and had become among the most well-known prisoners of conscience detained fighting for Amhara rights. Col. Demeke was released from a detention facility in Gonder on Monday. Nigist walked from the next evening. Ethiopia’s latest round of state of emergency, which bans mass gatherings of any kind, is a week old. But this didn’t prevent tens of thousands from converging on the prison to welcome Col. Demeke and celebrate his release.

“I give thanks to the Lord,” he said in an address televised by the state Amhara Mass Media Agency. “I’d like to give thanks to the Amhara people, especially the people of Gonder, who stood up for me during my trials and tribulations. Some even paid with their lives. To their families and loved ones, I wish them strength. I’m very thankful and proud of this people.”

The freedom of Col. Demeke and Nigist are the latest in a series of political prisoner releases by the government in Ethiopia, which says the plan will create national understanding, dialogue and expand democracy. More than 6,000 prisoners have been released since January. The release of the two Amhara protests icons is the first clemency granted to high-profile political detainees since Hailemariam’s unexpected resignation on February 15.

Col. Demeke’s arrest on July 12, 2016, sparked widespread protests across the Amhara state. The outrage over the arrest of a citizen who fought for the disputed Welkait territorial issue saw hundreds of thousands of people take to the streets in the following weeks and months including a massive rally two weeks later in Gonder. At that rally, people called for Col. Demeke’s release and expressed solidarity with the Oromo protest movement happening simultaneously on the other side of the country. At that rally, among the very vocal, exuberant activists leading the protesters and shouting slogans into a megaphone was a then-unknown, 24-year-old Nigist. An image of her, clad in a white t-shirt bearing the photo of Col. Demeke read: “The Amhara people are not terrorists.” It went viral on social media. It is also led to her being singled out for arrest.

In anticipation of Col. Demeke’s impending release, thousands waited outside the prison in Gonder with excitement, eager to catch a glimpse of the man that has been lauded as a hero of the Amhara. Col. Demeke, a former member of the army who also served as a U.N. peacekeeper in South Sudan, was all smiles as he walked out of the prison compound, waving at the waiting crowd. Free to mingle, he was hoisted on someone’s shoulders as the crowd cheered and the women ululated.

On Feb. 20, Addis Gazeta published images of hundreds of people queuing outside Col. Demeke’s home in Gonder to visit him and convey their best wishes. Like many of the high-profile political prisoners released in recent weeks, Col. Demeke has already expressed a desire to continue the struggle, saying that the Welkait issue hasn’t been resolved. 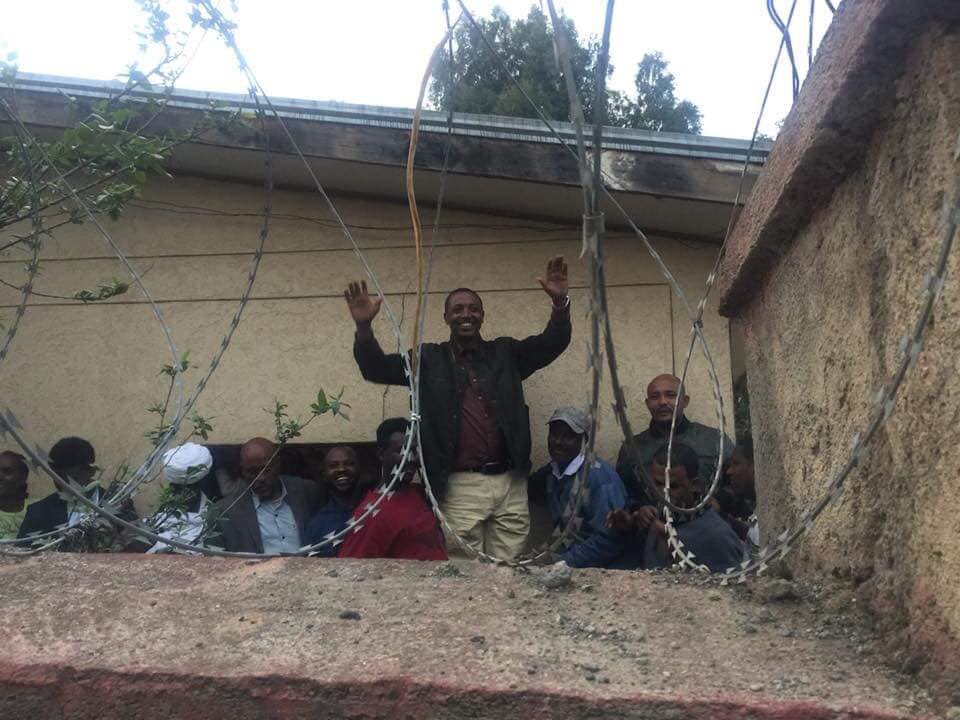 “No, the Welkait issue has not been resolved,” he said in a phone call with Deutsche Welle. “We used the legal channels to call on the government to hear our complaints. We are yet to get a committed response from the government. The people of Welkait have asked a question that pertains to their identity as Amharas.”

“The release of political prisoners is welcome. There are many more behind bars and their releases are also required before we can declare that issue solved. But there are many other issues.” 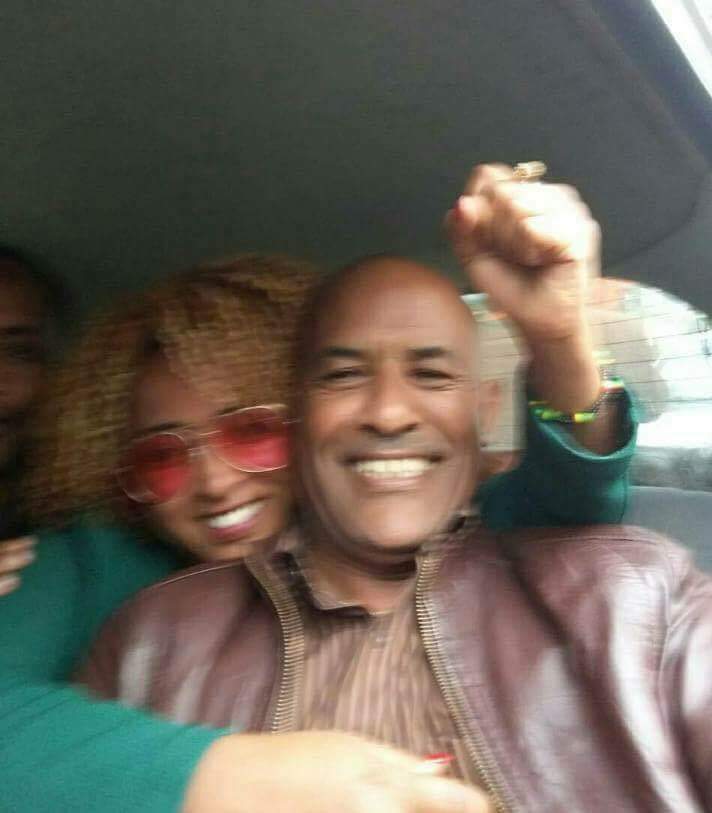 The first image of a freed Nigist Yirga (Social Media)

Nigist, who was released from the Kilinto prison in Addis Ababa, was overcome with emotions upon being reunited with family and friends. She spoke with the VOA Amharic’s Tsion Girma and thanked the Ethiopian people for campaigning to free her. But like the Col. Demeke, she called for the release of those she left behind.

“There are plenty of unjustly incarcerated prisoners. I refused to be freed while they remain in prison. They had to force me out,” Nigist said.

When asked about the reasons and circumstances surrounding her arrest and trial, Nigist said “All I said was that it wasn’t a crime to be Amhara. I have committed no crime. I have done no wrong.”

Who owns the Welkait region?

The Welkait question ignited the Amhara protest movement in 2016. The long-running dispute is over the appropriation of the Welkait Tegede region into the state of Tigray in 1995. Many Amharas believe that the Welkait area, which was historically part of the former Begemider or Gonder province, is an ancestral Amhara territory. They view the incorporation into Tigray as an annexation of their ancestral land. Despite demands by the Amhara, the government failed to conduct a referendum or create consensus around the issue. In fact, the government considers the Welkait question long settled. It was an attempt to bring the issue back into the public that landed Col. Demeke in the crosshairs of repressive state.

Prior to his arrest, Col. Demeke was leader the Welkait Identity and Self-Determination Committee, a legally- registered Amhara organization that opposes the 1995 decision and lobbies the government for favorable resolution. In 2016, after his efforts to restart dialogue authorities were rebuffed, Col. Demeke took to the media to air his frustrations.

“Our committee is demanding the reversal of the decision to place Welkait in the Tigray Region,” he told the VOA’s Tigrigna language service. “Under the Tigray Region administration, the (Welkait) people didn’t gain any benefits. Land has been taken away from them and they don’t have socio-economic advantages. The society feels like it is regarded as second-class citizens.”

Weeks after making these comments, he was arrested. 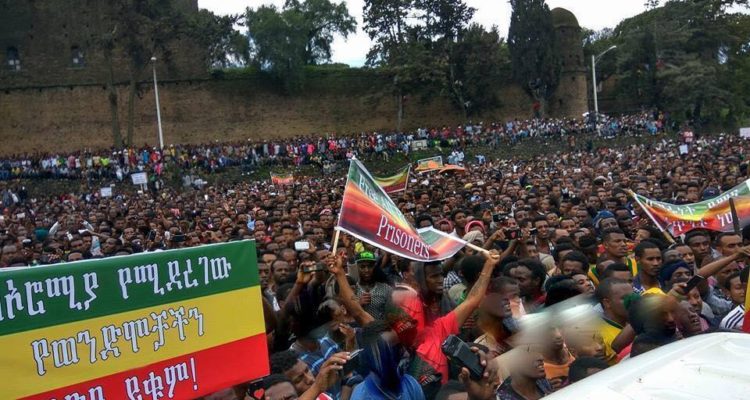 News of Col. Demeke’s arrest emboldened the Amhara protesters and the uprising quickly expanded from Gonder to Bahir Dar, and to other areas both rural and urban. At every demonstration, protesters carried images of Col. Demeke, as well as those of other imprisoned opposition politicians. They chanted anti-regime slogans and called for Welkait to be officially declared an Amhara territory. The Ethiopian army launched a crackdown to quell the protest activity. Subsequent protests were targeted by armed troops who fired live ammunition at peaceful protesters and killed hundreds of people in a few months. One such operation, on Aug. 6, 2016, to squash protests in Bahir Dar led to the death of 30 people. Nigist, life endangered, went into hiding in the North Gonder countryside, but was captured in September and taken to the Qilinto prison in Addis Ababa.

Both Col. Demeke and Nigist were charged with terrorism related offences, including aiding banned Eritrea-based group, Ginbot 7. Nigist’s plight behind bars was documented in a video by the Ethiopian Humans Right Project. She was severely tortured in an attempt to extract a confession from her. Both pleaded innocent and were released prior to a final court decision in their cases.

Despite the protests and ongoing public demands, the government has never formally responded to requests to settle the Welkait issue. For now, as the talk of Hailemariam’s replacement and the six-month emergency decree take center stage, Welkait question appears very much off the agenda. Col. Demeke appears unmoved by this.

“I have no other plans,” he told DW of his post-prison life. “The Welkait identity issue is still my main concern. I will continue my work as leader [the Welkait Identity and Self-Determination Committee.]”