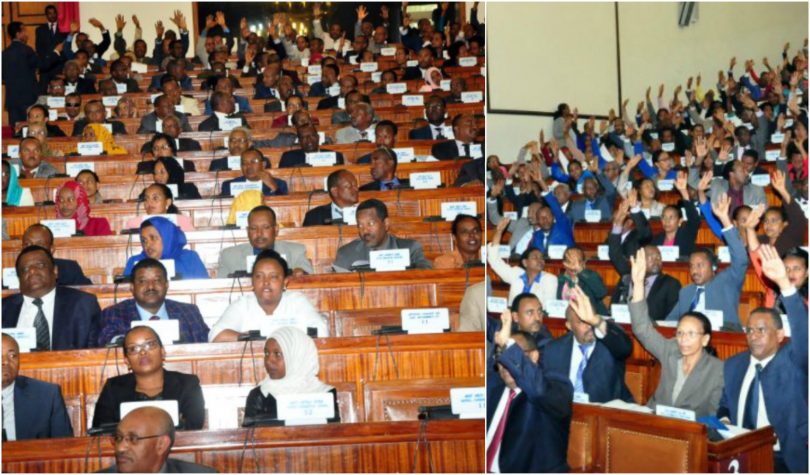 (OPride) — The Speaker of Ethiopia’s one-party parliament, Abba Dula Gamada, is accused of altering the number of parliamentarians present to approve a highly controversial six-month long state of emergency and the final vote tally from the session.

The emergency law was decreed by the Council of Ministers on February 17 while lawmakers were on recess. The Constitution requires the House of Peoples’ Representatives to vote on the decree within 15 days of its declaration. Parliamentarians were called back from recess earlier this week to meet the March 4th deadline.

The disputed vote came two days after federal authorities ordered security forces to “take all the necessary measures” to quell growing protests in the Oromia state. True to form, over the weekend, security forces shot and killed at least five civilians cross western Oromia, including a 5th-grade student in Mandi and a father of ten in Guder. More than 15 people, including two members of Oromia police, were wounded. Among other places, road closures reported in Gimbi, Najo, Boji Birmaji, Ambo, Gudar, Begi and Holota towns.

Here is what happened

Long known for rubber-stamping official diktats from the executive branch despite a clear separation of powers, the legislature has shown flashes of independence in recent months. Friday’s critical vote was preceded by a coordinated campaign whereby Oromo activists posted dozens of MPs phone numbers online, urging constituents to call and demand that lawmakers reject the draconian measure.

The latest state of emergency, the second since October 2016, was expected to be highly contested, with strong opposition coming from representatives from Amhara and Oromia Regional states.

Here is how the MPs voted: 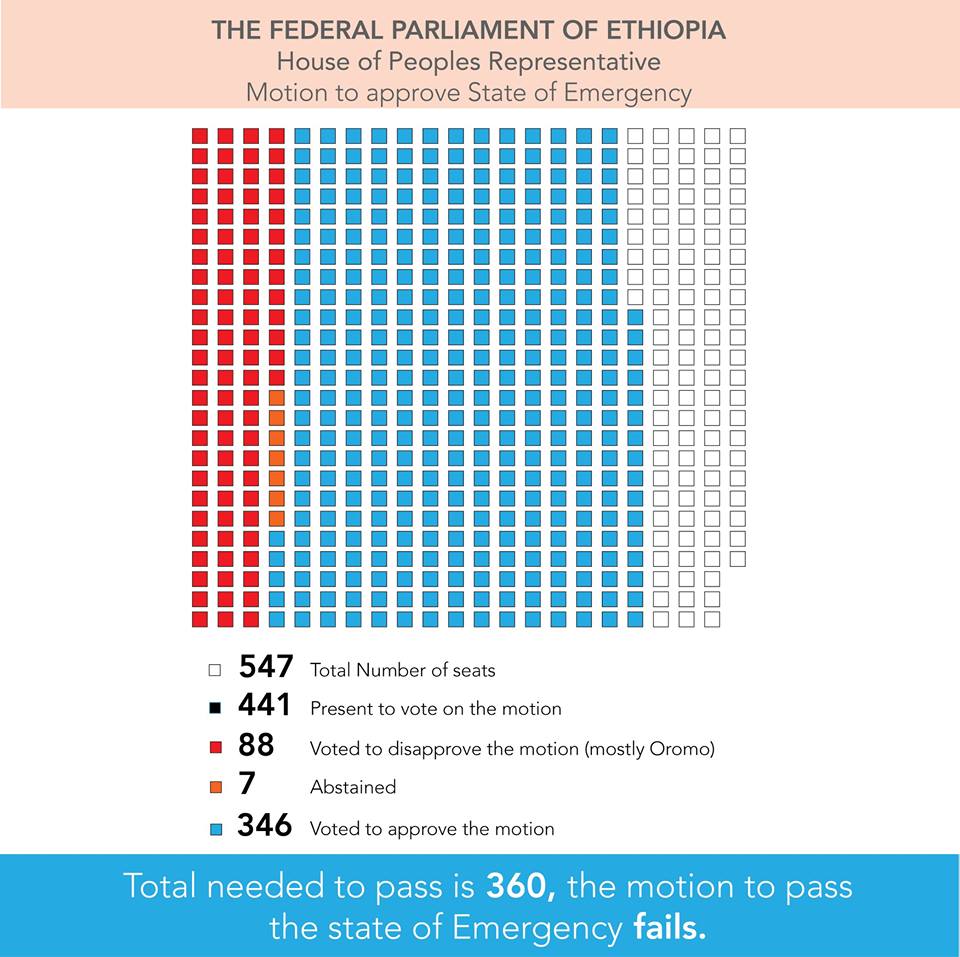 In the original audio and video clips sent to OPride as the voting ended, the Speaker of the House Abba Dula provided an even lower number but stated on the record that the measure passed with a two-thirds majority of “339 votes” — after reading out the constitutional mandate.

The constitution is unambiguous on setting a higher bar for declaring a state of emergency. “The decree, if not approved by a two-thirds majority vote of MEMBERS of the House of Peoples’ Representatives, shall be repealed forthwith,” per the Constitution’s Article 93(2)(a). A few government sympathizers and Tigrayan bloggers have pointed to little known House of Peoples’ Representatives Working Procedures and Code of Conduct to justify today’s illegal parliamentary maneuver.

However, as legal scholar Awol Allo points out, a code of conduct “is not a law and does not have the force of a legislation, and certainly cannot be used to undercut the Constitution. It does not have the standing of an act of parliament. Even if we grant it the same status as a proclamation for the sake of an argument, a proclamation cannot modify, alter, amend, or supersede the Constitution.”

Shortly after the vote, as confusion spread in and outside the chamber, authorities went into full damage control mode, editing the official Parliament Facebook page and calling and intimidating reporters not to use the actual numbers — 441 attendance and the 346 votes in favor — in their reports. To cover up the Speaker’s botched announcement and justify the usurpation of power, they concocted a non-existent figure.

The state-affiliated Fana Broadcasting Corporate was the first to edit its original report: Reverting to the fictitious figure provided by the Speaker’s office. It updated its report — without issuing a correction or providing an explanation —to say 490 MPs were present, 395 voted in favor. The Ethiopian Reporter similarly edited its initial report. Reuters’ Aaron Maasho also reported the cooked numbers—also without qualifying or attributing to a single source —while AFP journalist Chris Stein used the real tally provided by the Speaker of the House.


The bottom line and the backdrop

It is now clear that the latest state of emergency did not garner the parliamentary votes needed for implementation. It is illegal and unconstitutional. And it should be repealed.

But Ethiopia is a police state not a nation of just laws or even an illiberal democracy with a semblance of checks and balances. The ruling Ethiopian Peoples’ Revolutionary Democratic Front (EPRDF), in power since 1991, claimed winning 100 percent of the seats in the last election. The parliament is full of the same corrupt officials who have robbed the country’s resources and continue to dominate decision-making. In the short run, as tensions mount across Oromia amid calls for stay-at-home strikes, it is unlikely that the unconstitutional decree will be repealed.

More than the theatre and the debate over numbers though, Friday’s parliamentary vote revealed something more serious: The deep and deepening schism within the ruling party and the ever-growing risk of state collapse.

Let us be clear: EPRDF is stuck and its coalition partners are deadlocked on the way forward. In that context, the contest over the emergency decree is but one of the many sinister games being concocted as various centers of power jostle to replace outgoing Prime Minister Hailemariam Desalegn, who in a shocking announcement on Feb. 15, handed in his resignation.

There are three front-runners as the succession struggle heats up. One is Demeke Mekonnen, the current deputy PM and chairman of the Amhara National Democratic Movement (ANDM). The second candidate, reportedly the favorite of the dominant Tigrayan People’s Liberation Front (TPLF), is Shiferaw Shigute, who earlier last month replaced Hailemariam as chairman of Southern Ethiopian People’s Democratic Movement (SEPDM). The two will face off against Dr. Abiy Ahmed, the newly minted chairman of Oromo Peoples’ Democratic Organization (OPDO). (ANDM, OPDO, SEPDM and TPLF makeup the hodgepodge EPRDF coalition.)

The jostling for control and subtle campaigns are unusual and visible but don’t expect a fair and transparent election. In theory, the next leader will be chosen by the 180-member EPRDF Council, made up of 45 members each from the four coalition partners. In reality, the candidate that TPLF’s 45 members vote for will eventually be coronated. TPLF is widely expected to sit out the contest. However, on Sunday, citing unnamed sources, a local newspaper reported all the four chairmen of EPRDF parties are in the running for the office of the prime minister. This adds Debretsion Gebremichael to the mix. The scandal-tainted TPLF chief and former deputy PM is one of the hardliners fighting to restore the party’s one-time unquestioned hegemony.

Where do the candidates stand?

Of the four party bosses, Debretsion has the least chance of becoming prime minister. In fact, his elevation would not only be blatantly tone-deaf but it would pose an existential threat to the country’s future that is no less dire than an outright military coup.

Demeke is loathed even within his own party and among the Amhara people. He was widely expected to lose his chairmanship when the party’s central committee met last month. But he somehow survived and promises of the premiership by the TPLF may have a lot to do with it. He is part of the executive leadership that was blamed for incompetence and dereliction of duty. Along with Hailemariam, he took responsibility for the current crisis facing the country. He has been a cabinet minister since 2008. Simply put: As the party promises deep reform, Demeke is not a change agent or a reformist by any stretch of the imagination.

Shiferaw is the head of the EPRDF Secretariat. Under his watch, the ruling party nearly splintered, corruption, brinkmanship and TPLF’s factionalism run rampant and the former is now on the verge of disbanding. Hailemariam, whose six-year tenure was rocked by endless crises, is Shiferaw’s comrade and until last month SEPDM’s chair. If Shiferaw gets the top post, as it is now rumored, it would very simply be because of his loyalty to the TPLF brass and robber barons fighting to maintain the status quo. But elevating another nominal figure, with no real constituency, would make little logical or strategic sense. He lacks the charisma, oratory and gravitas to inspire confidence, gain popular legitimacy and unify the party, much less kick-starting a national reconciliation. Unlike Hailemariam, Shiferaw doesn’t enjoy the support of his own people—the Sidama, the largest of the close to 60 ethnic groups in the Southern Nations, Nationalities, and Peoples region. He has long been dogged by charges of corruption.

In the eyes of many Ethiopia watchers and the majority Oromo people, Abiy Ahmed is the clear choice to lead the country out of the current abyss. Oromia has been the epicenter of the protest movement. Over the past year, Abiy and his colleagues in the OPDO, particularly the regional president Lemma Megersa —who remains the overwhelming national favorite despite bowing out of the race—have embraced most of the protesters’ demands, thereby positioning the party as a champion of political and economic reforms.

Abiy has been accused of character flaws but he could take some of the lessons from Oromia to the federal apparatus. His elevation would also satisfy Oromo’s long quest for a political power commensurate with their size and contributions. But Abiy, who two weeks ago emerged as a clear frontrunner, has apparently drawn the ire of TPLF bosses and their military-intelligence complex. His chances now appear in jeopardy.

There are other dangers lurking ahead. First, if Friday’s dramatic “nay” vote, abstention and the strategic absence of nearly 100 MPs is any indication, the EPRDF-controlled parliament is due for yet another showdown—over who should be coronated as the country’s next leader and whether that leader would be subordinate to the country’s powerful military chief of staff and security head, both hardline Tigrayans.

Even if a TPLF candidate sails through parliament via yet another episode of vote rigging, such a candidate is likely to receive a frosty reception and will remain an ineffective lame duck until the next elections in 2020. A scenario where TPLF elbows through an unpopular dark horse, for example, an OPDO old-guard such as Abba Dula or an ambitious technocrat like Foreign Minister Workneh Gebeyehu, does not portend well for EPRDF and more importantly for Ethiopia. In fact, that may well become the last straw that breaks the camel’s back and could actually end with EPRDF’s dissolution.

Already, TPLF honchos and their cronies — facing an inevitable decline and a creeping realization of their waning influence — are said to be considering a scenario where the federation will be dissolved and key leaders of “Lemma’s OPDO,” including Abiy, which according to insiders are described by TPLF hardliners as “the party of anarchy,” will be purged or jailed. In fact, increasing assertiveness by OPDO has moved so-called TPLF moderates into the fold of hardline elements. TPLF, without any exception and internal dissent, is fully resolved to liquidate the challenge from both the reformist wing of OPDO and the youth protesters that have demanded reform since 2014. That prospect, scary to even contemplate, would end with a bloody civil war. The stakes have never been higher.