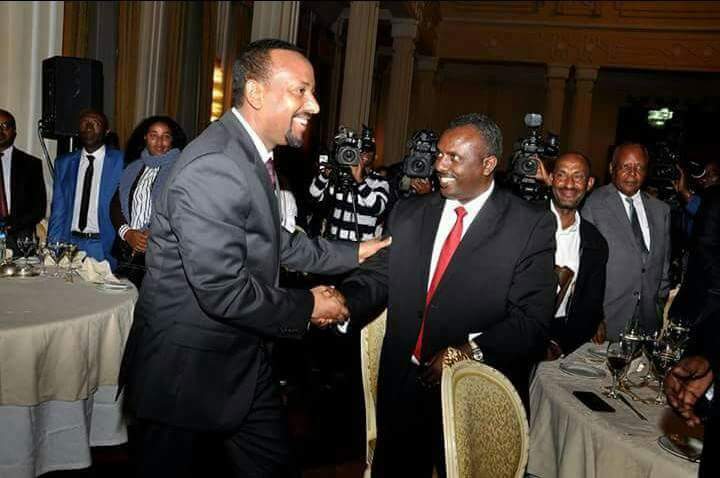 (OPride) — Ethiopia’s new Prime Minister Abiy Ahmed on Thursday hosted a dinner meeting at the Jubilee palace with leaders of opposition parties, religious leaders, prominent personalities, and representatives of civic organizations. Those in attendance included recently released leaders of the Oromo Federalist Congress party, Merera Gudina and Bekele Gerba. The attendees welcomed the gesture as a positive step in the right direction and urged the prime minister to follow through with his pledge to open up the political space. In keeping with the theme of his inaugural speech, Abiy referred to the opposition as “competing” parties.

Here is a rough translation of the prime minister’s comments as reported by the state-run EBC:

To this day, democratic culture has not developed as much as we would like in our country. Where different political viewpoints are tolerated; where equality before law is guaranteed; and where when injustice is committed, there are mechanisms for holding perpetrators to account; where human rights are respected. Where political and civic rights such as the right to be organized and freedom of assembly and the likes are respected. We need to rally together to make sure that a constitutional and democratic culture is sufficiently developed to the extent we would like. In addition, we must also resolve to work to create conducive climate where civil society groups and intellectuals have the freedom which will enable them to say their perspectives and ideas have shaped the affairs of their country.

Our party, EPRDF, has done different things to democratize the country, but both the process and outcome were lacking and not up to par with the expectation. Our actions failed to match our policies and rhetoric. As a result, it is clear that we could not go as far as we would have liked in terms of democratization. We will use this opportunity and push forward with full force and with the spirit of togetherness. We all must rally around this.

EPRDF has examined itself and identified the problems. Beyond that, it has also started the work of reform and change at all levels of its party structures. This work of change must go beyond our party and the government structure to bring about national transformation. We firmly believe the reform must reach all segments of our society. Ethiopia finds itself at a chapter where it now needs strong competing parties more than ever before. As a result, competing political parties must also make themselves ready for change. You must leave behind bitterness and polemics and start with a new spirit. EPRDF understands it needs strong competition to be a better and stronger party. Ethiopia will benefit from it. Competition makes one stronger. It encourages one to put all of one’s power to work. It helps us find new and alternative solutions and ideas. With this understanding, we will work day and night to create a conducive political environment, which will benefit our party, our country and our people.

A small but positive step. Readout per source: “It’s a social gathering. Abiy promised to open up the political space. He urged the opposition to stick to nonviolence. Appealed to Gadaa tradition and ideals. Expressed regret over recent conflicts that resulted in loss of lives.”

Prime Minister Abiy is on domestic tour following his election on April 2. So far he has visited the Somali regional state where he pledged to end a border conflict with the neighboring Oromia and prioritize the resettlement of more than 1.3 million people internally displaced by the conflict. Earlier this week the prime minister visited the restive town of Ambo in central Oromia, whose name has become synonymous with Oromo resistance, where he called for patience and pledged to address the protesters demands. He is expected to travel to the Tigray state tomorrow to reassure jittery Tigrayan People’s Liberation Front leaders and members, who vigorously opposed his nomination and subsequent election. On Sunday, Abiy is expected to hold a town hall meeting with youth, community leaders and party members at the Millennium Hall in Addis Ababa, Ethiopia’s capital.

The charm offensive appears to be part of an effort by his party, the ruling EPRDF, to ease ethnic and political tensions and regain some lost ground amid depleting popular legitimacy and public support.