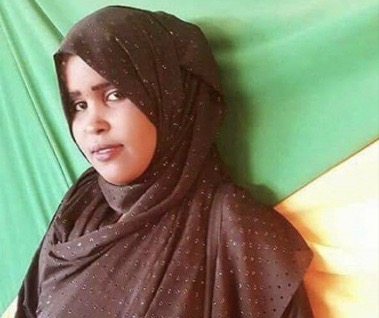 (OPride)—The alleged murder of a young activist in the city of Kabri Dahar, 800km southeast of Ethiopia’s capital, Addis Ababa, has provoked outrage and protests in the increasingly tense Ethiopian Somali State.

The victim, Tayasir Omar-Food was an employee of the Kabri Dahar city kebele 5 office and an advocate of women rights. She was found dead on Friday in what activists say was a punitive measure for her relatives outspoken criticism of the Somali regional government.

According to Rajo, an Ethiopian Somali news outlet, Tayasir was hanged to death after regional security forces detained her. A few hours after she was taken from her home, her body was tossed outside of the police station.

Graphic images of the body, plastered on social media, show a visible wound around her neck — injuries that analysts say is consistent with a hanging. Somali activists on social media say the regional government targeted Tayasir for extrajudicial murder because of her uncle’s outspoken criticism of the state’s president, Abdi Mohammed Omar better known as Abdi Illey.

Tayasir’s uncle, Haji Ali Abdulle Fihiye. His niece was murdered, allegedly to avenge his speaking out against the Somali regional government.

On May 5, Haji Ali Abdulle Fihiye and another delegation of Somali elders discussed regional security matters with Attorney General (AG) Berhanu Tsegaye. The elders reportedly slammed the federal government for failing to protect the Somali population from the autocratic measures of Abdi Illey. One of the elders, who requested anonymity for fear of repercussions,  confirmed to OPride that during the meeting with AG, Haji Ali Abdulle Fihiye decried the increasing reports of rape and other human rights violations perpetrated against women.

The elder added that, Haji Ali pointedly told Berhanu: “We [he Somali people] are used to killings. We can take that. But can you stop the rape of our women?”

Days later, Tayasir was murdered. The killing of a government employee who was striving to improve the dire conditions of women in the region  highlights a culture of vendetta that has become the norm under Abdi Illey’s rule.

Reprisals against the relatives and acquittances of dissidents who criticize the region’s dismal state of affairs are commonplace. In 2016 the Guardian reported the arrest of a number of relatives of the Ethiopian-Somali community in Australia. The crackdown came a day after several of the expats were seen in anti-Illey rally video in Melbourne. Their relatives back home were immediately rounded up and put into prisons in retaliation.

Abdi Illey presides over the regional Liyu Police, a paramilitary force initially established in 2007* to root out the armed Ogaden National Liberation Front (ONLF) rebellion. At least until 2013, the UK government funded the arming and training of the Liyu Police as part of its counterterrorism coöperation with Ethiopia. But Amnesty International and Human Rights Watch have often accused Abdi Illey of using the Liyu Police to crackdown on dissent. With allegations and incidents of abuses dating back more than a decade ago, the Somali State government has a checkered and lengthy track record of extrajudicial killings, rapes and mass detentions.

Among other serious violations, the Liyu Police are accused of instigating the communal violence that resulted in the displacing of more than a million Oromos and Somalis from their homes throughout 2017.

In recent weeks, protests have broken out across the Somali State as locals decry the rampant violations of human rights by state security forces. The state government has taken a hardline approach to the uprisings, killing two protesters in the town of Toj Wajale on May 8. Deaths of protesters have been reported in other towns and localities.

Despite the ongoing crackdown and reports of mounting protester deaths in recent days, the Kebri Dahar youth on Friday took to the streets to condemn Tayasir’s brutal murder.

OPride has been unable to independently verify the images of what appears to show about a hundred people peacefully protesting in Kebri Dahar, while others threw stones at unseen targets. Gunfire can also be heard in the video footage posted by online activists. Meanwhile, Rajo news is reporting that internet service to the city and the surrounding region has been cut.

So far both state and federal officials remain mute on the rapidly devolving security situation in the Somali region.