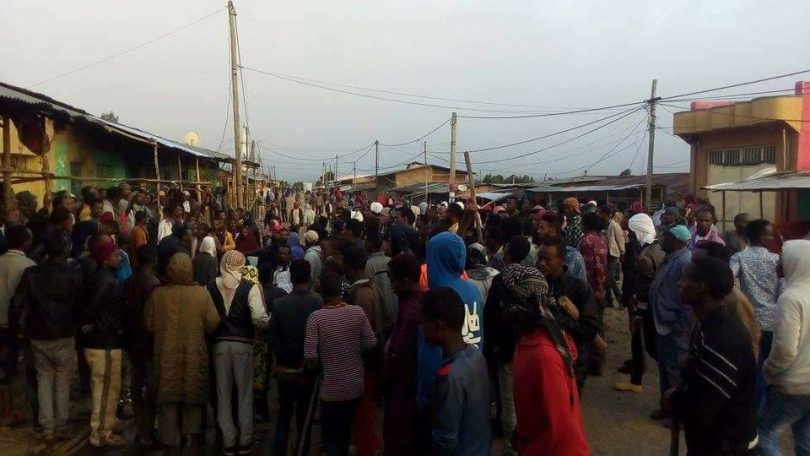 (OPride)—At least four people were killed and five others wounded in renewed cross-border attacks this week by the Ethiopian Somali State Liyu Police in Oromia’s East Hararghe zone. More than 250 houses were razed to the ground and hundreds of civilians are internally displaced, according to locals and media reports.

Oromia and the Somali state share a nearly 900 miles-long porous border. The latest incursions by the Somali paramilitary force into the Cinaksan district, which straddles the common border, is testing Ethiopia’s uneasy calm.

Nearly 30 schools remain closed since the attacks began on May 23 and the learning and teaching process has been disrupted, according to the Voice of America’s Afaan Oromoo program.

Last year, similar raids and cross-border attacks along the Oromia-Somali border by the Liyu police led to the displacement of more than 1.6 million people, mostly ethnic Oromos. Ethiopian authorities blamed the unprecedented violence on rent-seekers and corrupt officials involved in a lucrative contraband trade.

Ethiopia is under a six-month-long state of emergency, which was declared in February ostensibly due to fear of inter-ethnic clashes. The emergency decree was supposed to protect civilians and restore peace and stability following years of unrest. The measure specifically called for the deployment of the federal army in conflict hotspots along the Somali-Oromia border. It also forbids local police and armed militias from operating near the common border.

The ongoing Liyu police attacks inside Oromia are in clear violation of the martial law. However, residents of the Cinaksan district say the military Command Post has failed to stop the attacks by Liyu Police. In an interview with the state-run Oromia Broadcasting Network on Saturday, Dr. Negeri Lencho, the spokesperson for Oromia State, acknowledged the ongoing conflict, as well as the loss of lives on both sides and the destruction of properties.

He lamented that the attackers continue to regroup and rearm themselves even after they are demobilized. He also noted that certain forces continue to secretly supply the Liyu police with weapons reinforcement without specifying.

Lencho said Oromia is monitoring the armed incursion closely and have raised concerns with relevant authorities. He vowed to hold the perpetrators accountable and alluded to plans for people-to-people dialogue to maintain cordial and longstanding Oromo-Somali bonds.

Cinaksan district official, Abdulqadir Dasi, on Friday told VOA the situation is “beyond the control of local authorities” and that his office is appealing to Oromia and federal officials for intervention. People in the affected areas voted to be in Oromia in the 2004 referendum and the counties have been under Oromia’s administration for more than ten years, according to Dasi.

Despite public appeals for peace and reconciliation from Oromia State president Lemma Megersa and Ethiopia’s new Prime Minister, Dr. Abiy Ahmed, the Liyu Police continues to attack Oromo civilians. In his first official act following with his inauguration on April 2, Abiy traveled to Jijiga, the Somali state capital, to defuse ethnic tensions and confer with Abdi Illey. The leaders vowed to end the attack on civilians, initiate communal dialogue and help resettle those displaced in the 2017 violence. Yet armed incursions and cross-border raids continue to occur in many parts of Oromia, most recently in southern Ethiopia’s Moyale district.

Activists now say Abiy’s gesture to prioritize peace and reconciliation was misunderstood and that it is time for the prime minister to pursue “justice” in order to tame Abdi Illey and the Liyu police. The former intelligence officer, Abdi Illey, is implicated in egregious human rights violations in the Somali region, where he has ruled with an iron-fist as the quintessential Big Man since 2010.

Oromo and Somali activists say the renewed Liyu Police attacks led by Abdi Illey and his associates in the military-security apparatus or the deep state are meant to undermine the new prime minister. Regional officials say, unless it is quickly contained, the attacks will used to create a pretext for the extension of the emergency decree in August. Somali activists calling for the removal of Abdi Illey from power have been protesting for weeks.

Similar attacks on civilians and episodes of violence have been reported in the Wollo zone of Oromia region as well. Oromo activists allege the attack is being launched by the Afar State’s police forces.