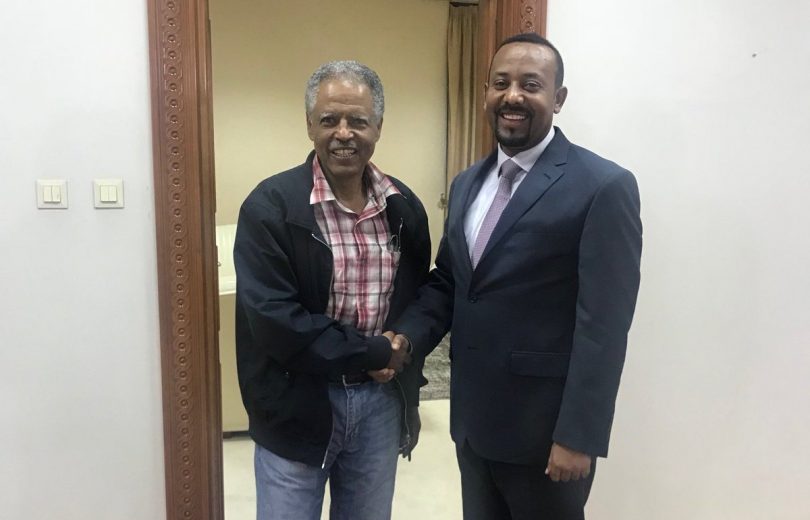 (OPride)—Barely 24 hours after his release from a maximum security prison in Ethiopia, where he spent the last four years on death row, rebel leader Andargachew Tsige on Wednesday met with Prime Minister Abiy Ahmed, who sanctioned his surprise pardon.

It’s a rare conciliatory gesture, unimaginable even two months, by the leader of the long-ruling Ethiopian People’s Revolutionary Democratic Front (EPRDF). Andargachew was nabbed at Sana’a airport in 2014 while traveling through Yemen and forcibly removed to Ethiopia where he was already condemned to death in absentia.

At the palace meeting on Wednesday, the two leaders were all smiles as they shook hands. The photo, released by Fitsum Arega, the chief of staff at the prime minister’s office, broke the internet. Many Ethiopians and diaspora activists seemed shell-shocked by the image and the gesture. Historical, amazing, shocking, huge, unprecedented, photo of the year, bold and remarkable were few of the words people used sharing the photo of the two leaders.

Andargachew’s release from prison and the exuberant reception that awaited him at his parents’ home made global headlines on Tuesday. People knew it was coming, the rumor mill had been fraught for weeks with speculation of his impending release.

But few, if anyone, expected Andargachew to confer with the prime minister until Fitsum shared the image of a man once deemed a terrorist and a threat to national security meeting the head of the state. It led to a warranted outpouring of praise on social media; the image had now gone viral, widely shared and retweeted by netizens around the world.

Prime Minister Abiy has many supporters and skeptics. But with this latest gesture, extending an olive branch to a man accused of plotting a coup against the EPRDF regime, he not only won over naysayers but cemented his sincerity and willingness to reach out across the aisle and engage the political opposition in dialogue. The meeting with Andargachew came a week after he welcomed home members of another exiled opposition party,  the Oromo Democratic Front.

Fitsum’s in his Twitter post stated that Andargachew expressed his gratitude for being granted a pardon. Andargachew would only say that his meeting had left him feeling “hopeful.”

No other details of the discussion between the two men were disclosed. However, it is more than likely that the Prime Minister broached the possibility of bringing Andargachew’s Ginbot 7 into the political fold. On the same day Andargachew walked free, his colleague and Ginbot 7 chairman leader Berhanu Nega, had all charges against him dropped.

Even people reputed as ardent critics of the EPRDF couldn’t help but express their delight at seeing Andargachew being dignified with a meeting at the palace. “Abiy’s pragmatism had him invite a rebel leader to the palace,” tweeted Befekadu Hailu, a prominent blogger and activist in Addis Ababa.

“He has conquered the hearts of Ethiopians. Optimism is skyrocketing!” said his colleague at Zone 9 collective, Abel Wabella. Both Befekadu and Abel have served lengthy stints in prison — for blogging. Such an endorsement from those who have been victims of the EPRDF regime speaks volumes to the sweeping political changes in Ethiopia.

Adulation for an Ethiopian leader on this scale is unprecedented in the EPRDF era. Prime Minister Abiy, who took over from Hailemariam Desalegn barely 60 days ago, enjoys very high approval ratings across the country. Comments and reports on his style of politics and actions have flooded Ethiopian cyber forums while negative banter about his administration is becoming increasingly hard to trace.

EPRDF, in power since 1991, has a global reputation for its razor thin tolerance of political dissent. Protesters, activists, journalists and political opposition have been characterized as terrorists and proxy elements of hostile nations. Security forces killed more than 1,000 protesters in 2015 and 2016 in Oromia and Amhara states. Tens of thousands of political prisoners were thrown into jails often on trumped-up charges. Thousands of these detainees have been freed since January as part of the government initiative to build national consensus.

There are now plans to amend or repeal the infamous Anti-Terrorism Proclamation, a draconian legislation the broadly applied to stifle dissent. Abiy’s administration has signaled in more ways than one that it is serious about shifting away from the party’s established autocratic posture. With the overall direction things are heading in and an iconic photograph for the ages, more and more Ethiopians are daring to dream. That’s a good thing.

Andargachew Tsgie met HE PM Dr Abiy Ahmed today to express his gratitude for the government’s decision to grant him pardon. pic.twitter.com/nIEgaE5PHU

This is HUGE! PM Abiy Ahmed today met Andargachew Tsige—a rebel leader on death row—who was pardoned and released yesterday, per @fitsumaregaa. Yet another clear indication of PM Abiy’s willingness to engage with opponents in #Ethiopia and abroad. Unthinkable EVEN a month ago. pic.twitter.com/hO93ReoJzo

Abiy is moving sooo fast that we are not even keeping track of the changes in #Ethiopia. Sometimes i feel like we are on a political roller coaster.

I am trying to be cautiously optimistic about #Ethiopia but @Dr_Abiy_Ahmed and his team are making it easy to just be SUPER EXCITED about this #NewEra! #LeadingByExample #ኢትዮጵያ ለዘላለም ትኑር ??❤ pic.twitter.com/9lao9YzHtu

This is historic & breathtaking moments for #Ethiopia.We shouldn’t miss this opportunity.Since the new PM @PM_AbiyAhmed has swore in we have begun witnessing developments that have taken us by surprise. I salute the PM for his leadership.@fitsumaregaa #Reconcilation #Ethiopia pic.twitter.com/9PcPY2mSzH