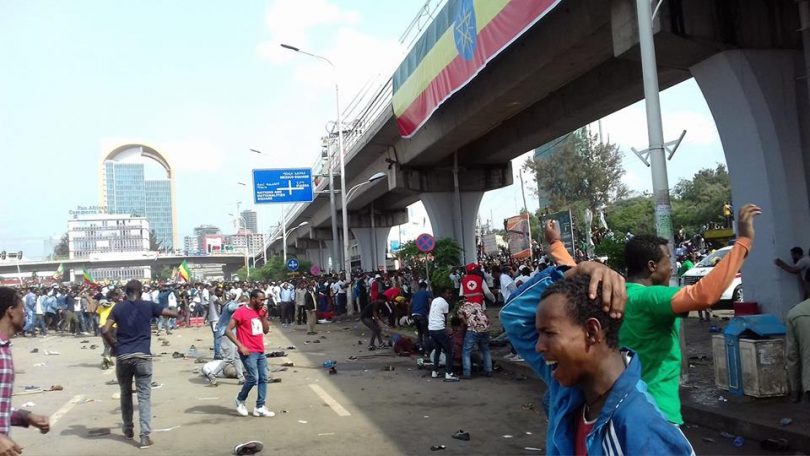 (OPride)— A bomb explosion on Saturday disrupted a massive rally by supporters of Ethiopia’s reformist prime minister Abiy Ahmed. More than a dozen people were injured, according to the Associated Press.

The incident happened as PM Abiy finished speaking to supporters and was due to receive “a gift” from the organizers of the March at Meskel Square in the capital, Addis Ababa. PM Abiy was quickly escorted off the stage. He was unhurt.

In a televised address shortly after the incident, the PM appealed for calm and vowed to stay the course despite attempts to undermine his government’s reform agenda. He sent condolences to families of those who were killed and injured today.

PM Abiy sent his condolences and appealed for calm and unity to defeat spoilers. “Love will win. Forgiveness will win. Killing is a sign of defeat. They failed yesterday. They failed TODAY. They will fail TOMORROW.” He also seemed to suggest that there’s indeed a loss of life.

Extremely concerning!! The PM is fine. He was unhurt. But there was apparently some sort of attempt at the end. A bomb was thrown toward the PM who was being escorted off the stage. Hearing unconfirmed reports that # of people were hurt. https://t.co/RQPR0iBSph

Update: A footage from Ethiopian News agency shows PM #AbiyAhmed whisked away by his security detail. A faint sound of explosion can be heard over the MC who was thanking those Ethiopians watching the program from abroad. The crowd is dispersing and no further alert as of now. pic.twitter.com/Ls0n6oPWIs

It is now confirmed that 4 people have died and scores injured. Police sources assert that this was an assassination attempt on the new Prime Minister. He has been undertaking aggressive and fast tracked reform that have angered some elements within the old guard.

We will overcome hate with love. Some whose heart is filled with hate attempted a grenade attack. HE PM Abiy is safe. All the casualties are martyrs of love & peace. HE PM sends his condolences to the victims.The perpetrators will be brought to justice. #Ethiopia ፍቅርያሸንፋል

Ethiopians are protesting en mass in the capital Addis Ababa. But, ironically, today’s demonstration, attended by tens of thousands from across the country, was organized in support of the ruling Ethiopian Peoples’ Revolutionary Front (EPRDF) and its new chairman and Prime Minister Abiy Ahmed.

It is ironic because some of the same people rallying in support of PM Abiy today were only few months ago protested opposing EPRDF and its repressive policies. So what happened?

Abiy was appointed prime minister in April to quell years of protests that brought the country to the brink of collapse. The 41-year-old leader has since replaced corrupt government officials; he apologized for the security forces killing of protesters; he made a startling admission that his government tortured opponents. Tens of thousands of political prisoners have been freed. He has rejuvenated hope and appealed for unity. His government is trying to turn around the economy. Follow along for updates.

For the first time in decades, the ban on the type of flag Ethiopians want to carry was lifted many felt free to waive the flag they cherish.
“I cannot tell you the hope that sparks in me when I see you Ethiopians who have come together for love, and for forgiveness” PM Abiy pic.twitter.com/nNUkHMlqgi

“Have no doubt #Ethiopia will return to its former national glory. Our quest requires all of us to be active participants & not passive bystanders. Regardless our roles, we all need to engage”whether it is in the government, in politics, in business, in sciences or arts.” PM Abiy pic.twitter.com/HlQBOY1bgH

PM Abiy speaking now: “A leader is nothing without the people. I came today to thank you for the love that you have shown us thus far.” #Ethiopia

Not losing sight of the sacrifices of thousands who were killed, maimed, jailed, and made to disappear without a trace during the 4 yrs protests in #Ethiopia, PM #AbiyAhmed paid tribute to them saying: “They could have lived without us, but we can not live without them!” pic.twitter.com/vosnz7CAYQ

The March seems to be filled with various sayings, quotes, demands and requests, different kinds of flags. Meskel Square is witnessing an unprecedented level of freedom of expression today. #AddisAbebaMarches pic.twitter.com/78D1dpkmuD