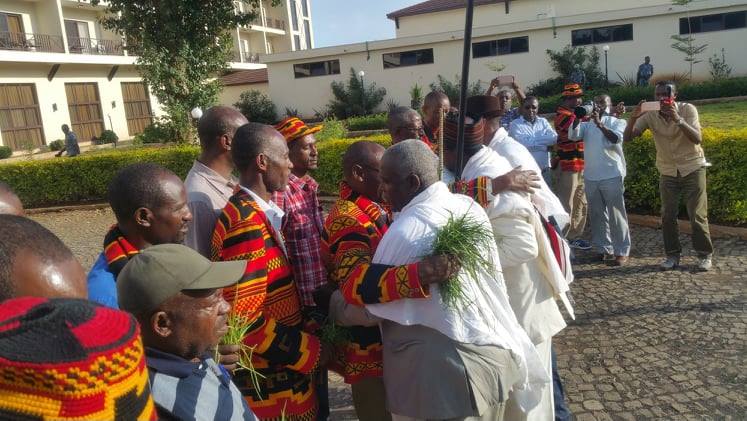 (OPride)— A delegation of renowned Oromo traditional fathers titled “Aba Geda” in Oromo culture are in Arba Minch today meeting with elders of the ethnic Gamo people. The Gamo elders won the hearts of the entire nation when video and images showing them intervening to prevent a mob attack on an Oromo business in Arba Minch went viral. The Oromo expressed gratitude for the show of courage and wisdom by the Gamo fathers who prevented what could have been a horrific episode of violence. Images show the two groups of elders warmly embracing each upon the Oromo delegation’s arrival in Arba Minch. 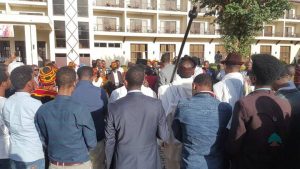 The incident, which occured on September 17th, came after news that individuals believed to be Oromos were responsible for the horrific killings in Burayu that targeted the Gamo minority among others. At least 23 people were killed in about three days of anarchy in the Addis Ababa suburb as gangs went around targeting people hailing from Ethiopia’s southern regions. The violence shocked the nation and prompted the deployment of federal army troops to the affected areas.

In response, outraged members of the ethnic Gamo, Gurage, Dorze and other communities affected by the violence held protests in Addis Ababa, as well as in the southern cities of Arba Minch and Awassa. It is one such protest that turned unruly as angry youths set their sights on an Arba Minch city branch of the Cooperative Bank of Oromia franchise. It was in broad daylight on a Monday when the building was undoubtedly packed with employees that the bank was surrounded. Despite the obvious risk to their own safety and without any police or security personnel present, the Gamo elders and community leaders elected to act. Inserting themselves between the angry mob and the building, they raised their arms and called for calm. Others had palm tree branches and were seen on their knees imploring youths to back off. In the end, sanity prevailed, the rioters obeyed and agree to leave. The gesture touched the hearts of many.

Pleading for calm, the actions of these ethnic Gamo elders most likely saved the lives of people trapped in the building

“We’d like to express our gratefulness to the residents and elders of Arba Minch,” read a message posted by the Cooperative Bank of Oromia on its official Facebook page. “They conducted themselves honourably as per their culture and customs.”

“You won us over,” Oromia State President Lemma Megersa said addressing representatives of the Gamo who were meeting with him and state government officials in the capital Adama. “You knelt in Arba Minch and saved lives, you prevented bloodshed. I would like to offer you and the youths who submitted to you my heartfelt gratitude.

The Oromo fathers will remain in Arba Minch for the next few days at the behest of their hospitable hosts. Joint peace initiatives and fostering reconciliation are on the agenda to be discussed.

“If the Gamo and Oromo, peoples who have lived in harmony for generations don’t solve issues amicably, how would the rest of the country feel?” This is what Gamo elder Aleka Malebo told Lemma Megersa through a translator yesterday in an exchange that was broadcasted on state media Ethiopian Broadcasting Corporation (EBC).