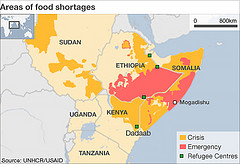 The small Horn of African nation of Somalia has received a lot of international limelight this year. But it wasn’t because of piracy, growing terrorist threat or other issues that we’re accustomed to.

The #hoacrisis, dubbed the worst humanitarian disaster in 60 years, has almost become synonymous with the name Somalia itself. With more than 13-million people already affected by the drought, a child is dying from starvation every six minutes in Somalia, the headlines read.As the world plays catch-up to save Somalia, we’ve forgotten about Ethiopia, a country best known for its famines. The U.N estimates at least 4.5 million people in Ethiopia are currently in need of food aid. As millions of Ethiopians go hungry, Addis Ababa is aggressively promoting foreign direct investment, especially in agriculture. Indian, Saudi Arabian and Chinese companies are vying for a piece of “land” at a price of basically, nothing. Investors like Karmjeet Singh Sekhon, the 68-year-old Indian farm manager in Western Ethiopia, are hoping to cash big splash.

Read the full Story at : Landgrabbing in Ethiopia: Legal Lease or Stolen Soil?