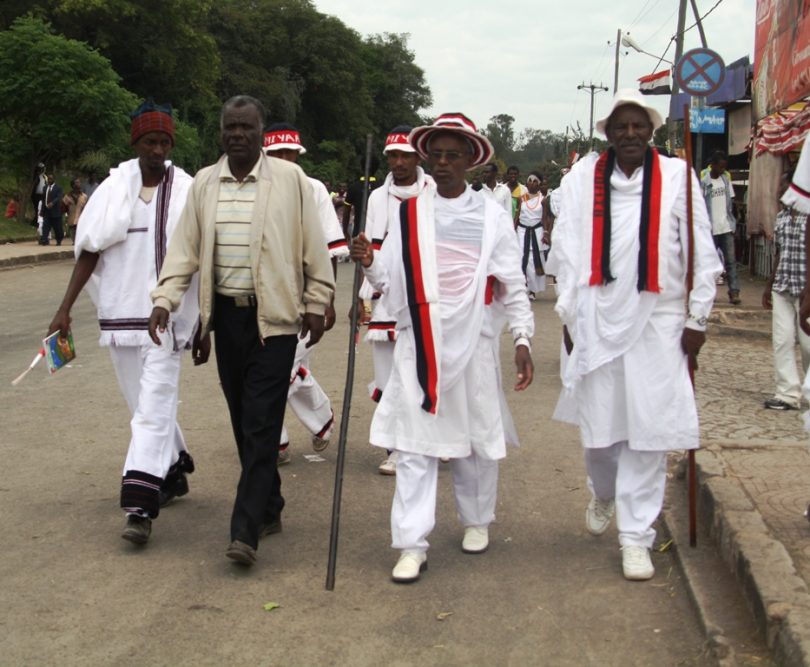 (OPride) – At least 150 arrested and one man died as hundreds of thousands flocked to Bishoftu, Oromia, in south central Ethiopia on Sept. 30 to mark the annual Irreechaa celebration.

Bishoftu, a small town 50 kilometers east of Addis Ababa, Ethiopia’s capital, has become the site of Irreechaa, one of the premier Oromo traditional holidays. Eretcha marks the end of a dark rainy season in the tropics and the beginning of blossom harvest at the dawn of spring (Birraa).


Last Sunday, as spectators and pilgrims, mostly youth, made their way down the narrow asphalt road that leads to Lake Arasadi, the final destination of Irreechaa pilgrimage, regional police closed off all roads to traffic, eyewitnesses told OPride.

Eretcha is to Oromos what Thanksgiving is for Americans. “We celebrate Irreechaa to thank Waaqaa for the blessings and mercies we have received throughout the past year,” writes Waaqefanna.org.

We celebrate Irreechaa not only to thank Waaqaa also to welcome the new season of plentiful harvests after the dark and rainy winter season associated with nature and creature.

Irreechaa is sometimes erroneously viewed as a religious holiday exclusive to the Waaqefataas, followers of traditional Oromo religion, Waaqefanna. However, in the last decade and half, as the number of Eretcha goers grew exponentially, it has increasingly become a symbol of Oromo cultural revival. While there are Waaqefataas who make the pilgrimage for spiritual reasons, others embrace its cultural appeal. This is evident from the number of Muslims and Christians who come from different regions of Oromia – from such far places as Borana, Wallaga, Bale, and Haraghe.

Over the last two years, the government run Oromia Radio and Television Organization have stepped in to cover parts of the celebration live attracting more interest around this massive open celebration. The increased publicity around the event and the “back to nature” mood of the festival have attracted non-Oromo ethnic groups as well as foreign tourists.

The Oromia regional government has sought to take advantage of and use the celebration as a stage to make political statements. The government involvement has been viewed with scorn, at times leading to confrontation. This year was no exception. Even amid an auspicious and festive mood, one eyewitness told OPride, the underlying tensions were visible.

Oromia’s deputy president, Abdulaziz Mohamed, gave speech at the event praising the government for its efforts to promote cultural development. When the youth started chanting antigovernment slogans, the Oromia police rapid deployment forces – covering their face with helmet and holding a plastic shield – stepped in. Later the police was seen dispersing people from the scene amid reports of arrests.

Eyewitnesses contacted by Voice of America’s Afan Oromo said, police setup checkpoints on all roads leading to Bishoftu to prevent people from attending the event. One of the interviewees told VOA; those who wore cultural attires decorated with symbols of the Oromo Liberation Front were singled out and rounded up. Oromia police spokesman, commander Abebe Lagasse, acknowledged setting up checkpoints and searching people, adding, police had the responsibility to stop those who wore cloths or carried writings that sought to incite violence. Police insists only about a dozen instigators were arrested and “one young man died after drowning in the lake.” Activists say at least 150 people have been arrested.

Despite the confrontation, eyewitnesses told OPride, most of the celebration was orderly and went as planned.

Irreechaa has also become a global event, thanks to the ever-growing Oromo diaspora. From Minnesota to Norway, Australia to Toronto, Washington D.C to Düsseldorf , Germany , Oromo nationals have turned out in large numbers to attend this year’s Irreechaa celebration.

Here are some photos from Lake Hora in Oromia (all photos by Tesfalem Waldeyes. Follow him on Twitter @TesfalemW)