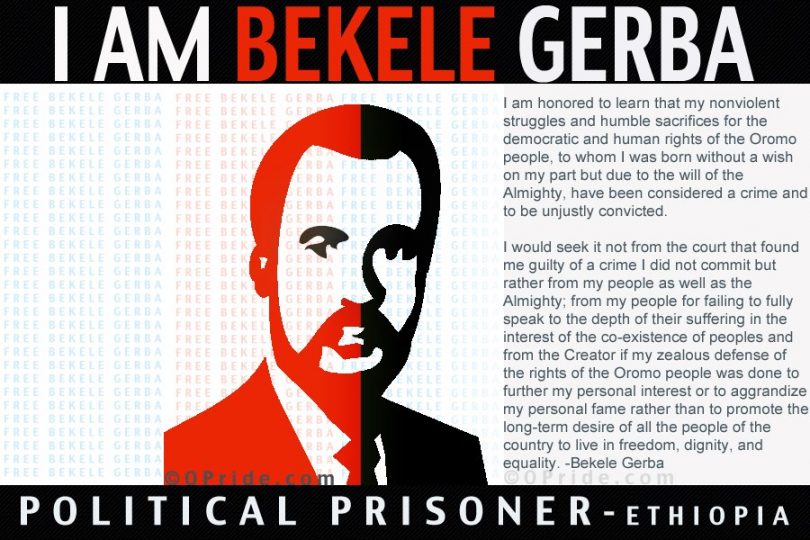 According to Bloomberg News, seven other Oromos were given sentences ranging from three to 12 years “for getting training in camps in Kenya and being involved in gunfights with Ethiopian soldiers.” In the case of Gerba and Lelisa, one of the evidence used by the prosecutor to win a guilty verdict was speaking to the BBC and meeting with representatives of the UK-based human rights group, Amnesty International.

Ethiopia’s little known Kaliti prison smacks of South Africa’s apartheid-era Robben Island, where thousands of Black South Africans including Nelson Mandela spent their darkest days. The brutality of the apartheid system did not stop at sending freedom thirsty individuals to jail; many were also slayed in their quest for freedom.

Later on, after their ‘long walk to freedom’, Robben Island, South Africa’s equivalent of Alem Bekagn, became an iconic spot for the freedom fighters. The political nature of Robben Island’s inmates, the accounts of terrible prison conditions, and the state of prisoners resemble that of Ethiopia’s Kaliti today.

But unlike Robben Island, Kaliti–a notorious prison on the outskirts of Addis Ababa where prisoners dreadfully stockpiled with poor hygiene and visits by family members and lawyer are at the discretion of a bureaucratic prison supervisor–is little known to the world.

Kaliti houses an estimated 20,000 Oromo political prisoners. Oromo students, academics, members and leaders of opposition have been thrown into this jail under concocted charges. Among them, very few are convicted while the majority languishes without proper legal prosecution. Of course, there are also hundreds of prisoners from different ethnic groups, though their number and the cases they were charged with are incomparable to that of Oromo prisoners. The overwhelming majority of Oromo inmates are prisoners of conscience, who were convicted solely based on their political views and membership in Oromo ethnic group.

“It is bad for Ethiopia that so many Oromos are in a prison,” said Bulcha Demeksa in a recent interview with The Reporter newspaper. “Young people, the productive segment of the society are suffering in jails, in tens of thousands, without committing any crime.”

The sheer brutality and abuse of Oromo prisoners at Kaliti has been documented by human rights activists. The case of Alemayehu Gebra, a physically disabled detainee who was shot to death in prison, underscores this enigma. Gerba, an engineering student at Addis Ababa University, was picked up by security forces from class and jailed at Kaliti in Nov. 2005 after opposing the transfer of Oromia’s capital city from Finfinne (Addis Ababa) to Adama. Despite his medical status, Gerba was reportedly tortured on several occasions and was later shot to death after spending four years incarcerated without due process of law.

As previously reported, on November 1, 2012, three years after Alemayehu’s death, Bekele Gerba, a linguist and lecturer at Addis Ababa University, and Olbana Lalisa, opposition leader, appeared in court and were charged under the country’s anti-terrorism law. At the time, Gerba gave a ringing indictment of the court lamenting the lack of justice in Ethiopia and refusing to apologize to the court.  Dr. Merera Gudina, the chairman of Oromo Federalist Congress, who attended the court proceedings, said  the court’s handling of the case was not only bad, but also showed the lack of independence and impartiality of the judiciary.

According to Dr. Gudina, one of the witnesses presented by the prosecutors against the defense, who gave a fake name and stated he is from Wollega, was Gudina’s own party member from Ambo. “This shows how much the rule of law has been undermined,” said Gudina, who teaches Political Science and International Relations at Addis Ababa University.

It has been said time and time again that the road to freedom is long and treacherous.  For the 20,000 fellow Oromos jailed at Kaliti, for demanding basic human and democratic rights,  the darkest days are far from over. The struggle for justice, democracy, and equality in Ethiopia requires of all of us a march along that rough road. In the meantime, “the fighter might be incapacitated or killed but the fighting will continue” until the Oromo and all Ethiopians attain their freedom.

*Obsa O. is a freelance contributor for OPride.com based in Addis Ababa. For questions about this story contact the editor at editor@opride.com.