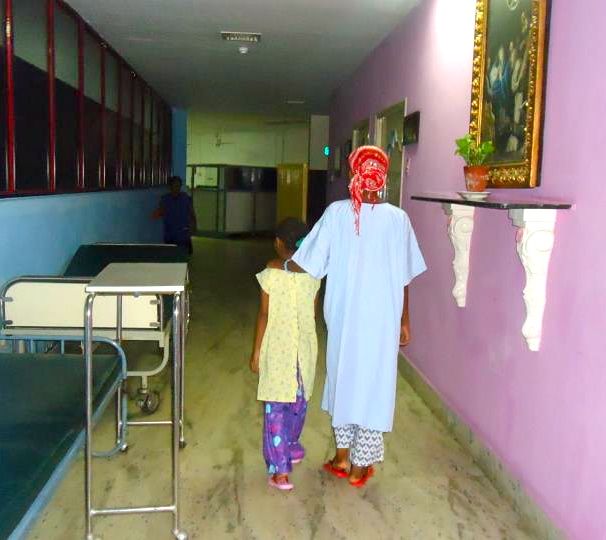 Chaltu Magarsa is only eight years old but she boasts the face of an adult. Having suffered from chest pain all her life, Chaltu’s childhood swung between total despair and unfounded hope. Last year, when Chaltu met Obse Lubo, a volunteer nurse from Central California, she thought, God had sent “an angel” to heal her “excruciating pain.”

In Chaltu’s rural town of Najo, in western Ethiopia, doctors could only offer her pain medications. Relief from a constant pain that robbed her childhood was nowhere to be found. Chaltu’s condition worsened five years ago after her father passed and her mother married another man. Chaltu’s older brother struggled to keep food on the table, a task made impossible by the need to care for his own family and a terminally-ill sister.

“They were truly desperate,” said Lubo who met Chaltu’s family during a medical trip to Najo Hospital a year ago. “After an initial echo-cardiac screening, we knew Chaltu suffered from some sort of congenital heart disease and needed full echocardiographic evaluation.”  The problem? The local hospital didn’t have the capacity to perform those tests.

Lubo and her medical team, which included Dr. Hassan Hussain, a California-based Interventional Cardiologist, randomly selected Chaltu and fourteen other girls from a list of 98 cardiac patients for further  medical examination. After a trip to the capital, Addis Ababa, the  doctors there, among Ethiopia’s few pediatric cardiologists, told them twelve out of the fifteen patients needed a lifesaving heart surgery — a procedure that could not be done in their native Ethiopia. “It all happened too quickly,” Lubo recalled.

She promised to help. The patients traveled back to their villages.

Back in California, Lubo and Dr. Hussain spent the year desperately searching for overseas  sponsors with the help of other colleagues at the Memorial Medical Center in Modesto. Emails and phone calls to children’s hospitals in the U.S. went unanswered.  In July, as Lubo waited to hear back from hospitals in India, one of the fifteen patients met her an untimely death.

Last March, Lubo called Chaltu’s family with news that she had found a sponsor in India for Chaltu’s heart surgery. For six months, the family prayed, planned, and prepared Chaltu’s trip. “I am going to get a heart surgery,” Chaltu told her friends. The only thing that stood between Chaltu and her surgery was a medical visa to India.

After securing the sponsorship, Lubo started preparing for “a trip of a lifetime” –– to accompany the patients to India. But there was another hurdle. Lubo is not related to the three patients that she would be taking to India.

For five weeks, even after Chaltu and the other patients received their travel documents, Lubo pleaded with authorities at the San Francisco-based Indian Consulate for a visa – while trying to get affidavits from parents back in Najo. When, after weeks of arm-wrestling, the officials relented, “I was more excited than the day I received my visa to the United States,” said Lubo, who immigrated to the U.S. from Ethiopia in 2000.

Twenty-four hours later, Lubo was on a flight to Addis. In another 36 hours, she was in Chennai, India with the patients.

Earlier this year, Lubo spoke to OPride.com about her plan to transform Ethiopia’s dismal health care — one hospital and one patient at a time. Now she was responsible for the life of three minors — on a life saving medical trip to a country they only knew by name.

Growing up in Najo, Chaltu knew airplanes only as “big birds” that flew high in the sky, making unusual noises. But when she boarded one of them last month — something she had never imagined — Chaltu was amazed by the size as well as the amenities that were available inside the plane like TV, radio, food, and the bathroom. After an eight-hour flight, they were welcomed at Chennai hospital, where the three would receive their surgery and a second chance at life.

Chaltu’s other two companions, now her friends, are Bachu Benti, 17, and Mulu Jirata, 18. The three first met over a year ago during their trip to Addis Ababa for their initial medical screening. A day after arriving in India, Bachu and Mulu underwent successful heart surgery. They have since fully recovered.

But for Chaltu the India trip was a bittersweet experience. She understands very little of the details — both about her condition and why she couldn’t receive surgery. Lubo is afraid to share the details with her. But the  doctors at Madras Medical Mission Hospital had decided they couldn’t operate on her because she was deemed “high risk.”

“She is a very unfortunate adorable girl,” Dr J. Vimala, the Chief Pediatrics Cardiologist, told Lubo after performing a series of tests.  “Her case is a very high risk and complex situation for us to operate, she will need a heart and lung transplant to save her life, which we rarely perform here on patients her age.”

Diagnosed with severe pulmonary hypertension or eisenmenger syndrome, Chaltu has two options the doctor explained: either to go to the U.S. for a heart and lung transplant or to take two medications which will allow her to live another five to eight years. “I was numb,” Lubo said in an email to OPride shortly after receiving the news. “I don’t know how to explain this to Chaltu, it hurts even thinking about it.”

Lubo is now desperately looking for a sponsor in the U.S. “When Chaltu asked me why she wasn’t getting a surgery,  I choked my tears back, and said, ‘yours can’t be done here, I will find you a sponsor in America,'” said Lubo. “I hope we will find an accepting facility in America to do her surgery, restore her hope, and give her the childhood she has always dreamt off. ”

This week, Lubo took the three girls back to Ethiopia and returned to her full time job in California.

Chaltu went home, but still with a chest pain and to a poor brother who could hardly offer any more relief than prayers. Chaltu is too confused to contemplate the possibility of yet another miracle. Lubo is exhausted but cannot stop hoping for an American good Samaritan to give Chaltu the gift of life.

It could be you.

Those interested in contacting Obse Lubo are advised to use: nejo2009@gmail.com.